It is well into the morning of November 9 when the talking heads begin making the call. Certain now of the results in the pivotal states of Florida and Ohio—as well as Iowa, Nevada, New Hampshire, and even the single electoral vote in rural northern Maine—Fox News leads the way in announcing the result: Donald J. Trump, with a bare majority of 270 electoral votes, is the apparent president-elect, pulling off the greatest upset in U.S. political history by edging Hillary Clinton 270-268 in the electoral college.

The single electoral vote in Maine’s Second Congressional District, having gone to Trump, provides the difference. Clinton’s two-point popular vote victory is irrelevant, as it is the Electoral College that will determine the president. For only the fifth time in U.S. history, the presidential candidate with the most popular votes will lose the election, and for the fourth time, this fate will befall a member of the Democratic Party.

While the postgame analysis centers on how Clinton blew it by running a lackluster campaign and watching young voters peel off in unprecedented numbers to third-party candidates, it largely misses a crucial point: in 29 states, the electors who have been chosen by the voters the day before are not bound by law to vote the way they are pledged.

Somewhere in Texas, an agonizing, six-week decision process has begun for one Republican elector who has been grappling for months with whether he can actually vote for Trump. The elector had previously informed a media outlet that he might consider casting his vote for another candidate if Trump did not sufficiently moderate his behavior. Has Trump met the elector’s standards? Only the elector himself knows for sure.

On December 19, the electors assemble in their respective state capitals and the District of Columbia to cast their votes, and when the counting is done, the biggest political news story since Bush v. Gore has emerged: the Texas elector has cast his vote not for Trump, but for Libertarian Gary Johnson. As a result, no candidate secures a majority of electors, as Trump falls just short with 269 to Clinton’s 268 and Johnson’s single vote. The House of Representatives will decide the president for the first time since 1824.

On January 6, 2017, the House of Representatives meets to count the electoral votes, and then begins the process of choosing the next president. Each state, regardless of representation, gets one vote, and each state must vote for one of the top three vote getters. Johnson, with his single electoral vote, qualifies for the cut.

Although the Republican House majority has been reduced on election day, the GOP still controls 29 delegations. The Democrats control 17, and four are evenly divided. It appears that Trump should win easily—until the states begin voting.

When the dust settles, Johnson has won 26 votes to Trump’s 24 and has been elected the next president of the United States.

Meanwhile, another surprise takes place in the Senate, where Democrats have surprisingly picked up four seats to create a 50-50 tie. In a shocking development, Vice President Joe Biden casts his tie-breaking vote to elect Republican Mike Pence as his successor.

Democrats, fully cognizant that they did not possess enough votes in the House to elect Clinton, approached Johnson on November 9, and quickly struck a deal: they would vote for him in the House election in exchange for key concessions on his selection of a Supreme Court justice. Johnson must choose a justice who will support abortion rights and oppose restrictions on voting rights, such as photo identification. Johnson agreed to the deal.

Johnson then began negotiating with Republican-controlled House delegations from moderate states and states where he performed well, such as Colorado, making whatever promises are necessary to meet the parochial needs of the states. With the 17 Democratic delegations and the four tied delegations agreeing to support him, he needed five Republican delegations to back him, and in the closing hours before the vote, he sealed the deal with the Virginia delegation by promising to support an astonishing infusion of federal money benefitting its many defense facilities and contractors. Though his own Libertarian Party was uneasy with this violation of principle, the opportunity to place one of its own in the White House, and potentially elevate itself to major-party status, at last assuaged such concerns.

And yet, the renegade House Republicans had one further condition before they would support Johnson over Trump. They would agree to the deal if, and only if, Vice President Biden agreed to cast his tie-breaking Senate vote for Pence. Fully recognizing that they could not remain politically viable in the 2018 primaries if they agreed to a deal that shut the GOP out of both the presidency and the vice presidency, these Republican House members demanded Pence’s election to the second spot as their price. Biden, forced to choose between President Trump and Vice President Pence, swallowed hard and agreed to the deal.

And there you have it: the story of how Gary Johnson could actually become president if Clinton’s recent polling slide does not abate, and the current pattern continues to play out.

Mind you, this is not a prediction. While The Party Crasher still expects Clinton will emerge as the victor, her recent unsteadiness has opened the door to the possibility of a surprise. Could anything be more surprising than the House of Representatives picking the Libertarian Party candidate for president? 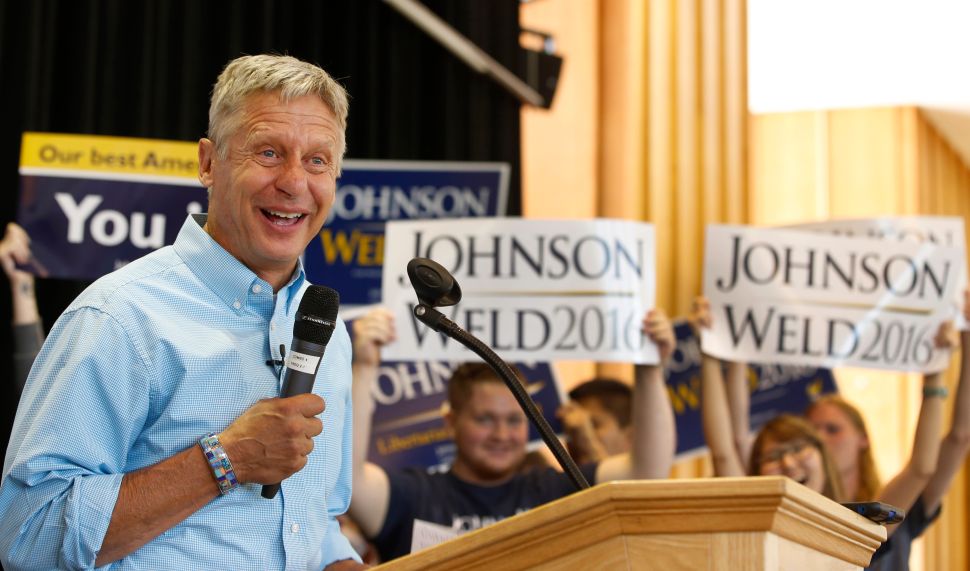