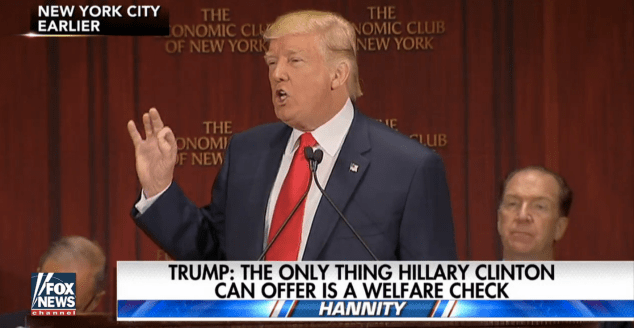 Contrary to his “Birther” campaign of recent years, the Republican candidate for President used about half a minute Friday to say he now believes Obama was born in the United States. But he blended this with the same petty argument used by most playground bullies: “She started it.”

Trump said Hillary Clinton—his Democratic rival—started the rumors about Obama in 2008. This is a lie. Perhaps, in the first presidential debate, moderator Lester Holt of NBC should open by asking Trump:

“Sir, can you please show us your birth certificate?'”

Trump’s Friday morning statement was prompted by a Washington Post story late Thursday night in which he told Robert Costa that he wasn’t ready to admit the President was born in Hawaii.

“I’ll answer that question at the right time,” Trump said. “I just don’t want to answer it yet.”

The statement was so disingenuous that even Fox News Channel—one of its three prime time hosts—had to acknowledge the faux pas.

Trump’s leadership of the “Birther Movement” in 2011 raised his political profile but struck many blacks and plenty of others as racism, a bid to delegitimize the Jackie Robinson of American politics, who was born in Hawaii.

Trump’s flacks like Rudy Giuliani and Kellyanne Conway have insisted lately that Trump is convinced the president is American.

On The Kelly File Thursday night, Megyn Kelly pushed the point with Katrina Pierson, one of Trump’s clumsiest flunkies.

KELLY: “Why, for the love of God, won’t he just say that Barack Obama was born in the United States?”

PIERSON: “He does not talk about that anymore. Barack Obama is not on the ballot.”

Indeed, it didn’t. By late in the evening, just in time for Brian Williams on the new 11th Hour show at 11 p.m. on MSNBC, the Trump campaign issued a statement clarifying Trump’s views.

“In 2011, Mr. Trump was finally able to bring this ugly incident to its conclusion by successfully compelling President Obama to release his birth certificate,” said the statement, signed by senior communications advisor Jason Miller. “Mr. Trump did a great service to the president and to the country by bringing to closure the issue Hillary Clinton and her team first raised.”

This brought a tart response from Nicolle Wallace, a veteran Republican campaign aide who now comments for MSNBC.

“His campaign is rapidly responding to their own candidate,” she said with barely concealed amazement. “This is a clear example of the campaign trying to clean up their candidate on an issue where he does not agree with them.”

Wallace used words like “alarming” and “disturbing” when referring to how this issue stirs up right-wing hate groups and about how Trump can’t bring himself to apologize for it or even acknowledge that his rumor-mongering was false.

“He’s back to listening to his own really strong brain—or whatever he calls it,” Wallace said shortly after 11 p.m.

Prime time began Thursday with speeches by President Obama and Clinton to the Congressional Hispanic Caucus banquet. It was Clinton’s first day back on the trail after missing three days with pneumonia.

CNN and MSNBC covered the speeches live but Fox didn’t, opting instead for the pre-recorded O’Reilly Factor, where host Bill O’Reilly opened with, “It is no secret that most in the media despise Donald Trump and coverage of the candidates reflects that.”

Had you watched only Fox Thursday night, you would not have known that both Obama and Clinton spoke. But at 10 p.m. on Hannity, you would have seen highlights of Trump speeches over the previous two days in New York, New Hampshire and Ohio.

In the Canton speech, Trump got into his growly voice range when mocking Clinton for a dizzy spell she suffered last Sunday at a 9-11 memorial in Manhattan.

Sadly, Hannity didn’t have enough time Thursday to show “Mistah Trump” being interrupted Wednesday afternoon in Flint, Michigan, by a female, African-American pastor who reminded him that he was invited there to give a speech about efforts to clean up Flint’s poison and not to politically attack Clinton.

However, Hannity saved enough time to denounce CNN’s Brian Stelter, who said in a Bloomberg interview that people like Hannity and radio oracle Rush Limbaugh wish ill on Clinton.

For this, Hannity labeled Stelter a “pipsqueak” and said “that’s a lie, a smear, a slander. Basically, a typical CNN day.”

(Note to Hannity: Please read up on the definition of “projection.”)

THE CURIOUS CASE OF JOHN KASICH The Republican governor of Ohio told CNN’s Dana Bash that he will meet with President Obama on Friday to discuss the Trans-Pacific trade deal. They both support it; Trump and Clinton oppose it. Kasich, one of 16 Trump opponents in the Republican primaries, was asked whether he will vote for Trump. “Very unlikely,” Kasich told Bash. “Too much under the bridge.”

“We have a floating con game masquerading as a presidential election,” Barnicle said. “This is beyond bizarre.”

To that, fellow panelist Mark Halperin replied: “You know what else you can say about that guy? He’s up five in Ohio.”

O’DONNELL RIPS ‘THE TIMES’ On Wednesday night, Lawrence O’Donnell devoted several minutes of The Last Word on MSNBC to an examination of how The New York Times chooses its measured words.

The Times reported Trump’s child-care plan and wrote that Trump “stretched the truth” when he said Clinton had no such health plan. Those words were written in large white letters on a purple background as O’Donnell (unlike some MSNBC hosts) quickly got to the point.

“What happens to ‘the truth’ when you stretch it?” O’Donnell asked. “Do you still have the truth? We know what The New York Times was trying to do there. They were trying to point out that Donald Trump was lying without saying the word.”

O’Donnell the style guide of The Times doesn’t like that word, especially to describe politicians.

“No form of the word ‘truth’ belongs in that sentence in The New York Times,” O’Donnell said. “They could have told a very clear truth to their readers. Donald Trump could not talk about his own brand-new policy without lying” about Clinton’s.

O’Donnell said the media, in general, “discounts and diminishes and normalizes the wild, out-of-control impulsive reckless lies of Donald Trump.”

Speaking specifically again of The Times, he said: 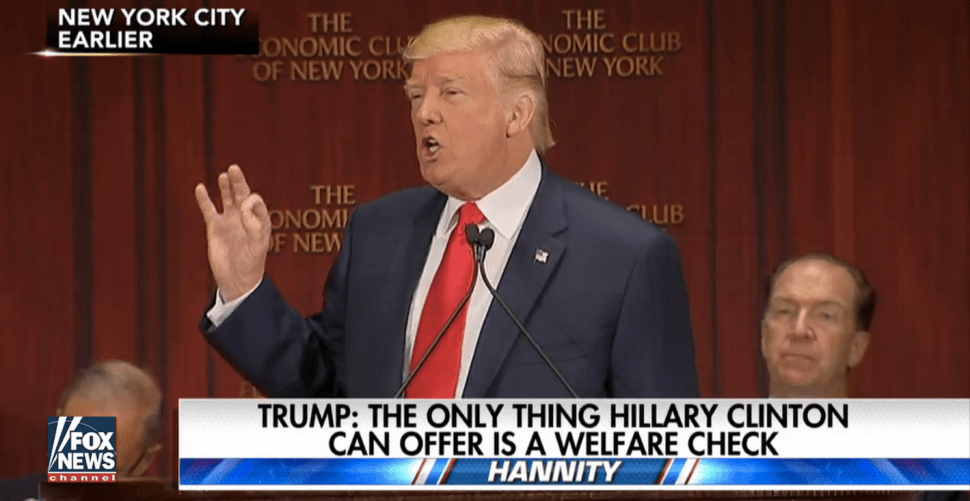