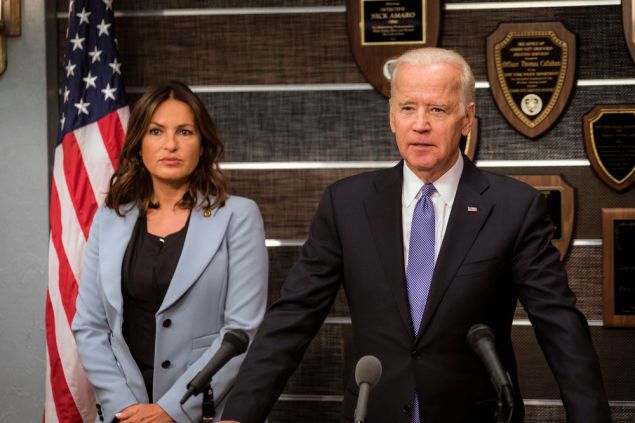 Well, well, what can you say about an episode of television that opens with one of the highest ranking officials currently in office making a positive speech and closes with Sgt. Olivia Benson uttering a curse word? A lot, because plenty of stuff went down between the beginning and the end of this hour of SVU.

This episode of SVU opens with the Vice President of the United States (yes, the actual current VP!) praising the SVU’s efforts to eliminate the rape kit backlog, singling out Sgt. Benson’s work, as she stands next to him.

Benson announces that in clearing the backlog, they have taken criminals off the street, prevented future crimes, and given victims closure. She also says that they have righted a terrible wrong. 16 years earlier Sean Roberts was convicted of a rape he didn’t commit. Rape kit testing had identified the real rapist and he was exonerated.

Sean is standing in the squad room for the announcement shoulder-to-shoulder with Melanie Harper and her grown daughter, Ashley. Melanie is the woman who accused Sean of rape all those years ago. Now, she and Ashley want to make amends and tell everyone that they’ve invited Sean to Ashley’s upcoming wedding. The trio then leaves the squad room to go out and celebrate Sean’s birthday.

In the very next scene, Fin and Rollins roll up to Melanie’s place where it quickly becomes clear that Ashley has been assaulted. She was raped, strangled, stabbed and doused in bleach. Melanie tells Fin that she heard a man’s voice in the house with Ashley, and she thinks it was Sean.

Fin fears that Benson will pull him off the case but she says she needs him on it and that she doesn’t want to give credibility to Sean’s lawsuit (Assuming here that said lawsuit is against the department? There’s a little clarity missing in this area…)

At the hospital, Melanie recalls that Ashley’s engagement ring wasn’t on her finger after she was attacked. In the next moment, Melanie learns that Ashley has succumbed to her injuries.

Fin and Rollins head over to Sean’s place and tell him about what’s happened to Ashley. He appears surprised by this and immediately says, “Ashley’s dead! Melanie must be freaking out.” Asked for an alibi, Sean says he was at a strip club with a buddy.

So, Fin and Rollins check in with Sean’s buddy. Fin applies a little of his signature ‘charm’ and the dude quickly rolls on Sean, saying that he wasn’t with Sean, that Sean had JUST called and told him to say that. The dude also reveals that Ashley had been upset because her fiancé was threatening to break off the engagement.

Cut to said fiancé, Zach, getting the third degree from Carisi and Rollins (That Rollins is really working hard on this case! She’s everywhere!) Zach is all teary but then Rollins reads his texts about breaking up with Ashley in which he demands his ring back. He maintains his innocence, saying he was at a bar the whole night.

As Carisi clears Zach via a bartender, Fin says what everyone is thinking; that no one wants to believe Sean is good for this crime.

Another suspect pops up, a neighborhood peeper, named Charlie, who’s a little slow but who happens to possess the kitchen knife that was used in Ashley’s murder. Carisi and Rollins work hard to get Charlie to confess, but his girlfriend shows up with time stamped video of the two of them having sex at the time of the murder.

Charlie goes from suspect to a witness when the detectives find out he saw the killer drop the knife and he picked it up. While working with Charlie, Rollins sweet-talks him a little to help him with his memory.

After Charlie (a bit reluctantly) identifies Sean, the team heads to Sean’s apartment where they find a few things, namely Fin locates Ashley’s’ engagement ring in the sink drain. Sean is promptly arrested. As he’s being lead away, he yells out, “I was innocent then! I’m innocent now!”

As Barba questions the evidence, and the fact that Fin was the one who found the ring in the sink, enter (slimy) defense attorney John Buchanan to act as Sean’s counsel.

In interrogation, Sean jumps up and insists that he wouldn’t rape Ashley, that he knows what it feels like to be raped, indicating that he was raped in prison.

Lots of testimony in the courtroom ensues, including a psychiatrist who says that someone with Sean’s profile – long incarcerated and repeatedly brutalized – would have almost no chance of properly reintegrating into society, Charlie who at first seems competent becomes a shaky, unreliable, witness. At one point, Charlie implies that detective Rollins ‘helped’ him with his testimony.

After a shouting match ensues between Barba, Carisi, Benson and Rollins, Barba says they need to double down on the physical evidence. Fin, on the stand, talks about finding the ring and his past with Sean. Fin continues to assert that he did his job correctly in the past and that he’s doing it correctly right now.

Melanie is still holding onto hope that Sean is innocent. She says she was so sure last time and then she was wrong and she now feels she just can’t trust herself. She says she doesn’t want to testify.

But Barba won’t hear of it and calls her as a hostile witness. On the stand, Melanie reiterates that she’s afraid to be wrong again. That because of her Sean is now a monster, after being in prison for so long.

In the end, Barba gets Melanie to confirm that she did hear Sean in her house that night.

With this final piece of evidence, Buchanan comes to Barba to work out a plea agreement. Benson insists that the plea include Sean’s allocution of the crime in court. All agree that Sean will serve 15 years.

In the courtroom, Sean tearfully tells all, especially Melanie, that he’s sorry, that he cared for Ashley. He explains that that night he was drunk, he wasn’t used to that. When he told Ashley that he liked her, she laughed at him, and that was it. He went on to say, in an impassioned manner, that he ended up doing those things to Ashley even though he didn’t want to, it just happened. He proclaims that prison made him this way. Melanie can’t take anymore and rushes from the courtroom.

Outside, Melanie tells Benson that at least this time she knows he did it. Benson tells her it’s not her fault, to which Melanie replies, “then whose is it?”

Benson tries to make sure Fin’s ok and he replies that he is, that the bad guy went down. She offers to talk, and he, in true Fin fashion, quickly responds that talking is overrated.

At episode’s’ close, Barba says that that justice isn’t pretty some days, to which Benson responds, “Damn ugly this time.”

And there is it – Benson accurately summarizing what had transpired in the pursuit of closing this case – some damn ugliness.

It was ugly to see Barba waiver in his belief in Fin, Rollins almost get hung out to dry for ‘helping’ a witness remember some things, and the whole team running here and there trying to believe that a guy just released from prison after being wrongful convicted DID NOT commit a crime.

What wasn’t ugly was seeing Fin stick to his guns that his work ethic and attitude are continually on the level, watching as this episode explored the (often horrible) effects of long-term incarceration, and how it had a nice ‘mothership’ feel in that the hour was very nearly exactly half investigation and half courtroom drama.

Also worth mentioning was the performance of guest star Kelli Williams, who has to be one of the best, most believable, criers ever on television. Not only that, she takes portraying the emotion of an extremely conflicted individual to a new level. All of this begs the question – Why is this woman not currently on a TV series? In short, one of the best television actors there is, and she sure showed it here.

Kudos to Henry Thomas as well for accurately playing Sean in such a manner that the character was able to garner sympathy and be a terrible person at the same time, and every bit of it was absolutely plausible. That’s not something that’s easy to do but Thomas did it extremely well in this episode.

And then there’s that other guest star. He only had one scene but it was pretty memorable. Well, that’s really all it takes when you’re the Vice President of the country, right? You come in, make a big statement and that’s all you need to do to make everyone, on-screen and off, feel cool and good about what they’re doing.

Talking about this a bit, Sgt. Benson’s Mariska Hargitay said, “Well, it was a little blurry for me there. I am an advocate in real life. I am trying to change laws….” Then she laughed as she said, “Yeah (in that moment) I was like, ‘hey, am I Mariska Hargitay or Olivia Benson right now?’”

Executive Producer Julie Martin then jumped in to say, “We wrote the line, ‘I want to thank my dear friend Olivia Benson,’ and a couple of times I thought he was going to break character and say, ‘Mariska Hargitay’ instead. I think he was close to doing that a few times.”

Hargitay went on to say, “It was incredible for me to see my personal life and my work life collide and intersect in the most perfect way — the Vice President of the United States was on our show, which was obviously a secret dream of mine. He was so excited and wanted to be here and that was deeply meaningful.”

Martin sort of laughs and lowers her voice a little as she reveals, “He went over by 20 minutes… But you know what, you let the VP go over if he wants to!”

Again Hargitay is laughing as she interjects, “Yeah, you just don’t say, ‘Hey Joe, we’re going have to cut you off here!’”

In the end, Martin concluded that Biden’s presence was more than just a guest star stunt. “It was really awesome to hear him say, ‘you guys are doing really important work in the world.’”

It’s a safe bet that everyone can agree there’s nothing ugly about that. In fact, it’s damn fine. 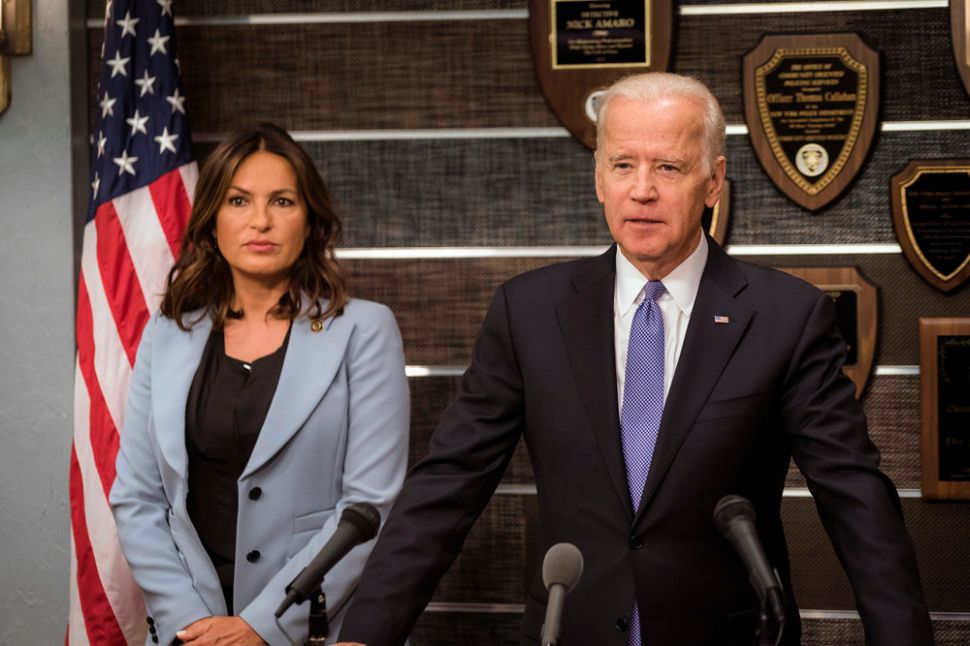