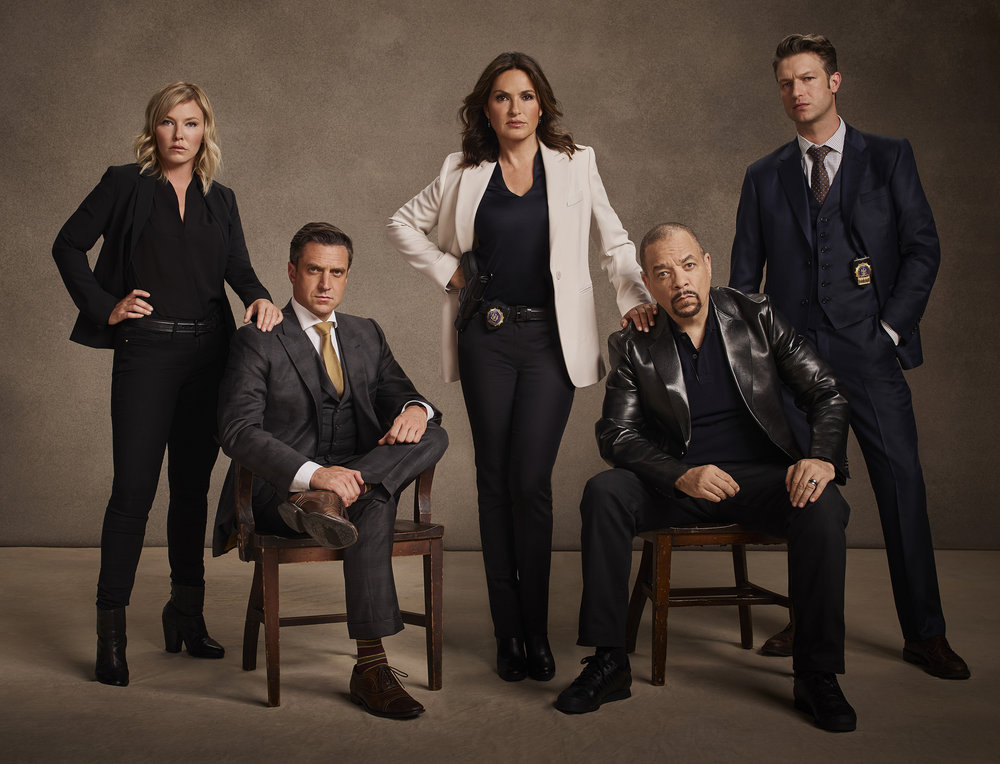 What is there to really to say about a show that’s been on the air 17 (!) years? According to the stars and Executive Producers of Law & Order: SVU – a lot.

The series has undoubtedly earned a very special place in TV lore. No, it’s not the longest running show in television history (well, not yet anyway, give it a few more years), but it is currently the longest running network drama, and it shows no signs of slowing down.

“We’re going to continue to tell great stories every week and you can count on that,” says EP Julie Martin.

Leading the cast, as she has for every one of the shows past seasons, Mariska Hargitay as (now) Lieutenant Olivia Benson, says that the success of the show is first and foremost due to the fans devotion to it. “I’m not surprised that people keep watching. I always say that this is a show that respects it’s audience and you can trust it; you can trust the writing, you can trust how you’ll feel, you can trust that you’ll be forced to think and really weigh stuff out. I think it challenges, pushes boundaries, makes us think about different sides, and [all of that] resonates deeply in our humanity.”

Behind the scenes, there were a few changes after last season ended, most notable was the departure of showrunner Warren Leight, who led the team for the past five seasons. Veteran Law & Order producer Rick Eid has stepped in to fill that role going forward.

Ice T, who portrays longtime SVU detective Odafin ‘Fin’ Tutuola, laughs as he says, “I said to him, ‘we’re on season 18, don’t fuck this up!’ But seriously, we’re a few episodes in now and I don’t see any difference [compared] to what we were doing before. The pressure is on him [in a way], but he’s such a cool guy. He didn’t come in and say, ‘we’re going to change shit.’ There was none of that. The regime change [has been] very mellow.”

In the emotional season 17 finale, the SVU team lost one of their own as Detective Mike Dodds was shot and killed during a domestic violence incident.

In light of this Eid says that this season features ‘a kind of protect-thy-brother theme.’ He went on to say, “I feel on this show it’s always about hope and healing and that’s really our overarching theme, but this season, particularly for Olivia, she lost one of her men and right now her instinct is to protect and help everyone heal. So that plays a big part of what’s happening within her life and for everyone in the squad room.”

Hargitay quickly agrees, adding, “[Dodds’ death] informs everything for her. She becomes a little overprotective while dealing with the guilt and pain. They had gotten very close and he was one of her own so I think there’s an underlying fear that she has to do everything and put herself out front and protect everyone at all costs. That’s rough [for her].

Adding another level to that strain is the obvious tension permeating the relationship Benson has with her superior, Chief Dodds (Peter Gallagher) who is Mike Dodds’ father. “It’s all very human between Benson and Dodds,” says Hargitay. “It’s painful and complicated and multi-layered because they’re both parents, and they’re boss and employee. This [storyline] is different for us. We haven’t done anything like this so it’s very interesting.”

Aside from this, there will be plenty more relationship drama happening in and out of the squad room, say the cast members.

“Well, Fin is finally going to take the Sergeant’s’ exam,” reveals Ice T. Then he laughs as he says, “He’s doing that ‘cause the writers wrote that! But seriously, I think they’re trying to move me and Mariska to more leadership roles because the show has to continue to morph to stay new. So you roll with it.”

Kelli Giddish, who plays Amanda Rollins, explains what’s in store for her character, saying, “Well she’s a new single mom. She has no patience for a couple of cases that are coming through and her sister Kim is coming back to town. As you’ll remember, Kim went down a very long road and dug herself a big hole [and dragged Amanda down with her] and Amanda has to continue to deal with that.

As for Rollins now spending time outside of the precinct with fellow colleague Detective Carisi (played by Peter Scanavino), Giddish says, “I think they’re certainly great friends. That’s kind of something special to play; having a really good friend, especially someone in the unit. [What we do at work] is so dark and heavy, you do need someone to flush it out with. I really cherish those little moments that they’ve given me and Peter, like when we’re [with the baby] just watching TV and stuff.”

But will the relationship move beyond just being friends? Scanavino says, “Well, I feel like it’s a very earned relationship. When I came on the show Rollins in particular didn’t like me. I think Carisi’s very loyal and since they’re in the same squad he never took offense to that. And, now they have this very organic friendship. They really get each other, respect each other and lean on each other. There’s a lot of chemistry between us as friends, and maybe something more. Who knows what’s going to happen? There are a lot of possibilities.”

Carisi’s other budding relationship, an unlikely but potentially prosperous one, is with ADA Raphael Barba, as played by Raul Esparza. After Carisi passed the bar exam last season, he shadowed Barba a bit to try to glean some of the ins and outs of the legal profession from the quick-talking sharp dressed attorney.

About the relationship, Esparza admits, “I don’t think [Barba’s] a very good mentor, but I loved the way the Carisi/Barba stuff played out. I didn’t respect him at first and then little by little I began to respect him.”

Esparza and Scanavino are both happy with the evolution of this relationship, says Esparza. “They started really writing for us and I remember we had a moment were we looked at each other we were like, ‘oh they’re giving us some really good stuff!’”

Most viewers would agree that the strongest relationship Barba currently has is with Lieutenant Benson. About this bond, Esparza relates, “You know what makes good TV? It’s when people argue and then get along. So this season there will be friendship and then there will be anvils [tossed at each other]. We’ve already done an episode where she gets me to do something I don’t want to do. I [often] have to make political decisions that she hates. I love that – it’s hard to be angry at a friend so it’s delicious stuff to eat up as an actor.”

He’s also a bit startled at the fans reaction to this pairing, saying, “It’s been amazing to see how fans have responded to us as a team. I never thought when I joined this cast that people online would talk about ‘Barson.’ Our natural inclination was that they would always be at odds because he doesn’t have her compassion. Over time they’ve written these characters in a way that have changed each other; he made her tougher and she made him open and sympathetic. Now they’re friends that call each other out. I love that play of power struggle with her.”

From her angle Hargitay says the friendship is a deep and complex, but ultimately, realistic one. “Olivia and Barba really are like best friends and that’s why it gets so heated because it’s such a personal relationship between them and keeping that line between friendship and professionalism and loyalty, it’s very complicated. She’s like ‘hey, you know me better! How dare you! You know me!’ I think that’s a beautiful, always conflicted, relationship.”

The other man in Benson’s life is her current love interest, Lieutenant Ed Tucker. Discussing what’s in store for them this season, Hargitay began by discussing last season’s finale. “I cried reading that episode. It was so sad because we’d come to love Dodds and it was so dark… and then there was this light [in what happened with Tucker]. Which is just like life, right? It’s not all good; it’s not all bad. It’s complicated and layered and nuanced and that was such a beautiful ending to that episode. This year is plagued with guilt and pain and responsibility. I think Olivia’s maybe not fully available because she’s trying to be a parent and protect the squad and then also feeling guilty about being happy. He’s changing jobs and she’s the big boss, so it’s about how can these parts fit together? We’re not going to run off into the sunset, but she wants desperately for this to work and desperately to be a family. As in all relationships, it’s just really complicated and we’re going to see that this season.”

In addition to her connection with Tucker, might Olivia finally have a female friend in her life? “Oh we’ve been talking about that a lot,” says Hargitay quickly. “And, we have ideas of certain [actors] in mind. But yes, I would love that.” To this Julie Martin adds, “That’s something we’re going to explore,” and as an Executive Producer, a clear decision-maker on the series, this means that it could actually happen!

For Hargitay, she admits that she’s still energized even in this, the 18th season of the series, for many reasons, but the main one is due to the impact that Law & Order: SVU has had in the public consciousness. “I think that talking about the issues that we present on the series is literally changing the culture. When people ask me what they can do, I say, ‘the biggest thing you can do is start a conversation – talk to your kids, talk to your friends.’ Because the people who are victims of these issues suffer from isolation, and just the fact that it’s part of the conversation is changing that.” 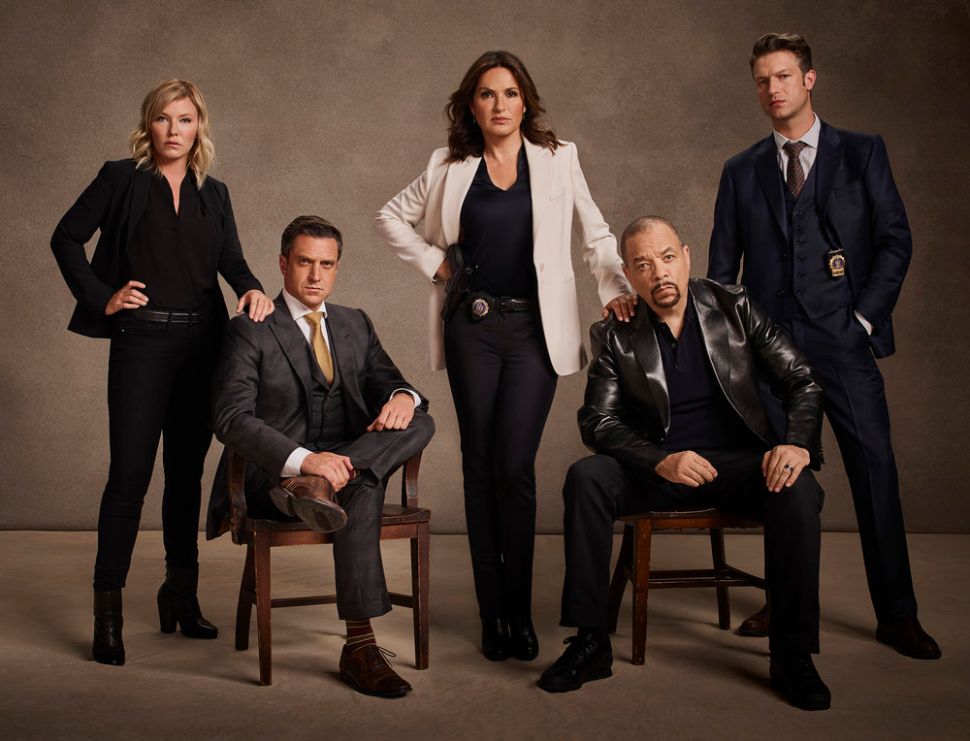