“Welcome to the opera. The ice cream truck will be open in just a few minutes.”

I’ve longed to hear these words most of my life, and Friday night, my wish came true as I arrived at LoftOpera’s rollicking production of Mozart’s romantic comedy Così fan tutte.

As always with the innovate LoftOpera troupe, the venue was not a conventional theater but rather an industrial space, on this occasion a vast warehouse on a lonely block of East Williamsburg. The ice cream truck huddled in one corner of the colossal room, with the tiny performing area the better part of a city block away. Curiously, the surrounding gloom only made the opera proper feel all the more intimate. That’s just right for this piece, a bittersweet musing on love and sexuality.

On the surface, the plot of Così is right out of I Love Lucy: two young men decide to test their girlfriends’ virtue by disguising themselves, switching partners and doing some serious seducing. When, in less than 24 hours, the girls give in, the guys are philosphical: “Così fan tutte,” they conclude. “All women do that.”

Director Louisa Proske’s staging proffered some very good ideas that were less than fully developed. In this production, the “young lovers” were very young indeed: high schoolers, in fact. When the young men disguised themselves, they did not appear, as in the original libretto, as exotic “Albanians,” but rather as middle-aged investment bankers. Thus the teen girls ended up having sex with—so far as they knew—men old enough to be their fathers.

The resolution of this disturbing, not to say depraved situation felt a little too pat as Proske staged it, with everyone quick to forgive. Until then, though, this was a Così that scored as lively entertainment, which is a lot more than you can say about the Met’s recent production of this work.

So high has been the level of the orchestral performance at this company since its inception that the delicate, flexible playing of this tricky score under the direction of Dean Buck felt almost automatic . You have to remind yourself just how rare and precious this kind of excellence is.

As is also generally the case at LoftOpera, casting was both offbeat and deeply satisfying. Megan Pachecano as sensible sister Fiordiligi sang the difficult virtuoso music with a light, tart soprano, complementing the warmly romantic vocalism of Sarah Nelson Craft as the younger Dorabella. Opposite them tenor Spencer Viator’s thrilling build to blind rage in the second act made me regret the omission of his aria “Tradito, schernito.”

As Don Alfonso, instigator of the sexual experiment, Gary Ramsey took some getting used to with his robotic delivery of the recitative, but he cut an effectively creepy figure in the role, done up like something out of a David Lynch dream sequence. Despite a scratchy throat, Michelle Trovato came close to stealing the show as the bawdy cleaning lady Despina, her performance a thousand hilarious variations on “seize the day.”

I say “came close,” because the undisputed star of this evening was Alex DeSocio as the happy-go-lucky Guglielmo. His richly-colored baritone, immaculate musicianship, flawless Italian diction and magnetic stage presence added up to something close to perfection.

I hope LoftOpera will jump at the chance to cast DeSocio again. And they’d better do it soon, because in a couple of years they’re not going to be able to afford him. 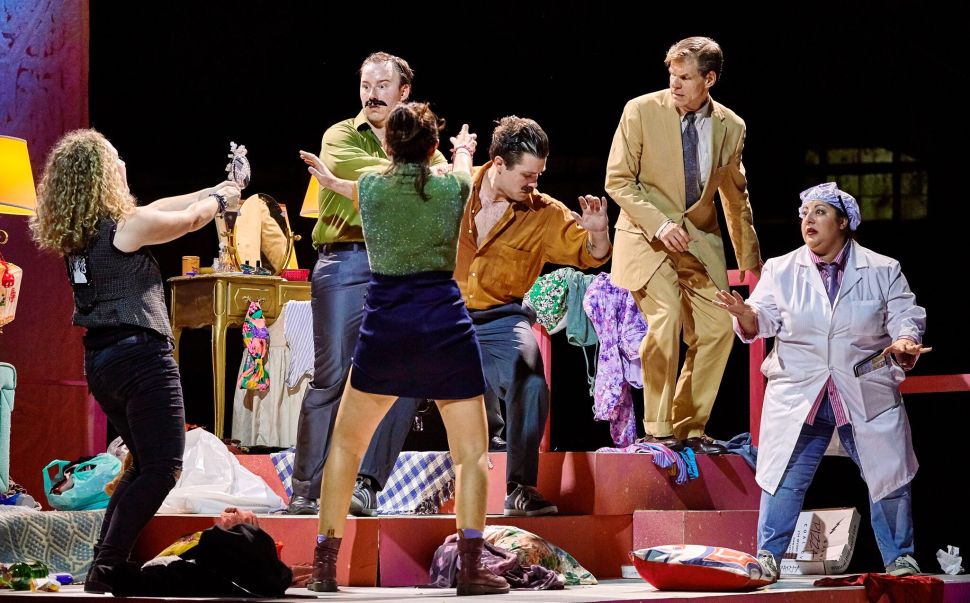