The abrupt cancellation of a City Council committee vote on domestic violence legislation this morning due to severely low attendance has reignited the debate on what it means to be a full-time Council member.

The hearing, held by the Committee on Public Safety at 10 a.m., was cancelled by 10:45 a.m. due to a lack of quorum—the number of members required for a vote. The only committee members in attendance were Chaim Deutsch, Steven Matteo—whose wife was scheduled to have a baby today—James Vacca and committee chairwoman Vanessa Gibson. (Gibson showed up late.) Councilwoman Laurie Cumbo, who does not sit on the committee but sponsored a bill up for a vote, was also in attendance.

Absent members were Ritchie Torres, Rory Lancman, Vincent Gentile, Rafael Espinal, Julissa Ferreras-Copeland, Robert Cornegy and Jumaane Williams. (Lancman and Gentile were at 9/11 events; Torres had meetings with a precinct commander, the Bronx borough president and a HUD director; and Williams was at a street co-naming for a gun violence victim, according to their offices.) Absent members said they were notified of the vote less than 24 hours before its scheduled time.

Vacca, one of the few Council members in attendance, said he is certain the bills will receive a vote next week. He agrees that the notice was late and said they typically receive notices “more in advance” but felt the vote was too important to miss.

Vacca said it was “frustrating” to have spent an hour-and-a-half traveling and another hour waiting for a quorum that never came, but that he sympathized with the Council members’ commitments.

“I feel that being full-time means at City Hall and in your community,” Vacca told the Observer. “So if the members that you spoke to indicated that what they were doing in the community was important, I think that’s part of being full-time. I would not attack them for that.”

Ferreras-Copeland, Cornegy, Espinal, Matteo, Gibson and Cumbo did not respond to requests for comment.

Deutsch said that this is the first time in his experience a large number of Council members were absent, noting that the Council members had legitimate reasons for not being there. He said that as long as the vote takes place before the next stated meeting—if it goes there for a full vote—that’s all that matters.

“No, it’s the first time it ever happened and this Council, you know, this Council is pretty committed and dedicated to their constituents,” Deutsch said.

This comes after the Council voted to raise its salary from $112,500 to $148,500 a year, a need to officially make serving as a Council member is a full-time job. During a lengthy hearing where they justified voting for their own raises, several Council members pointed to the long hours they work.

Crains New York’s Rosa Goldensohn, who was in attendance as the committee sought to hold its meeting this morning, tweeted that Deutsch said, “This is a full-time job and people are not here. You get a raise—” followed by Cumbo cutting him off and saying, “Heyyyy.” But Deutsch said there was no malice in his comment.

“Well I’m not an angry type of person,” Deutsch added. “It was said jokingly.”

But Torres was irate about the buzz the botched committee meeting generated, telling the Observer he’d be happy to comment on the matter if it is about “the dysfunctional scheduling of committee hearings.”

He had a meeting with a precinct commander concerning a pattern of burglary and assaults against senior citizens at 10 a.m.—a meeting he said “has been on the books for a week”—and another meeting at 11 a.m. with Bronx Borough President Ruben Diaz Jr. and the HUD regional director about the New York City Housing Authority.

Though he acknowledged that votes tend to have shorter notice, he found the scheduling of this vote “particularly egregious” because it was scheduled on a Friday in the 11th hour when members are typically in their districts.

A spectacle could have been avoided—and a quorum achieved—if the vote had been scheduled the morning of the stated meeting, he said.

“If you take it out of context, you can easily create a dishonest narrative of a lackadaisical City Council,” Torres said.

And concerning Matteo’s decision to come despite the imminent arrival of a child, Torres said how members choose to juggle conflicting commitments is up to them.

“It’s important to attend a committee hearing…also important to meet with elected officials about your core issue,” Torres added. “You have to decide what is the best manner in which to expend your time.”

Deutsch did not seem to agree, though he insisted that the hearing taking place two or three days later won’t change anything.

“No, I don’t agree because when something’s in our schedule,” he said. “If something is important to be held right away, OK, no matter what prior commitments, you have to be able to juggle and make sure you get everything done.”

Travis Lamprecht, Gentile’s communications director, said he was participating in a 9/11 ceremonial event at the U.S. Army Garrison at Fort Hamilton in Bay Ridge.

“First of all, he’s cosponsoring three out of four and he’s going to co-sponsor Intro 869 and he plans to vote affirmative on all the bills on the calendar,” Lamprecht said.

In an emailed statement, Lancman said it was not possible to skip the event.

“I was at a 9/11 event in my district, which obviously couldn’t be rescheduled,” Lancman said.

Williams’ communications director,Vania Andre, said he had to attend a street co-naming for D’aja Naquai Robinson, a 14-year-old girl who died after she was hit by a stray bullet while she was on a bus in Queens—a commitment he made a few weeks ago.

Shortly after her death, Williams had co-started the Council’s Gun Violence Task Force, which eventually became the Crisis Management System—which made it all the more personal for him, Andre said.

“I can’t speak directly to that but what I do know is that this is an issue that the council member is strongly passionate about and his legislative record shows that,” Andre said. 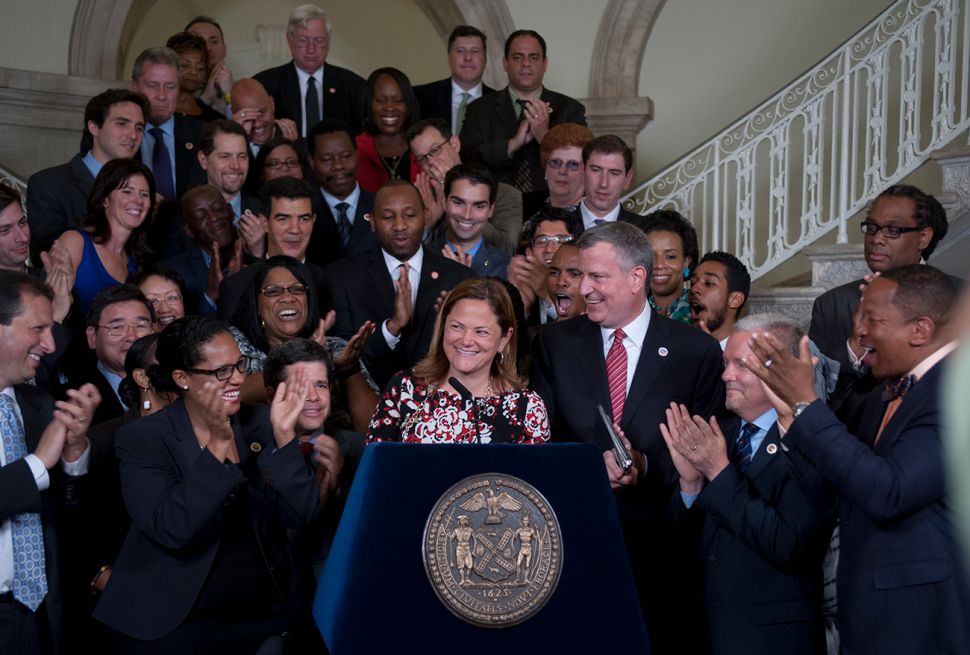