Luke Cage’s biggest leg up on Jessica Jones, its predecessor and the launchpad for its title character, is who and how it cast. Though it emerged as the most acclaimed of the 2010s’ superhero TV shows, Jessica dumbed down and flattened out its lead as she was portrayed in the comics by writer Brian Michael Bendis and artist Michael Gaydos, turning her from a good-hearted but self-destructive and entertainingly profane fuckup into a one-dimensional, glowering, sarcasm-spewing, hard-drinking, hardboiled-detective stereotype. This gave talented actor Krysten Ritter little to do but shoot people dirty looks in the same outfit for 13 episodes. The less said about David Tennant’s hambone turn as Killgrave, her telepathic abuser and nemesis, the better, as his scenery-chewing, mustache-twiddling performance did a tremendous disservice to the serious issues of rape and trauma the show attempted to address. (That attempt got it a lot of credit, more than the execution deserved). Carrie-Anne Moss and Robin Weigert were involved in a love-gone-horribly-bad storyline that had some bite to it at first, until the plot required Moss’s character to free a maniac in order to get a more favorable divorce settlement, a logical low point for the series (which is saying something). Everyone else in Jessica’s cast had the bland competence and attractiveness of cast members added to a CW show in its third season.

Cage, by contrast, boasts Jessica’s standout guest star Mike Colter as the title character (originally created by Archie Goodwin and John Romita Sr.), a wrongfully convicted ex-con granted bulletproof skin and super strength in an prison experiment, but who’s now trying to live low as he hides from his enemies and continues to mourn his late wife. Colter was the liveliest, most magnetic presence on Jessica Jones (at least until Rosario Dawson showed up in the final episode); here he’s given the spotlight all on his own, and he absolutely shines in it. It’s not just that he’s a convincing street-level superhero a la Charlie Cox’s Daredevil or Jon Bernthal’s Punisher, or that he’s equally adroit at conveying Luke’s sense of squandered opportunities and paycheck-to-paycheck struggling — it’s that this show requires him to be a romantic lead, in a big way. Despite Ritter’s humdrum performance, his romance with Jones generated a whole lot of heat. In this episode alone, whether he’s gently rebuffing the advances of a law student whose son gets his hair cut at the barber shop where he works or flirting and, eventually, fucking as-yet unnamed cop Misty Knight (Simone Missick, every bit his physical and chemical equal), he makes Luke seem as effortlessly charming as James Bond, finding a way to make each of his flirtations feel plausible and irresistible for both parties. Only a handful of actors in a generation have the blend of good looks, good-natured warmth, and genuine physical danger that such a part requires to really work. As one of the barbershop regulars puts it, “You either got it or you don’t.” Colter’s got it.

The actors surrounding sparkle as well. Missick we’ve already mentioned, though let’s do it again: As Misty, her sex scene with Luke is super hot, with (just for example) the two of them paying attention to each other’s statuesque chests in a fashion usually not seen outside your browser’s incognito function, but she goes right from bed to the scene of a multiple homicide without letting anything slip to either Luke or her partner (familiar face Frank Whaley). It’s refreshing to see a genre story treat sex, even good sex, as something that doesn’t shatter the earth, but simply gets folded back in its box and put away amid the usual routine.

Luke’s enemies-to-be are engaging as well. Foremost among them is Cornell “Cottonmouth” Stokes (Mahershala Ali), the tall, charming, wealthy owner of a swanky nightclub (featuring an extensive performance by R&B legend Raphael Saadiq!) where Luke moonlights — and a major ganglord and gun-runner. Cottonmouth, who hates the name yet is referred to as such by every character almost compulsively, has a killer smile, a talent for the keyboards, and an amazing interior decorator; the porthole window giving us a view of his portrait of a crowned Biggie Smalls is exquisite. But he also beats a man to death with his bare hands, so quickly and brutally (albeit slightly off-camera) that you have to wonder if there’s more to him than meets even the eyes of his criminal associates. This is a the kind of criminal we’ve seen before, certainly — there’s nothing as striking or risky going on here as Vincent D’Onofrio’s pressure-cooker turn as Wilson Fisk in Daredevil — but Ali handles it well, aided by the script placing him a bit behind the eightball in terms of things going wrong with his plans from the start. He’s on a mission to fix what’s gone wrong (from his own perspective, anyway) just as surely as Luke is, and that should help round out his character.

Cottonmouth’s cousin and co-conspirator, City Councilwoman Mariah Dillard, is played by none other than Alfre Woodard, who’s been so good in so much for so long I hardly know where to begin. She’s the legit face of his empire, using her “New Harlem Renaissance” to pay lip service to the neighborhood’s cultural, intellectual, and political heritage even as she funnels political funds and gun money back and forth in some neoliberal boondoggle designed to fatten her own pockets with a construction project called, with breathtaking cynicism, the Crispus Attucks Center. Watching her bodyguard squirt hand sanitizer into her palms so she can disgustedly cleanse herself of the adorable kids she’d been palling around with for a photo-op just seconds before is more chilling than watching her cousin get his own hands covered in blood.

Memorable character actors pop up throughout the proceedings. The barbershop where Luke works is owned by an older, wiser, mellower ex-con named Pops, played by the great Frankie Faison (The Wire’s Erv Burrell). Faison’s fellow Wire alum S. Robert Morgan, who played the blind mentor of rogue gunslinger Omar Little, appears in a smaller role as a newsstand owner and friend of Luke’s. Ron Cephas Jones, aka Mr. Robot’s Romero, is the witticism-dispensing, chess-playing barbershop regular mentioned above. Put it all together and you’re looking at a cast much more in line with the top-to-bottom talent of Daredevil than far more hit-or-miss Jessica Jones.

Whether they’ll get as much to do as the Daredevil crew remains to be seen, of course. One episode is awfully early to judge a show, especially given the arguably unnecessary 13-episode length of Marvel’s Netflix superhero seasons. But the signs are promising, for sure. Certainly the city assembled by showrunner Cheo Hodari Coker, a former hip-hop journalist, is far more immersive than the noir-by-numbers New York patched together by Melissa Rosenberg for JJ; there’s a scene of Luke and Misty on a corner deciding what to do with their night illuminated by the smeary lights of passing cars reflected in store windows that’s absolutely beautiful and rooted in sights a real city has to offer. The Chinese restaurant above which Luke lives is given the cutesy moniker Genghis Connie’s, however, so you win some, you lose some.

But even in that situation, the restaurant becomes the scene of a tightly choreographed, laugh-out-loud funny fight scene in which Cottonmouth and Mariah’s goons try and fail to take Luke out in a shakedown racket against the owners, displaying the come-at-me-bro fighting style this unbreakable man naturally developed. Daredevil boasted the best fight choreography of any live-action superhero adaptation in history, so Luke’s got a tough act to follow, but this bodes well. The whole thing does, really. 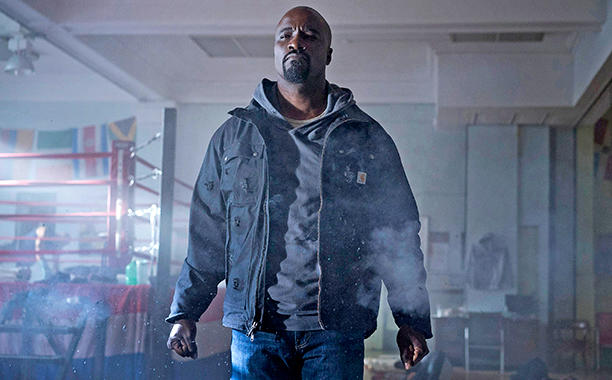