Congresswoman Carolyn Maloney praised the quick work of elected officials and city agencies following an explosion in the Chelsea neighborhood on Saturday night that injured 29 people.

The bomb was detonated on 23rd Street near Sixth Avenue and a second device, made from a pressure cooker, was found nearby on 27th Street and is currently being studied by the NYPD’s bomb squad.

Ahead of a press conference between the mayor and Commissioner O’Neill this afternoon, NYPD officials put up wanted signs for Rahami listing him as “apprehended.” The area on 23rd Street between 6th and 7th Avenues is still blocked off by the police.

Maloney, speaking in front of the Malibu Diner at 163 W. 23rd St., said she reviewed the site yesterday and that it was a “deep and strong” bomb that threw the dumpster across the street and filled it with holes, also blowing out windows on both sides of the street and glass everywhere.

The FBI, she said, had identified “every shred of evidence and they will be reporting back.” Gov. Andrew Cuomo has also added more than 1,000 police personnel and National Guard across the state in open places.

“All of this has happened in less than 48 hours and every single resident on this block has been surveyed by the Office of Emergency Management and by the police department to make sure that their needs are being met,” Maloney said.

She also said that she spent yesterday talking and working with Emergency Management Commissioner Joseph Esposito, noting that his agency set up a one-stop emergency center with the Small Business Administration to help people with their needs.

The NYPD is providing escort services for people coming in and out of the crime zone and the Red Cross has been onsite taking care of people, providing food to more than 180 residents at the home for the blind at the Malibu Diner.

Maloney said the circumstances were unusual given that “no organization has claimed credit for this crime” and that “it went off in an area that was a quiet neighborhood and no one was several hurt” as opposed to a more iconic site such as Times Square.

“While this has been an absolute, horrible ordeal, I can tell you that I have never been more proud to be a New Yorker, the way the city came together so united and determined to help people to find the criminals to take the steps to prevent another such attack taking place,” Maloney continued.

This morning, Mayor Bill de Blasio and the Federal Bureau of Investigation announced that they had started a manhunt for Ahmad Khan Rahami, a suspect in the exposition in the Chelsea neighborhood Saturday night that injured 29 people.

State Senator Brad Holyman praised the work of the officers who caught the suspect and urged people to “recognize the heroes and heroines who lived right here on 23rd Street.”

“It is a despicable act that an explosive device was placed right in front of a home for folks with vision loss,” Holyman said. “But it is a wonderful thing that we have responded with such resilience, such courage, such fortitude, as you’ve seen.”

Barbara Police, a resident of a home for the blind in front of which the explosion took place, who also worked for the late Congresswoman Bella Abzug, said she heard a “boom” around 8:30 p.m., calling that night “terrifying.”

A representative for the Office of Emergency Management; Josh Lockwood, CEO of Red Cross for the Greater New York Region; Maria Diaz, executive director of the Greenwich Village Chelsea Chamber of Commerce; and the owners of Malibu Diner also spoke at the press conference. 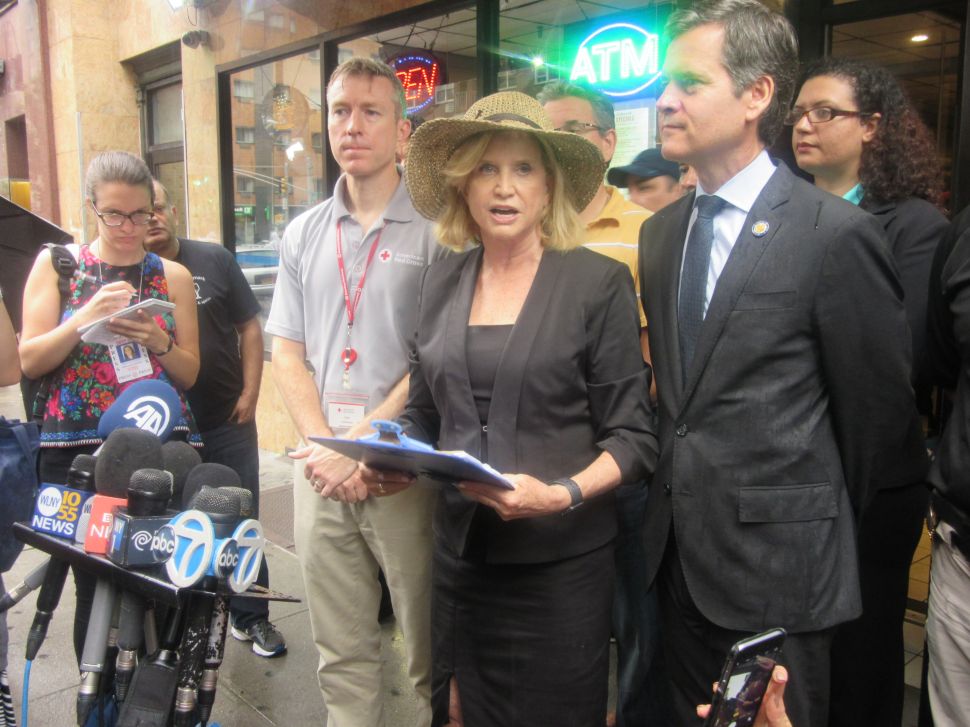