Even if you don’t know Mara Wilson by name, those who grew up in the ‘90s are all but guaranteed to recognize her face. About two decades ago, the former child actress starred in a string of standout roles: Robin Williams’ pouty youngest daughter in Mrs. Doubtfire (1993), a staunch Santa believer in the remake of Miracle on 34th Street (1994), and a precocious telekinetic in Matilda (1996), among other spots on Melrose Place and a few made-for-TV movies (1997’s A Simple Wish with Martin Short). Her more visible films, which also featured big names like Danny DeVito and Sally Field, catapulted Wilson to child-actor fame.

Her follow-up roles, with the exception of 2000’s family-friendly comedy Thomas and the Magic Railroad, are scant. As is the case with many young performers, Wilson struggled with how best to transition out of her childhood, often finding that, in auditions, her adolescent appearance just didn’t meet Hollywood’s rigid beauty standards. It’s a process she details in her upcoming memoir, Where Am I Now?, which expertly showcases the now-29-year-old’s wry wit and acerbic humor, not to mention, of course, where she is now.

Today, Wilson works as a prolific comedienne, storyteller, writer, and occasional actress (she hosts a live variety show about fears and anxieties called What Are You Afraid Of? and made a memorable Mrs. Doubtfire-spoofing cameo on the last season of Broad City). Her droll Twitter presence, too, is nothing if not formidable — to date, she has collected more than 300K followers. It’s probably safe to say that Wilson has officially rejoined the world of entertainment — but on her terms.

Below, Wilson expands on her first book (out now via Penguin), Hollywood’s myriad gender issues, how pop music and show choir inspired her love of performing, and why she’s determined to tell her own story.


What made you decide that this was the right time to write a memoir?

“I’ve been trying to explain myself to people for as long as I can remember. That’s the way that my internal monologue has been for a very long time — people asking me questions about things and me having to explain it to them, in a dialogue. This is something that I had always wanted to write.” – Mara Wilson

I’ve been trying to explain myself to people for as long as I can remember. That’s the way that my internal monologue has been for a very long time — people asking me questions about things and me having to explain it to them, in a dialogue. This is something that I had always wanted to write.

In college, I wrote a one-woman show called Weren’t You That Girl? It felt very good to be in control of my life and my narrative and tell my story my own way. Storytelling is really at the heart of everything I do. I know storytelling has become a buzzword. But literally, standing up and telling stories when I was a child was all I wanted to do. I just wanted to make up stories and perform them for people, or tell people stories of what had happened in my life that day. I do tend to do too many things at once, so for a while I was thinking, maybe I’ll write a young-adult book, maybe I’ll write a graphic novel, maybe I’ll focus on playwriting. I feel very lucky in that I really just like writing.

So, for a few years, I tried to figure out who was interested in what. It turns out that there was a lot of interest in people hearing about my life. I was like, “Great! I like talking about myself, and it would be fun to be able to tell people these things and answer the questions that they’ve been having.” The thing is, when you’ve lived a live sort of in the public eye, a lot happens between those IMDB entries, you know?

Yeah, if you’re going off of IMDB alone, viewers might be left wondering why you stopped acting after Thomas and the Magic Railroad in 2000.

I wished I’d gone out with a bang. I wish that I had done something really majorly artistic. I had a lot of fun making Thomas, and this was just kind of the way that it went. Thomas, I’ve learned from having been on the Internet, has a really big cult following. There are a lot of really big fans who are like, “I loved you so much in Thomas when I was a little kid!” So that’s really cool. I think that when you fade away the way that I did, people are going to make up stories about you. I wanted to be able to tell my own story.

You spend some time in the book discussing how, as a teenager, you considered auditioning for some more “adult” roles. But ultimately you didn’t pursue any of them. Why do you think that is?

“I think a lot of child actors assume that what it is to be an adult — if you are a woman — means you are over-sexualized…I think that a lot of young women believe that it is the only thing they can do, when it really isn’t. It’s one of many reasons why child stars fail.” – Mara Wilson

There are limited choices. I think a lot of child actors assume that what it is to be an adult — if you are a woman — means you are over-sexualized. If you are a man, you are engaging in violence in some way. That’s what Hollywood would do for so long, just boil down into these stereotypes of what it was. I think a lot of young women look at this and say, “Oh, I have to be sexual.” I don’t have a problem with women being sexual if that’s their choice, and they have other opportunities. If they want to be sexy, they can be sexy. I think that a lot of young women believe that it is the only thing they can do, when it really isn’t. It’s one of many reasons why child stars fail.

You also discuss, as an older teen, feeling as though you didn’t fit into Hollywood’s beauty standards. Do you feel like Hollywood has adjusted its standards to be more realistic in the time since?

I think we’re realizing that there are different body types, different ways to be. It’s really great that we get to see actresses like Lupita Nyong’o out there, that we get to see Laverne Cox, even on some level that we get to see Jewish women on shows like Broad City. And full disclosure, I went to college with Rachel Bloom from Crazy Ex-Girlfriend. She’s fantastic. People deserve to see people that look like them.

Something that does scare me a little bit is that I think there’s a lot of really interesting stuff happening with fandom right now. I think that fandoms are amazing, but it really makes me sad when I see fans attacking people that they perceive as not right, as not what they envisioned.

Yeah, like that! That’s the perfect example of people [sticking to] a standard. I think people really need to realize that there is definitely a tendency to put your idol on a pedestal. If you put people up on a pedestal, they are going to upset you. When people ask me, “Who’s your idol? Who’s your role model?” I don’t really have one. There are a lot of people who I really admire, whose work I really love. And yeah, it’s really cool that I get to talk to Lin-Manuel Miranda on Twitter, but at the end of the day, he’s just a dude who wants to be with his family and live his life.

When people who were my fans met me at summer camp or something, they were usually pretty disappointed because I didn’t live this glamorous life, I was really just kind of a nerd. I think that they had the vision of me in their head of what I was supposed to be, and it didn’t meet the me that they actually knew.

I was fascinated to learn about the extracurricular activities you enjoyed as a kid, aside from acting. You spend a lot of time describing your experiences in show choir. Did you grow up a big music fan?

Yes — I have three older brothers and they all played instruments. One played drums, one played bass, one played guitar. He then taught himself every instrument except drums. That’s why I gave his daughter, who’s a baby, a drum for her birthday so they can jam together. I want her to be the next Janet Weiss [from Sleater-Kinney].

I grew up with a lot of Britpop because when my brothers were coming of age, listening to Blur and Oasis, that kind of thing. That was really big for us, the British Invasion — the second British Invasion. My mom came of age during the British Invasion in the ‘60s. We listened to the Beatles driving to the set of Matilda and back, when I was seven. Paul McCartney was my first crush.

That’s amazing. Do you recall buying your first CD?
It must have been No Doubt’s Tragic Kingdom. Though I do also remember begging my father to take me to Wherehouse at nine on a school night because I just couldn’t go another day without owning my own copy of Weezer’s Pinkerton.

How about your first concert? How old were you?
When I was 12 or 13, my brother took me to see Weezer. But I had also seen No Doubt perform at a Tommy Hilfiger benefit when I was ten, and I briefly got to meet Gwen Stefani. In 1997, that was pretty much all a Southern California girl could ask for.

It sounds like you were a huge pop music fan.
I love pop. Not necessarily Top 40, but I like upbeat music. I also really, really love Motown and soul music, girl groups especially. Like TLC and En Vogue, and Salt N Pepa, which is different, more hip-hop. ‘50s girl groups like Martha and the Vandellas, The Ronettes, The Marvelettes.

I think Prince was incredible. T. Rex and David Bowie, as well. I’ve always loved glam rock because I love spectacle. I also love that it was such a warm, welcoming environment for queer people at that time, too. I think it’s how I found my place in show choir, because it was so performative and so ridiculous and over-the-top.

The truth is, for most of my life, what my mom listened to and what my brothers listened to defined my taste in music. My mom was big into show tunes. Oh, it’s really embarrassing, but I am a musical theater nerd at heart. I really am. I am a helplessly pragmatic person, but, as I’ve said, I love spectacle, I really do. The thing about musical theater is that everyone always says what they’re feeling. Everybody always tells the truth. You can’t lie in musical theater. 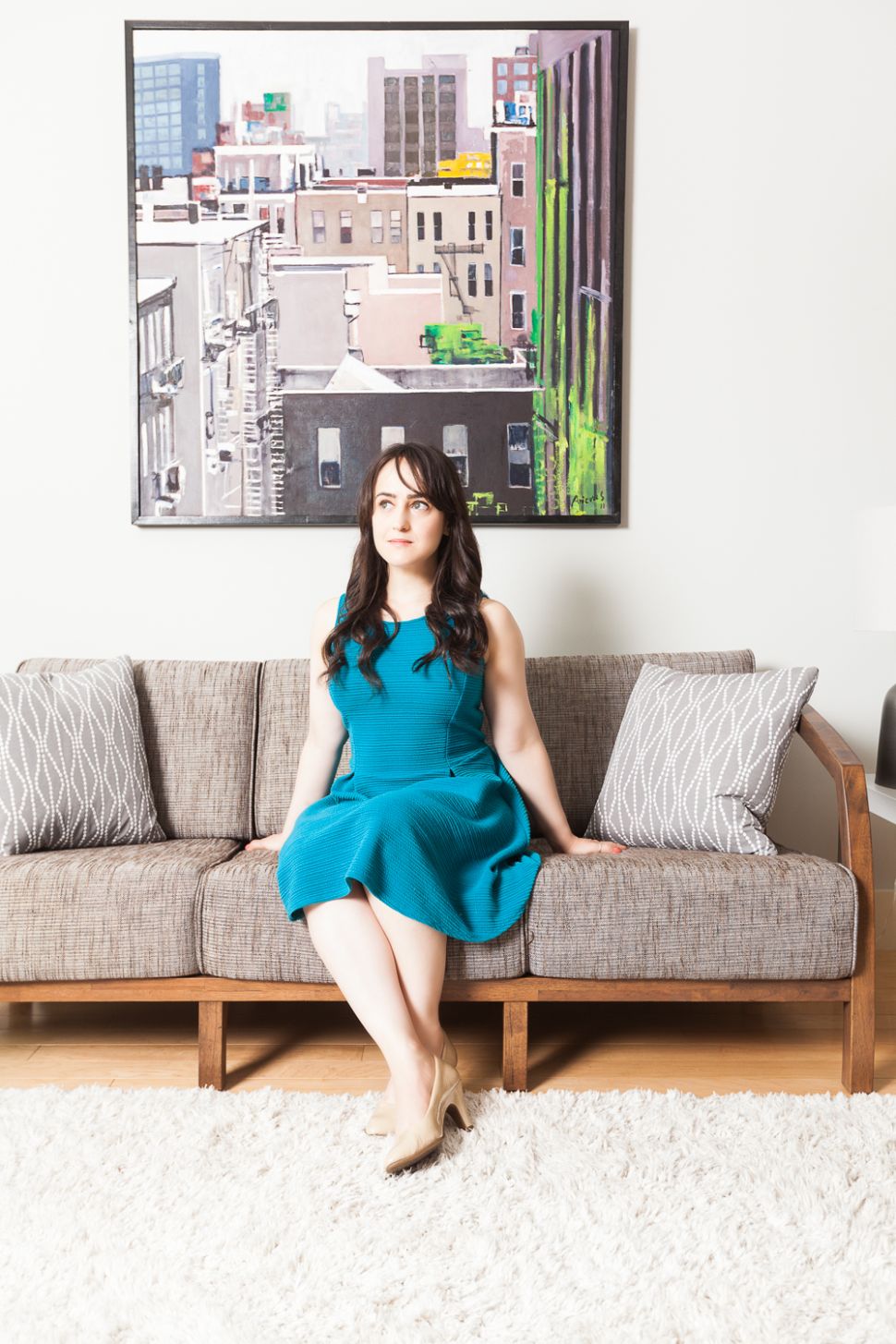