When we last saw the agents, they had defeated the villainous Inhuman Hive by blasting him into space, Skye/Daisy was a wanted fugitive, and Dr. Radcliffe was uploading some files titled “L.M.D.” So four months later do we get answers to all of these questions? We do! But unfortunately the fourth season premiere episode “The Ghost” introduces a whole new bag of questions.

If you’ve watched any commercial or seen any ad for the new season of Marvel’s Agents of S.H.I.E.L.D, you would know that the big news for this season is the introduction of the Marvel superhero Ghost Rider. And it doesn’t disappoint.  Right from the start we open on a car chase and some incredibly sexually charged clips of Daisy getting dressed in case your testosterone wasn’t pumping enough. Daisy has some fat stacks of cash lying around, she’s popping pills and wearing heavy eye make-up because nothing says renegade like extra eye shadow. She tries to stop a gang of criminals shooting up the streets only to find they are running from someone else – OR SOMETHING ELSE *Cue scary music*

Now for those not too familiar with the character, Ghost Rider was a comic written in 1972 by Gary Friedrich and Roy Thomas and illustrated by Mike Ploog for Marvel Comics. It was about a motorcycle stuntman named Johnny Blaze who sold his soul to the Marvel Universe equivalent of Satan and became possessed by the Spirit of Vengeance. Several different characters have used the title “Ghost Rider” in the comics but Agents of S.H.I.E.L.D wants you to forget about the one played by Nicolas Cage and only think about the latest incarnation, Robbie Reyes. Felipe Smith and Tradd Moore created Robbie Reyes in 2014 and their iteration still features a lot of the same traits as the other Ghost Riders but instead of his classic motorcycle, this version (played by Gabriel Luna) drives a black muscle car that we see in a near-perfect depiction on screen.

Ghost Rider’s entrance is a slap in the face in a good way. There is fire coming from his car, there is fire on the streets, we don’t get a good look at him but we can see the fire coming from his head. You can tell they’ve already had a meeting about how much fire CGI they will need for this season. We don’t see Ghost Rider actually kill the gang, but we hear a lot of bone crunching, see a lot of blood spatter and it’s just as equally effective. Agents of S.H.I.E.L.D. is definitely darker this season, and it might be to keep up with the Marvel Netfilx shows like Daredevil and Jessica Jones. I half expected Jon Bernthal’s The Punisher to walk out of the car.

As for the rest of the team, Mack and Coulson have been flying place to place together as agents. They mention the Sokovia Accords from Captain America: Civil War over a game of backgammon just to keep the shared universe alive. Later on we do hear that Inhumans are also signed under the agreement. They are then called back to base by May who we see is still the toughest character on the show as she trains new recruits. S.H.I.E.L.D is back to normal now and there is no more operating out of the shadows, and we get to see a bustling base to prove that. May calls them back to pass on information about a possible Daisy sighting as the hunt for her has continued since the season three finale. Not only that, but if the Skye/Daisy name change wasn’t complicated enough, she is now being called, “Quake,” too (which is what her hero name is in the comics).

Fitz and Simmons are still together however Jemma has been promoted and is now assisting the new S.H.I.E.L.D Director.  We don’t get a name or even see the new Director this episode and the show really likes to point out that Coulson isn’t the acting Director in the dialogue. Although Simmons and Fitz are still together, they do mention that they don’t see each other or even the rest of the team much anymore. They do provide Mack and Coulson with some new gear in a very James Bond-esq scene complete with an exploding pen. Even Yo-Yo shows up which is great because her and Mack’s relationship last season was one of the highlights. Henry Simmons plays a great straight man and anytime we get to see him crack under pressure – especially sexual tension – is a treat.

As for those mysterious L.M.D. files from last season that Holden Radcliffe was working on, we get to see what has become of them. Or more specifically, Fitz gets to see them as he finds a naked robot in Radcliffe’s home. Awkwardness aside, Radcliffe reveals he’s been working on creating a humanoid robot after seeing the technology in Coulson’s hand. One would think this would be a bad idea even after a movie was made about what happens when you create artificial intelligence (Ultron) but they clarify that the robot is meant to mimic and not think for itself.  In the comics, L.M.D stands for Life Model Decoy and are robotic clones that are sent into the field to help human agents avoid putting themselves at risk. Ana (the L.M.D.) even mentions the term decoy. Fitz and Radcliffe agree to keep this a secret from the rest of S.H.E.L.D. until the design is perfect because keeping a secret at the start of a season always ends well.

Skye/Daisy/Quake is still on the hunt for the mysterious Ghost Rider who she only believes is a serial killer. She visits one of the injured gang members at the hospital only to be left with the threatening line that the mysterious flaming-skulled man doesn’t just burn your body, but burns your soul. Daisy is also working with Yo-Yo to get the pills we saw at the beginning of the episode to help her heal her bones since her powers are causing them to break. She manages to track down Ghost Rider’s car and finds Robbie Reyes who tries to take her down. They begin to fight and we finally get to see a good look at Ghost Rider. Tradd Moore’s original art for this version of Ghost Rider is heavily influenced by anime but I think Agents of S.H.I.E.L.D. has captured the look well and I can’t wait to see more. The battle ends with Daisy begging Ghost Rider to kill her and that she deserves it, and just like the audience, he too is sick of hearing her say that and walks away. Even the Spirit of Vengeance thinks she should cut it out.

Lastly, the S.H.I.E.L.D. agents are a few steps behind tracking Daisy and Ghost Rider really isn’t even on their radar. They are following some trucks in hopes that will be where Daisy is going. May is under pressure from Jemma who is acting under orders of the new Director to stop Coulson and Mack from pursuing Daisy and she admits she has to follow orders to keep the trust of the new Director and maintain a sense of control for everyone’s sake. The trucks are delivering a weapon for the gang and we get a glimpse that the weapon is some spooky, mysterious ghost lady that causes the leader of the gang to see everyone around him as demons and his fear causes him to kill everyone. Luckily May brings in the backup and they take them all out and take control of the situation but not before seeing the ghost lady fly into May.

The episode ends with the L.M.D. shutting down almost ominously (very possible something will go wrong with that). Daisy spying on Robbie Reyes and discovering he takes care of his younger, disabled brother evoking a little sympathy and humanizing the character. And May sees Coulson as a demon for a split second just like the gang members did before they went crazy (something definitely will go wrong with that). What will happen next week? Will Jemma discover Fitz is lying? Is Ghost Rider going to realize he’s just angry he can’t wear hats? Will Skye/Daisy/Quake get another name? Stay tuned, true believers! 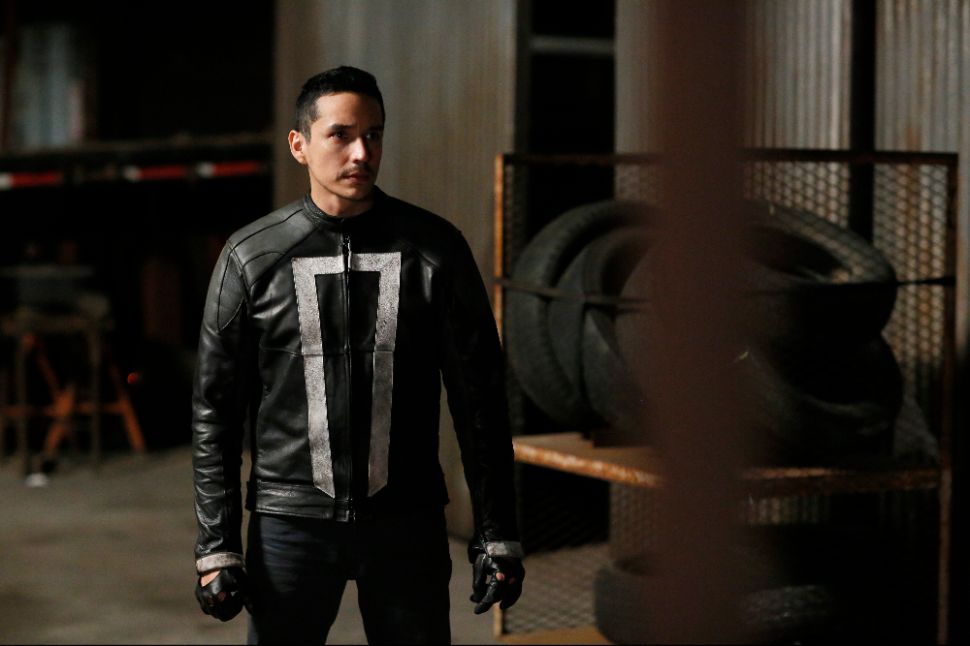