It is impossible to tell from the CNN.com, NBCNews.com and ABCNews.com and New York Times fact check items on Trump’s exchange with moderator Lester Holt that he singled out key Hillary advisor Sidney Blumenthal for peddling the rumor to a Washington reporter in 2008.

Holt asked Trump what “took you so long” to finally acknowledge Barack Obama was born in the United States.

Trump replied, “I’ll tell you very — well, just very simple to say. Sidney Blumenthal works for the campaign and a close, very close friend of Secretary Clinton. And her campaign manager, Patti Doyle, went to — during the campaign, her campaign against President Obama, fought very hard. And you can go look it up, and you can check it out.

“And if you look at CNN this past week, Patti Solis Doyle was on Wolf Blitzer saying that this happened. Blumenthal sent McClatchy, highly respected reporter at McClatchy, to Kenya to find out about it. They were pressing it very hard. She failed to get the birth certificate. When I got involved, I didn’t fail. I got him to give the birth certificate. So I’m satisfied with it. And I’ll tell you why I’m satisfied with it.”

The ABCNews.com fact-check sounded like the spin somebody would expect from progressive truth policers Media Matters.

NBC News.com completely omitted the crucial Blumenthal reference from its fact-check item. “Trump said Clinton and her campaign started the ‘birther’ movement” but “they didn’t.”

Actually, he did not expressly say Clinton and her campaign started it; he merely noted how they allegedly pushed it. The misleading summation linked to a Politifact round-up of the issue. It noted that a Clinton campaign volunteer, later fired, circulated an email claiming Obama was born in Kenya.

But the Poltifact story completely omitted new claims by former McClatchy Washington Bureau chief James Asher that in 2008, Hillary Clinton’s top advisor Sidney Blumenthal convinced him to send a reporter to Kenya to investigate the possibility that Obama was born there.

In sum, the NBCNews.com item was an incomplete account of Trump’s own words linked to a misleading and separate fact-check of the issue in order to discredit something he didn’t really say.

The ABCNews.com fact-check sounded like the spin somebody would expect from progressive truth policers Media Matters.

Nobody “publicly” questioned it? That sounds like a deliberate attempt to write around the issue. ABC News basically refuted something Trump didn’t say. His comments at the debate made very clear Blumenthal was pushing the rumor privately—behind the scenes.

“The debate wasn’t the first time Trump has alleged Clinton spread the lie that Obama was not born in the US. But it’s still wrong. A 2008 Clinton campaign volunteer coordinator was fired after forwarding an email promoting the conspiracy theory, but the campaign itself never questioned Obama’s birthplace.”

Meanwhile, from the department of be grateful for small favors, Washington Post Fact-Checker Glenn Kessler did respond to the specifics Trump raised but proceeded to accept at face value Blumenthal’s flat-out denial that he ever peddled the story to McClatchy.

But what about James Asher’s claim that Blumenthal convinced him to investigate whether Obama was Kenyan born?

“To support the debunked notion that Clinton’s campaign originated ‘birther’ rumors during the 2008 presidential campaign, Trump pointed to these two examples. But they don’t add up to much of anything,” Kessler and co-author Michelle Ye Hee Lee insisted.

“Solis Doyle did say in a recent CNN interview that in December 2007, a volunteer coordinator in Iowa forwarded an email perpetuating the birther conspiracy,” but Hillary Clinton fired her.

But what about James Asher’s claim that Blumenthal convinced him to investigate whether Obama was Kenyan born?  “Blumenthal, declining to elaborate further, said in a statement to The Fact Checker: ‘This is false. Period. Donald Trump cannot distract from the fact that he is the one who embraced and promoted the birther lie, and bears the responsibility for it.’”

Shouldn’t this flat-out denial from Blumenthal have merited more skepticism given his history of trash-talking anybody who threatens the power and prestige of Bill and Hillary?  In 1999, Blumenthal denied under oath that he had told reporters on background that Monica Lewinsky was a “stalker.”

But in a sworn affidavit, the late Christopher Hitchens claimed he used that very word to him while trying to discredit Lewinsky.

The relevant facts about Sidney Blumenthal—dating back to the late 1990s—are suddenly not fit to print. Go figure. 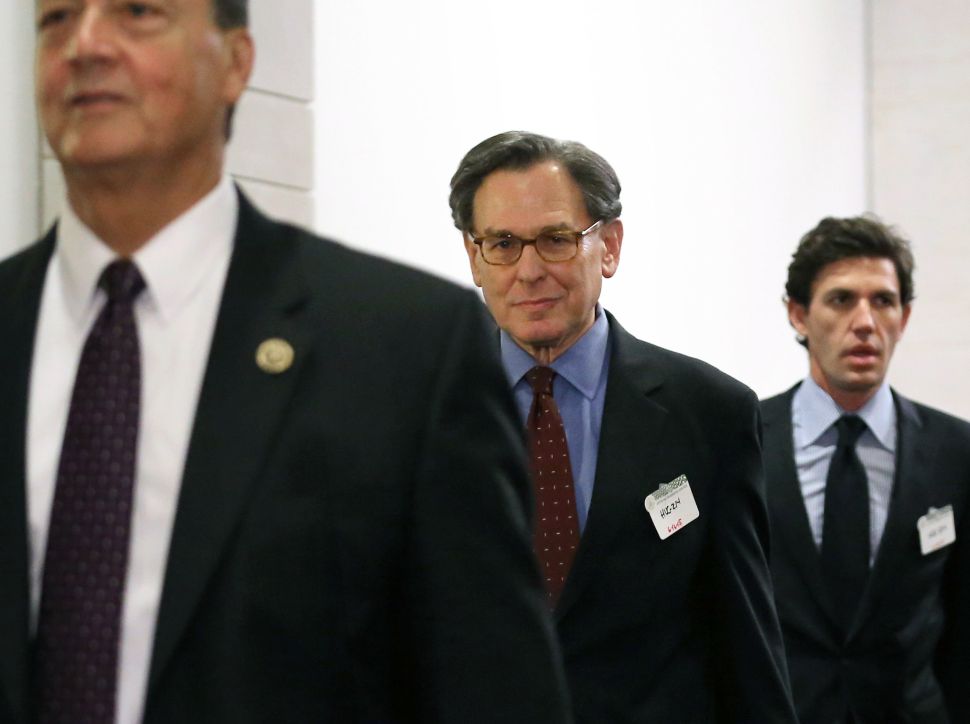