The National Advisory Committee for Aeronautics (NACA, the precursor to NASA) had a problem in 1943—most of the agency’s engineers and mathematicians (known as “human computers”) were fighting in World War II, leading to a shortage of manpower.

So like many organizations inspired by Rosie the Riveter, NACA began recruiting and accepting female applicants—and this outreach continued after the war ended and the agency’s focus shifted to space. Over 1,000 women were part of the NACA/NASA human computer program between 1943 and 1980, including 80 African Americans.

Writer Margot Lee Shetterly grew up in Hampton, Virginia, and her father was a climate scientist at NASA’s Langley Memorial Aeronautical Laboratory in town—the human computers also worked there, so she grew up knowing their story.

But when Shetterly and her husband visited Hampton several years ago, and her husband heard the story of NASA’s black female workforce for the first time, he was stunned because he knew nothing about it.

“I took the history for granted, but it was a lightning bolt to see it from another point of view,” Shetterly told the Observer.

She parleyed this “lightning bolt” into the new book Hidden Figures, which explores how Langley’s black female mathematicians helped America win the Space Race. As part of her research, Shetterly interviewed 15 former female human computers (who were all in their 70s, 80s and 90s) and spoke to family members of another 20 women. She also utilized NASA’s archived oral histories, and combed through employee newsletters and newspaper clippings.

“A lot of the lives had to be recollected through fragments,” Shetterly said. “But once I started there was unquenchable curiosity. It took on a very organic life of its own.”

“These women were let loose in this new field…The men saw the computer work as tedious, but the women saw an opportunity to prove themselves.” – Author Margot Lee Shetterly

The human computers helped manufacture bomber aircraft during World War II, and they also assisted in the development of the Bell X-1 plane that Chuck Yeager used to break the sound barrier in 1947

Their work gained even more importance, however, when Russia launched the Sputnik satellite in 1957, marking the beginning of the Space Race. To reflect the agency’s new emphasis on space travel, NACA became NASA in 1958.

The Langley mathematicians built tracking stations that allowed for two-way communication between spacecraft and Mission Control, and calibrated some of NASA’s most famous early flights, including those of Alan Shepard (who in 1961 was the first American in space) and John Glenn (who became the first American to orbit the Earth in 1962). They also worked on the 1969 moon landing and took part in the Apollo 13 rescue mission.

Shetterly’s book focuses mostly on women who spent their entire working lives at NASA, because she said “it provided a good narrative arc to see the course of a woman’s career over decades.”

Among the black NASA pioneers profiled in Hidden Figures are:

“These women were let loose in this new field,” Shetterly said. “They took it very seriously, and they loved their job. The men saw the computer work as tedious, but the women saw an opportunity to prove themselves.”

The human computers will soon be proving themselves on the big screen as well—Oscar-winning producer Donna Gigliotti, president of development, financing and production company Levantine Films, commissioned a script based on Shetterly’s story in 2014 (while she was still writing the book) and Fox 2000 will release the movie adaptation (also called Hidden Figures) in January. The film’s all-star cast includes Taraji P. Henson, Janelle Monae, Octavia Spencer, Kevin Costner, Kirsten Dunst and Jim Parsons:

“The movie’s moving at breakneck speed alongside me,” Shetterly said. “A lot of people will see that black and women’s history are part and parcel of American history. I hope people get the book for the detailed story, but let’s face it more people see movies than read books.”

Shetterly is also spreading the book’s message through the Human Computer Project, a growing online database of the women and minorities who worked at NACA/NASA during World War II and the Space Race.

“Having scientific talent was a national priority at that time,” she said. “Hopefully this will give us some lessons to use now to diversify the science workforce.”

Shetterly concluded that the hidden figures were an example of America at its best.

“You can’t get rid of the hard parts of history, but you also can’t forget the really exciting, wonderful parts that live up to our highest ideals,” she said. “This story is intrinsically American.” 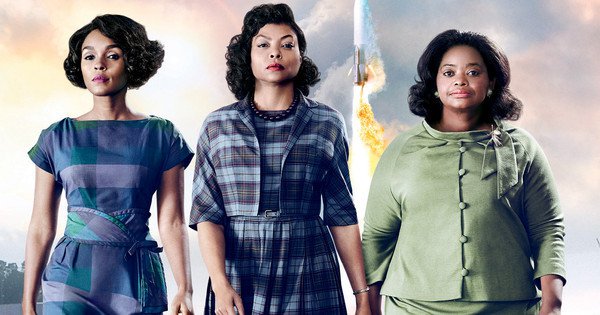