“Sooner or later, this will all catch up to you“

I’ve watched the final two minutes of last night’s Mr. Robot, “eps2.8_h1dden-pr0cess.axx”, with the same feverishness of an internet deep-web conspiracy theorist pouring over the Zapruder film, more times than I care to admit. What a brilliant, infuriating decision by Sam Esmail to keep his single, static shot of Lupe’s in SoHo at a distance, so that even as we zoom, as we squint, as we turn the damn brightness on our laptops up we still can’t quite see who Dominic DiPierro confronted after her breathless pursuit of Cisco and Darlene on the streets of New York. We also don’t know who survived a Dark Army member tearing the place to shreds with a machine gun.

It’s an almost unbearably tense sequence–an unbearably tense episode, actually, but we’ll get to that–that reveals more details with repeated viewings. The pedestrian walk signal on the corner counts down from 18, hitting zero just as the bullets start flying. The eery stillness of the second Dark Army soldier sitting on the motorcycle as his partner opens fire, and the casual way he leaves the scene. And, finally, something I can’t say for certain, but bears mentioning…I’m pretty sure there’s three people sitting at that window-side table.

If so, we’re left with two options. 1) DiPierro just missed Cisco and Darlene, and the confrontation we saw from afar was the result of coming this close to a legitimate lead in the 5/9 case. OR, 2) A previously-unseen, incredibly unlucky third party joined Cisco and Darlene. But who?

I mean, I wish I had an answer for you. But if it’s one thing Mr. Robot seems unconcerned with offering us at this point, it’s answers. In fact, “eps2.8_h1dden-pr0cess.axx”–the shortest episode of the season–was so tightly plotted and rapidly paced, Mac Quayle’s thudding, thumping score constantly rising toward a crescendo, that by the time you finally exhale it takes a while to realize that instead of answers, we’re left with roughly one million new questions. Give or take.

For one: Tyrell Wellick, and every single aspect of his existence…or lack thereof. Joanna–never played more confoundingly scary by Stephanie Corneliussen than here–recruits Elliot in finding her missing, presumed dead by Elliot and an increasingly untrustworthy Mr. Robot, husband. Tyrell’s been contacting her, she says, and by that she means he’s calling her from blocked numbers and rasping like the damn Babadook. But, as I said last week, there is something about Joanna. An unseen but undeniable power behind those arctic blue eyes. “I still feel like she can hear us,” Elliot says.

“I feel like she can see me,” Mr. Robot responds, shaken.

That’s another thing – in the search for Tyrell Wellick, we’re getting hints that Mr. Robot, who isn’t even a real person, is terrified. A call from Tyrell to Elliot that sounds like it’s coming from The Upside Down is enough to scare Mr. Robot away for the remainder of the episode. If Mr. Robot has a secret to keep, it’s a secret Elliot is keeping from himself. But what would be more devastating for Elliot’s already fragile psyche; that he murdered Tyrell, or that the missing Wellick is still alive? Or, somehow, that “Tyrell Wellick” never existed in the first place?

Again, let’s return to this week’s theme: I have no idea.

A cell phone, a real, solid working cell phone, at least, exists somewhere in New York city, whether it’s being used by Tyrell Wellick or not. It’s a genuine breath of fresh air to watch Rami Malek play a completely in-control Elliot as he impersonates an NYPD officer to ping the location of “Tyrell’s” phone: 92 East 82nd Street. Finally, a concrete answer…immediately undermined with more mystery, courtesy of Mr. Sutherland’s response: “Trust me,” he tells Elliot. “He wouldn’t be calling from that house.”

In a certain light, Esmail’s onslaught of sleights of hand and double-speak is frustrating, because right now Mr. Robot‘s entire narrative is built on a pile of question marks. But that’s kind of what you sign up for, when you clicked yes on that first message with the subject line “hello_friend.” Part of the fun behind this series is that shared experience of being left in the dark. Elliot, who can’t even keep his personalities straight, is experiencing this world as we do, with wide-eyed confusion and only the briefest hints of total control. It’s that much more worth it when this show hits you with a moment of genuine, no-bullshit human connection, the type you can’t get from a keyboard.

Case in point: This season’s first face-to-face interaction between Elliot and Angela, on an empty subway car, acted masterfully by Malek and Portia Doubleday using not much more than their eyes; Angela’s pleading and bloodshot, Elliot’s desperately searching for a way out of way more than a train car. Angela knows about FSociety, probably has for longer than she realized, and intends to go to the FBI with her involvement in the 5/9 hack. “I can’t keep pretending like this is gonna’ go away,” she says. “We will always lose to them.” It’s a conversation that feels like a farewell, and ends with a genuinely heartbreaking kiss that feels as long-awaited as it does final.

“I don’t want to leave her,” Elliot tells us, the audience in his head. But then he does. Where Elliot goes then, who he leaves Angela to confront on the train, just what the hell happens in the very next scene at Lupe’s, all of it…it’s still up in the air. But with just three episodes left, we’re clearly headed toward something. This season is counting down, slowly, like a pedestrian walk signal on a New York street corner. And when it hits zero…bullets and blood. 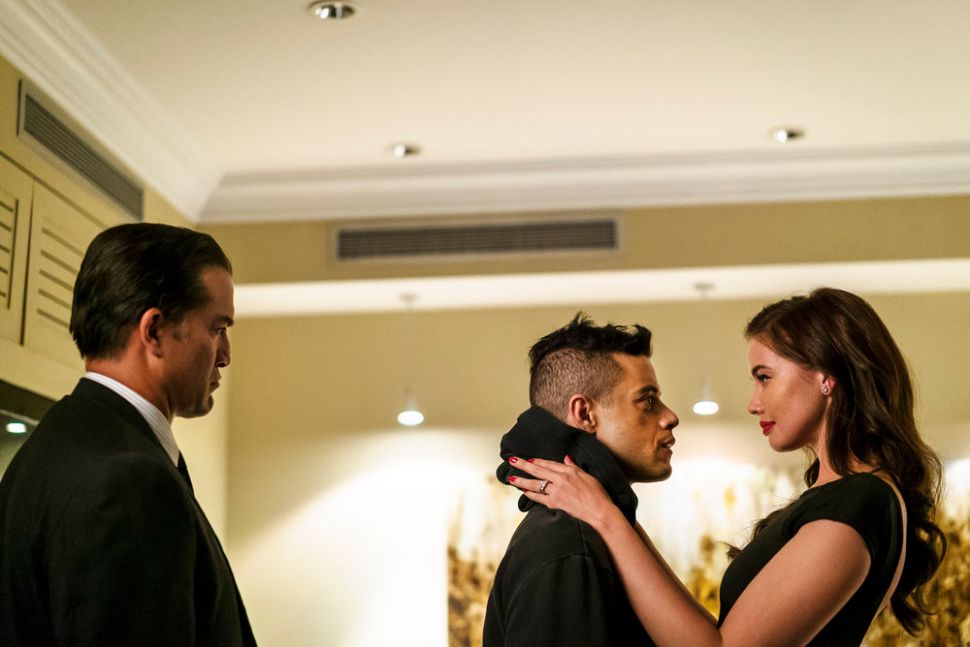