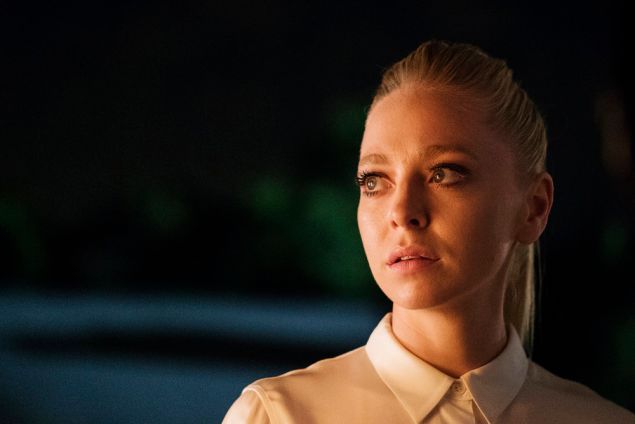 “The key was in my fist. My fist was in my pocket“

If any budding filmmakers out there want a lesson in mining high-tension from very little, listen to the way Sam Esmail uses a beeping timer. In fact, you could play the brilliantly-acted, meticulously paced conversation between Angela Moss and Whiterose toward the end of “eps2.9_pyth0n-pt1.p7z” with your eyes closed and still, like BD Wong’s “woman of time”, measure the scene down to the second. Granted, I’m not sure how this matches up on a live viewing, but on the press screener I watched this episode on here’s what I saw: The scene began at exactly the 27 minute mark and faded to black exactly at 35:00. In between, Whiterose’s signature time-keeper beeped, regardless of what was being said, every 60 seconds, eight times in all. With every beep I wondered if we were headed towards a conclusion, or away from safety, or just counting the minutes just to count because time is the only thing left in this show we can certifiably keep track of.

Eight beeps, eight minutes. But Whiterose, in a fit of generosity, allotted a full 28 minutes for this conversation. That’s 20 minutes, 20 beeps of the timer, 20 more reasons to believe what we’re seeing between Angela and Whiterose is anything more than some Lynch-ian fever dream. That’s the point, right? “I don’t want your proof,” Whiterose said, through a puff of cigarette smoke. “I want your belief.” But we don’t get those 20 minutes. We don’t get the belief that leads Angela to cut all ties with her lawyer. And that’s either the beauty or–depending on your tolerance level–the great annoyance of Mr. Robot. Elliot even spells it out for us; it’s not about what we see, but what we don’t see. It’s in the lost moments, those last 20 beeps, where all the answers lie.

Confused? Well, the episode had some advice for you: 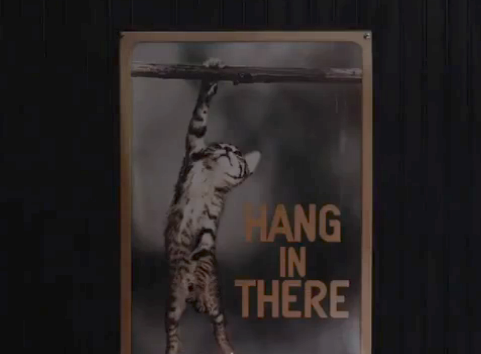 The penultimate episode of season two slowed the pace wayyyyy the hell down from last week’s literal and figurative machine gun clip, and decided instead to dial the surreal up to around Twin Peaks’ dancing dwarf levels. After her tender subway-car kiss with Elliot, Angela was abducted by the Dark Army, driven by mute captors to the tune of “The Ballad of Davey Crockett” to an unexpectedly sterile suburban home. She was led to a room lit only by a slowly-leaking fish tank, containing a single table, covered with an out-of-date computer, a red telephone, and a copy of Vladmir Nabokov’s Lolita.

And then shit got really weird.

There’s so much to hint that Angela’s Buzzfeed Quiz From the Depths of Hell wasn’t entirely real, and that’s ignoring the fact that the episode began with Elliot going to sleep. I mean, the girl conducting the questions was a dead-ringer for Portia Doubleday minus a few decades, and if anything screams “subconscious” it’s being interrogated by yourself as a child. And then there’s the questions, seemingly pulled from a late-80s-esque Choose Your Own Adventure RPG named The Land of Ecodelia.

“Have you ever cried during sex?”

“Have you ever fantasized about murdering your father?”

Are you a giraffe or a seagull?”

It’s Angela’s inability to answer that final query that leads to more strangeness; a jarring call from the red telephone, a scenario spelled out by a disguised voice, a question, repeated without fail…”The knob doesn’t turn, how do you open it?” Angela’s answer, for those not into slightly-creepy yet gorgeously-written Russian literature, is actually culled from a quote from Lolita itself: “And she was mine, she was mine, the key was in my fist, my fist was in my pocket, she was mine.”

So…what? What’s the connection? What’s the key that fits the little girl, the book, the red telephone, the fish tank and the seemingly random questions together, the string of Easter Eggs that blows this scene open or, at the very least, has it make a little sense?

There isn’t one, and that’s the point. This scene–this entire season, actually–could be boiled down to this series of unrelated questions with answers we don’t understand. For eleven straight episodes we’ve been sitting in the dark with nary a fishtank to guide our groping. But there’s meaning to it, in the end. It’s a test, and one that Angela seemingly passed, even if we don’t know exactly why. Whiterose hints that Angela is special–and she must be, seeing as how Philip Price is moving mountains to accommodate her–and has been since she was a child, since her mother died at the Washington Township Plant. “If I told you that your mother and Elliot’s father died for a reason, would it make a difference?” Whiterose asked.

And that’s it right there. Would it make a difference? Does it matter what those questions meant, or why Lolita was on the table, or even if this entire sequence was real or a dream? Couldn’t it be both? Whiterose offers an answer herself: “I suppose that depends on what your definition of real is.” 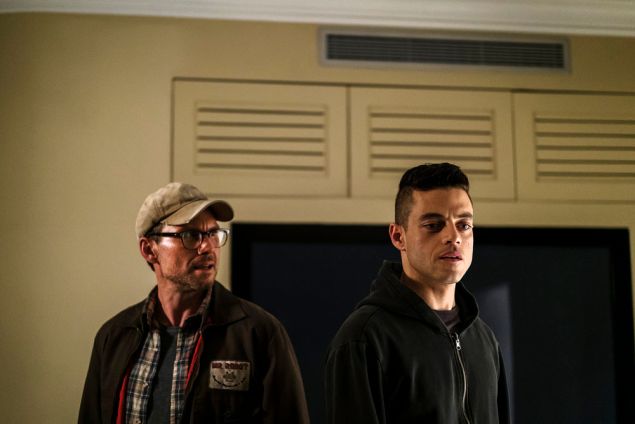 Right, so Tyrell is back, but whether or not he exists outside of Elliot’s mind is still up in the air. I actually think if you wanted to helpfully summarize this show as a whole all you would need is Elliot screaming at his cab-driver “CAN YOU SEE HIM? DID YOU HEAR THAT?” trying to confirm the man next to him is real. Kudos to Rami Malek, as always, but I actually loved what Martin Wallström did here; he played it far more bemused than angry. For Elliot, and for us, this was a plot twist. For Tyrell Wellick, this is business as usual. Judging simply by Wallström’s eyes, he’s been here the entire time.

But what’s he been up to? Besides watching Casablanca, I mean. It looks like the answer is colluding buddy-buddy style with Mr. Robot, who he sends the world’s most complicated e-vite through a Chinese food menu. I love the idea that Elliot and Mr. Robot have separated so much, Elliot Harriet the Spy-style stalks Mr. Robot through a crowded street before remembering they are literally the same person. But the weight of Wellick’s return takes a bit of a narrative hit just because, well, we still have no idea what Phase 2 is. It’s definitely bad….well, probably bad, seeing as how The Dark Army has been mass-murdering anyone that gets within arms reach of it–and it’s ready to do what Phase 2’s do. “When you see it, you’ll be pleased,” Tyrell tells Elliot, and man did I miss that crazy bastard’s slimy-ass smile.

And that’s what we’re left with heading into next week’s finale: Elliot and Tyrell Wellick strolling shoulder to shoulder, “Earth Angel” playing gently underneath. Just two, possibly three, possibly just one man headed off into the future he (they?) created. 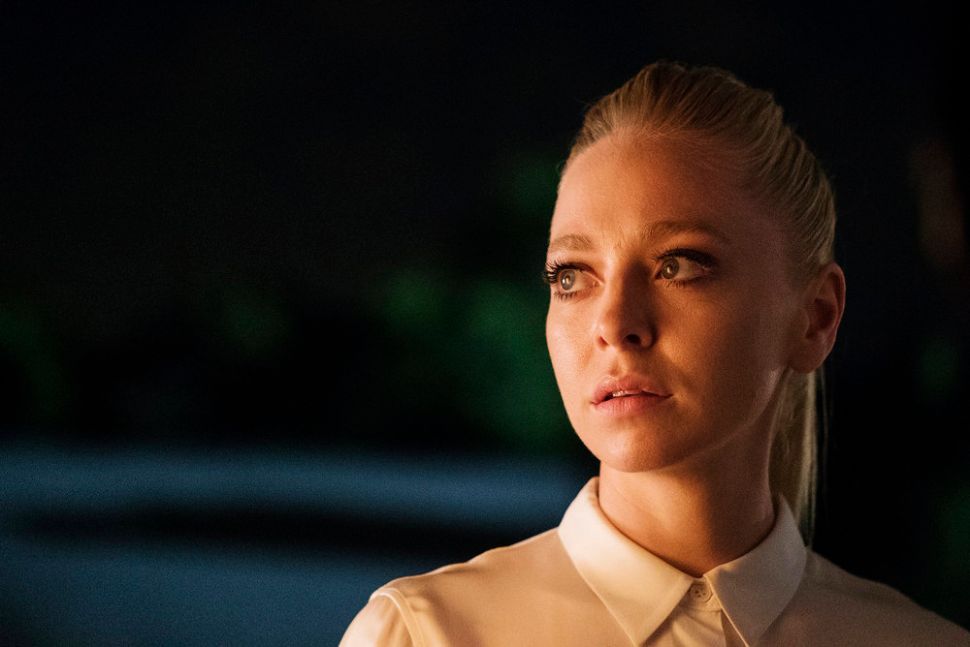