This is what 14 trips on the Staten Island Ferry looks like. Graphic by Kaitlyn Flannagan for Observer

As someone who grew up on Staten Island, I’ve taken the ferry many times. In college, I masqueraded as an adult and took the morning rush-hour boats to an internship on the Upper West Side. I took mid-day weekend boats to sightsee with friends from out of town. I took 3:30 a.m. rides I barely remember, returning from nights out “in the city,” as Staten Islanders call Manhattan.

But I’d never taken the ferry 14 times in one day. Until last Wednesday.

It started, as an alarming number of my stories do, with a half-joking tweet that came to me as I walked to my office on Whitehall Street. “The Staten Island Ferry should have a writer-in-residence program like Amtrak does,” I posted on July 14. The idea turned into an eight-hour journey to nowhere aboard four different ferryboats, as I proclaimed myself the Ferry’s Unofficial Writer-in-Residence.

Our odyssey began at 10:30 a.m., boarding the Staten Island-bound John J. Marchi. I was armed with everything a mobile journalist needs: my laptop, my iPhone, my wifi hotspot, chargers and an iced coffee and croissant I’d purchased at Aunt Butchie’s Bakery in Whitehall Terminal.

Plenty of my day on the was spent reporting, but there were also quiet moments spent doing what I normally do—drinking coffee, writing, arguing about the politics of Mayor Bill de Blasio’s gym routine on Twitter, editing stories from my colleagues. I tried every seat in the house—each outdoor deck (the side facing the Statue of Liberty is most crowded, the deck facing Manhattan has my favorite view but the loudest engine noise), the seats downstairs with commuters who don’t care about the view, spots inside near doors that let in the breeze.

This is a key problem with being a writer-in-residence on the ferry: You can’t just stay put, like you might for a long-haul train ride. Ever since the September 11 attacks, Coast Guard regulations require each boat be emptied after docking. On the upside, I got in more steps than I usually do sitting at my desk. 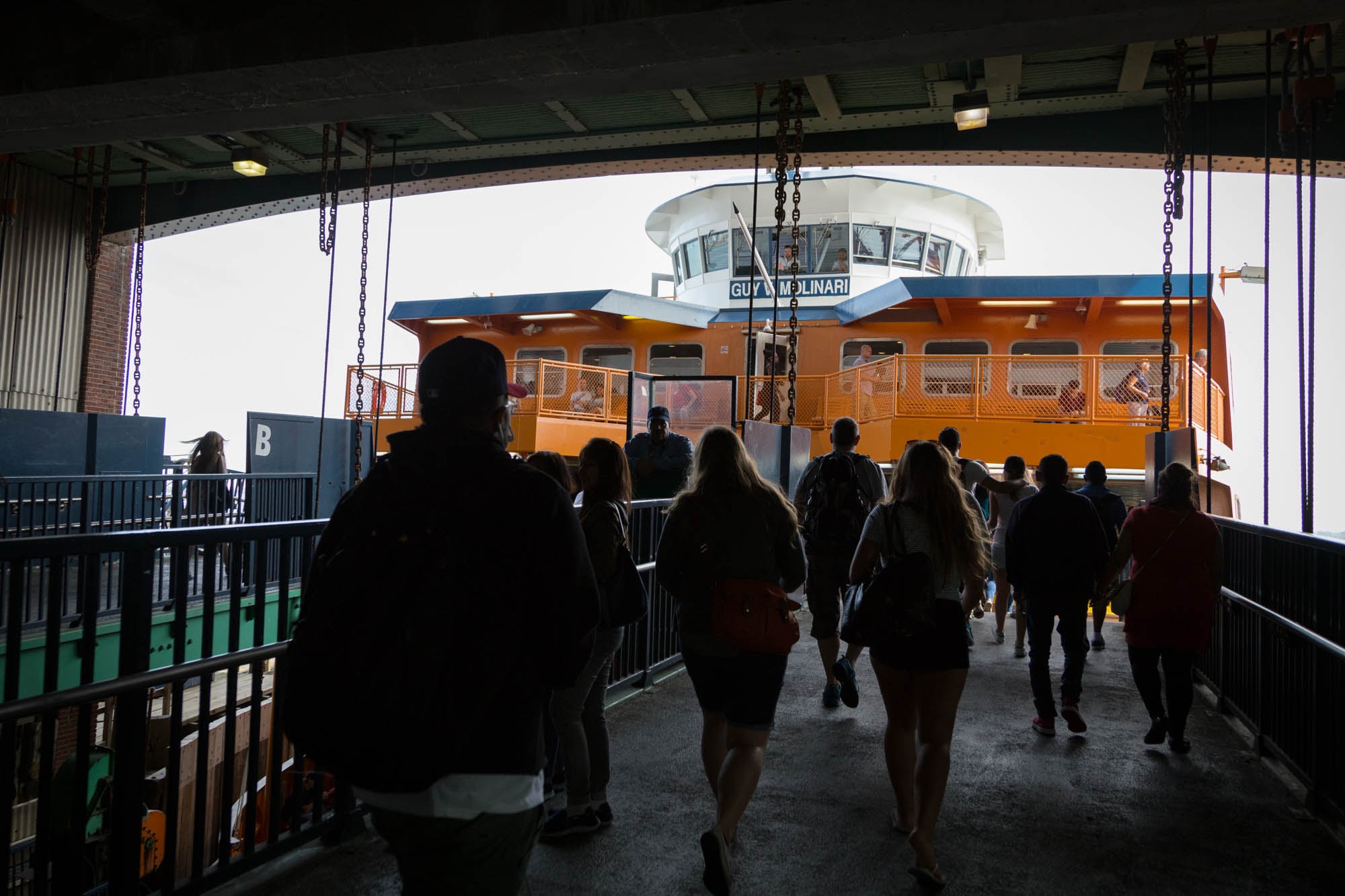 The ferryboat Guy V. Molinari, my office for much of the day. Kaitlyn Flannagan for Observer

The bulk of our trips were aboard the Guy V. Molinari, a massive vessel named for the pugnacious former congressman and borough president who, at 87, is still getting into feuds with Staten Island politicians half his age—last year in an interview he told me he’d never forgive a state senator and fellow Republican for a slight, deeming him a “lowlife.” It was the perfect place to meet up with Borough President James Oddo (who has also publicly tussled with Molinari) for a noontime interview.

Most passengers were tourists—none recognized Oddo, who happily pointed out his own public service announcement about litter among advertisements on the boat. In the mornings and evenings, the boats are full of Staten Islanders, people who see the ferry as a vital transit link rather than a free pleasure cruise. Years ago, Oddo was among them—commuting each day to New York Law School, befriending the other Islanders who commuted: “They used to call us the boat people.”

The boat seems to have edged out the Verrazano Bridge, the nation’s longest suspension span, as the most iconic image of Staten Island.

“It’s a big floating orange boat filled with characters Hollywood couldn’t write up,” Oddo said. “And that’s on every boat.” 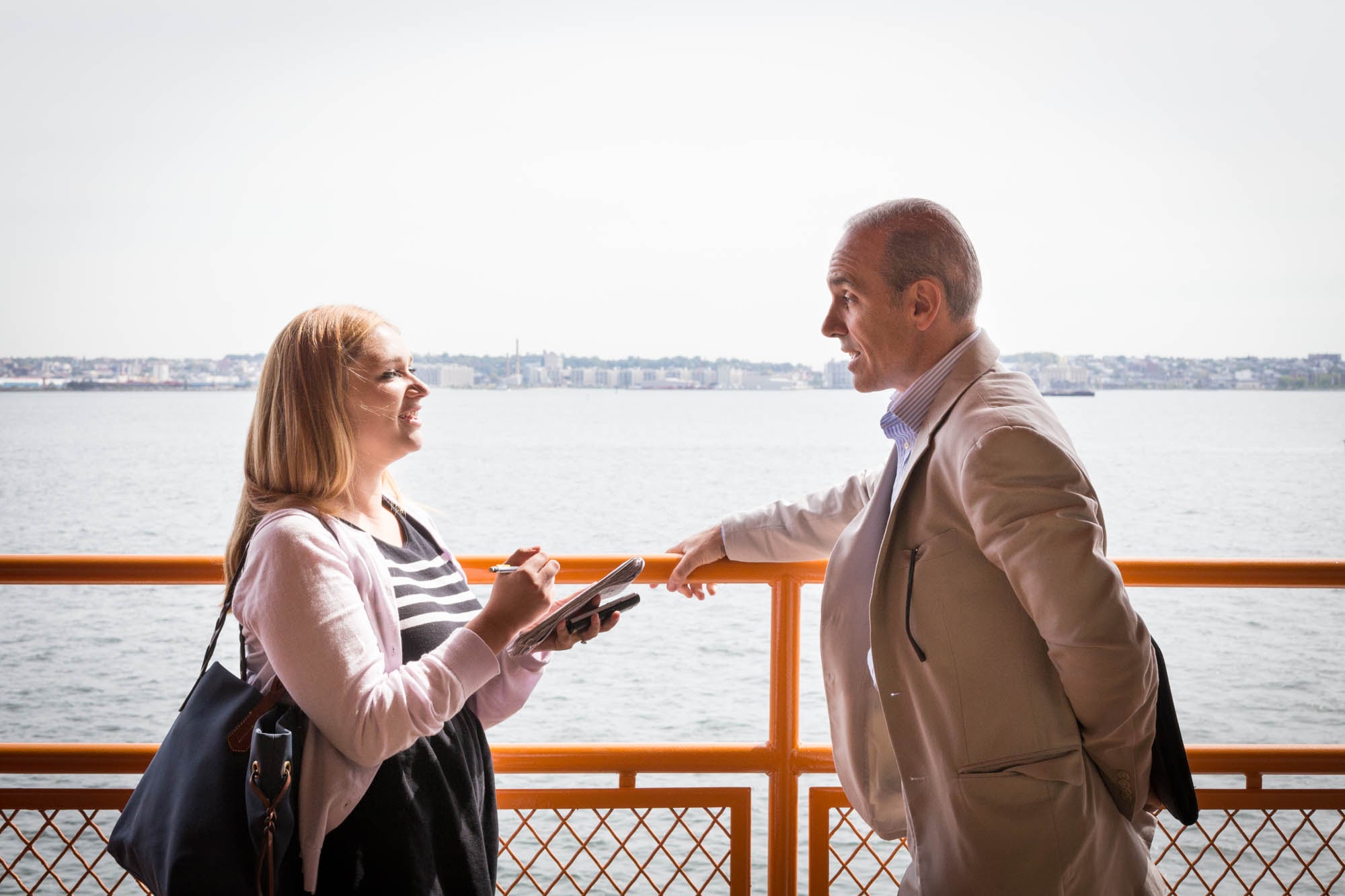 It is somewhat depressing to me that both famous representations of my home town are ways you can leave it, but I didn’t have much time to consider it. After a lunch break, I hopped aboard the S.I. Newhouse, named for the media scion whose empire began with the Staten Island Advance, my alma mater and the borough’s local paper, which features an illustration of the Staten Island Ferry on its banner. On the 3 p.m. boat I held a meeting with an unnamed political source—that’s journalism speak for gossiping with a pal who works for an elected official and hoping a few story ideas come out of it. On the 3:30 p.m. back to Manhattan, I was aboard the Molinari again when I tried to plug my laptop into a power outlet and encountered another problem that could kill a writer-in-residence program: it was dead.

“None of them work,” a commuter sitting nearby said. “They shut them off—too many fights.”

So I’d heard—my friend Anna Sanders, the City Hall reporter for the Advance, had broken that story. Unsurprisingly, a story about Islanders fighting over who gets to charge their iPhone went viral—and led the DOT to promise to turn the outlets back on. Our new friend said the outlet in the snack bar still worked.

On the next trip, I did some investigative reporting: I tried two more outlets on the Molinari, on the main indoor deck, with no luck. Then, I tested the outlet in the snack bar: eureka! Power! The man’s tip checked out. 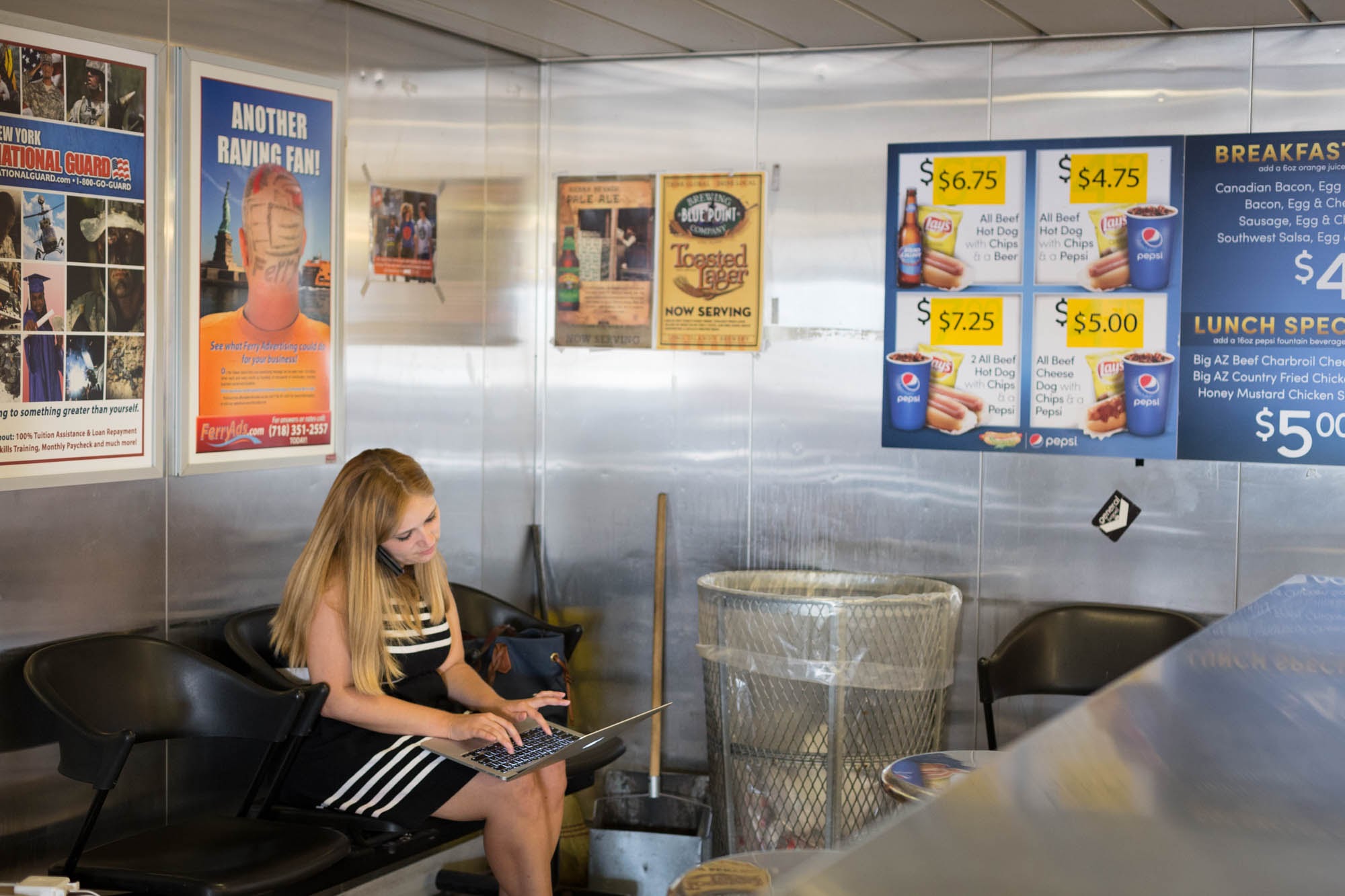 A not-very-glamorous office in the snack bar of the ferryboat Guy V, Molinari. Kaitlyn Flannagan for Observer

Just in time: I was expecting a call from Eddie Joyce, a Staten Island novelist and author of Small Mercies. The view from the back of the boat as it was in the 90s—Manhattan, with the Twin Towers still standing, behind the diamond-shaped fencing at the edge of the ship—adorns the hardcover.

“I distinctly remember as a teenager, going to the city and then coming home as it pulled away and the Twin Towers sort of loomed above you,” Joyce recalled, as I typed away on a seat near a garbage pail in the snack bar. “It really sort of captures, in that moment, the disconnect or the relationship that Staten Island has with the rest of the city: Part of it, but not exactly.”

If you ride the ferry long enough, tweet about it enough, and have enough followers in city government, eventually the DOT notices. I was standing on the back deck looking at Manhattan and chatting with a friend who works for the city comptroller—you always run into someone on the ferry, after all—when the agency called and asked if I’d like a little behind-the-scenes tour.

That’s how I wound up spending the next trip in the pilot house of the Spirit of America, marveling at the size of a giant container ship that cut us off just as we were about to depart St. George—the “harbor traffic” commuters doubt exists when the DOT blames it for delays. The pilot house was full of high-tech screens next to relics from prior eras: a cassette player, a wooden steering wheel that actually worked. Riders (me among them) sometimes complain about bumpy landings, but seeing the efforts of the captains maneuvering the floating behemoth into a tight slip where the currents of the East and Hudson Rivers meet, all while jet skis whizzed by, made it feel less so. 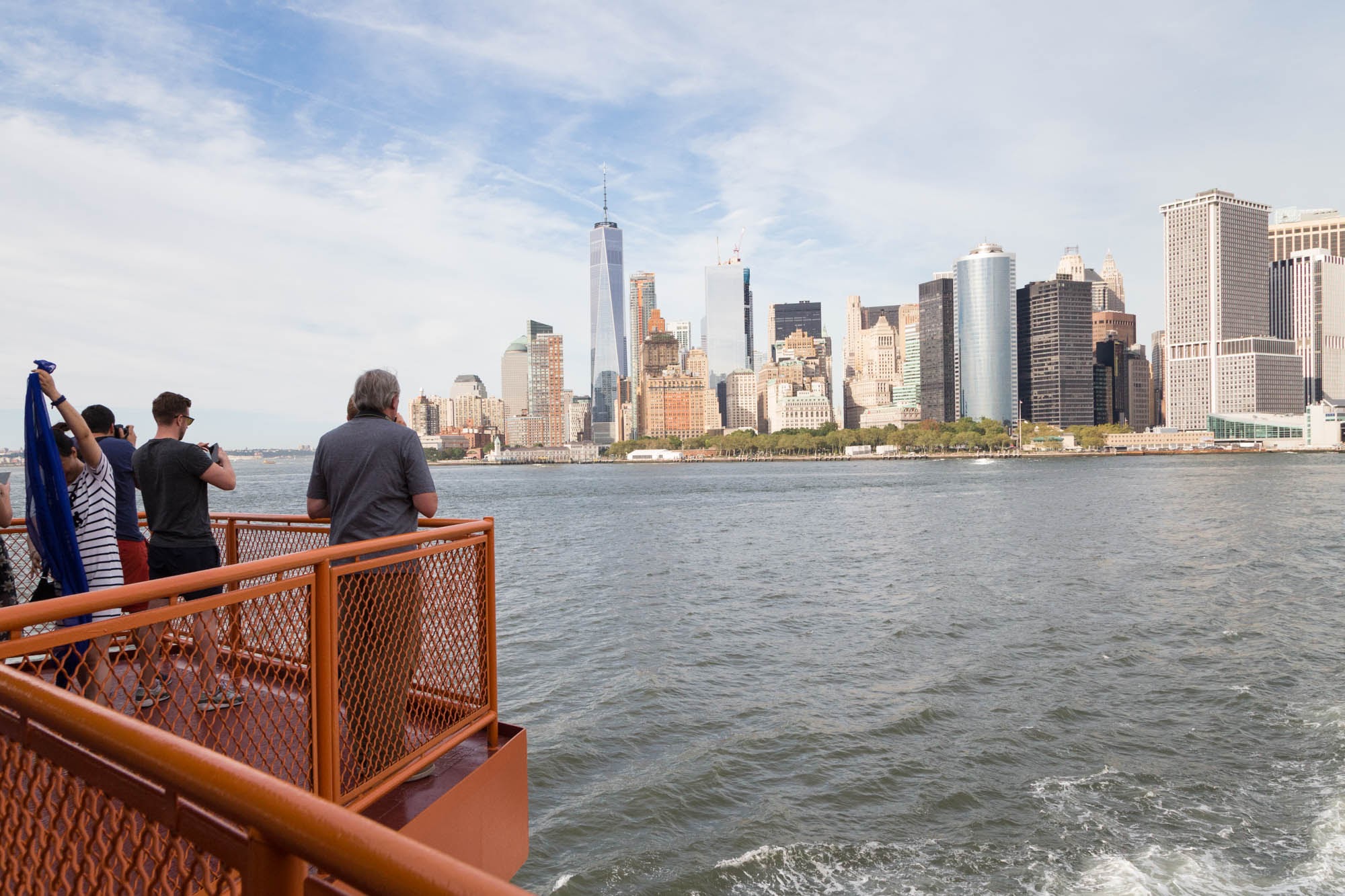 “It’s a complicated thing,” noted Kyle Griswold, chief of staff for the DOT’s ferry division. “It’s not as easy as just parking a car.”

But while the commuters complain, the tourists (and sentimental New Yorkers and would-be-writers-in-residence) love it. “I think we have the highest-rated public transit facility on Yelp,” Griswold said.

Our last journey came as the sun set behind the Statue of Liberty, and I celebrated in traditional ferry fashion: with a 16-ounce, $3.50 can of Bud Light from the snack bar.

If you’re looking for a way to mix up your routine of writing in coffee shops, you could do a lot worse. And in the future, the DOT may even set aside a good seat for you.

“This is a wonderful idea for us to explore since we know the Staten Island Ferry gives 70,000 opportunities each day for riders to reflect, observe and report just as Jillian did,” DOT Commissioner Polly Trottenberg said in a statement that, let’s admit it, is probably just the municipal version of humoring me. “The 25-minute ride between St. George and Whitehall provides dramatic views of New York Harbor and Lady Liberty, a passport to explore the great borough of Staten Island, and the chance to enjoy a real New York moment.” 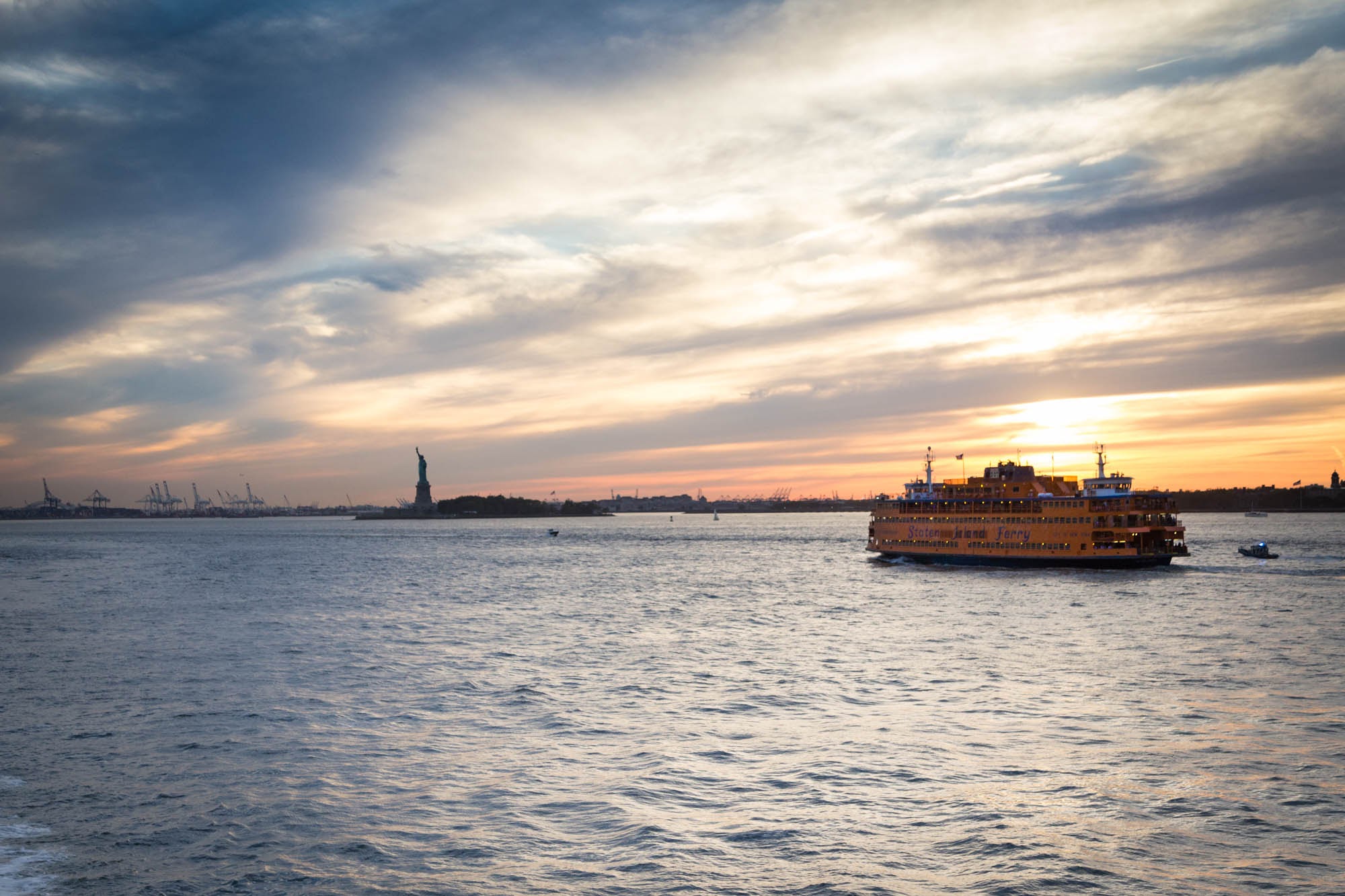 The Staten Island Ferry at sunset. Kaitlyn Flannagan for Observer