KENNEDY SPACE CENTER, Fla.—For the first time in its history, NASA is launching an audacious long-term mission to intercept an asteroid and gather samples for return to Earth. The spacecraft, dubbed OSIRIS-REx, is currently in final preparations for launch from Cape Canaveral.

OSIRIS-REx will launch on September 8 on a ULA Atlas V rocket for a journey that will span more than seven years, taking two years just until it reaches its target: a carbon-rich asteroid named Bennu. Scientists selected Bennu as it may contain materials that existed during the birth of the solar system—a distinct feature that could provide clues to how life formed here on Earth.

“Sample return is what this mission is all about. Getting the material here in our laboratories so we can do the detailed investigations to address some fundamental questions,” said John Loiacono, OSIRIS-REx deputy project manager during a briefing at Kennedy Space Center. “We’re looking at the carbon-rich asteroids and our target Bennu falls into this category. We believe these hold precious organic molecules that were the precursors to life on our planet.”

Researchers also intend to study the potential for a catastrophic impact by Bennu and similar small bodies on Earth. The asteroid, about 1,600 feet in diameter and traveling at 63,000 mph, comes relatively close to Earth every six years. In the year 2135, Bennu is expected to come within 186,000 miles—closer to Earth than the Moon.

“Bennu was chosen because it’s accessible and its orbit is so much like ours. Because of its size, we are able to do this detailed survey and mapping. We’re actually able to go up and touch the asteroid. It rotates at such a rate that we can actually do a safe collection of that sample,” Dr. Christina Richey, deputy program scientist at NASA, told the Observer.

When it comes to any danger posed by Bennu, Dr. Richey says we can breathe easy for now as it has very little chance of hitting Earth. In fact, studying how these bodies move is crucial to one day foreseeing (or even preventing) these kinds of threats. NASA intends to do this by studying the Yarkovsky Effect, which governs the trajectory of Bennu and similarly sized objects. 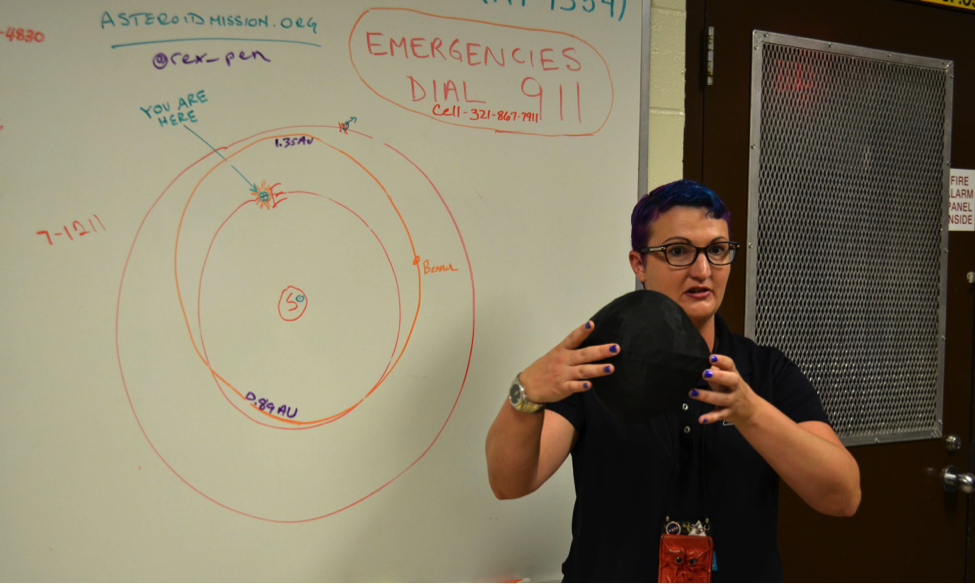 Dr. Christina Richey holds a model of the asteroid Bennu along with a sketch of the OSIRIS-REx intercept trajectory. (Photo: Robin Seemangal)

“We’re going to start to understand the Yarkovsky effect better. How it actually changes the orbits of these small bodies. We’re actually going to bring back that data to put into models to test these theories and improve those models,” explained Dr. Richey. “This will make it easier to understand how all small bodies and all these different asteroids in the solar system are moving. This is critical for us. We want to understand why the Yarkovsky effect changes the way it does.”