Lysa III inspired the most vocal response by far at the curator-led docent tour at the National Museum of Women in the Arts in Washington D.C. Composed of fiberglass, resin and steel, the piece, by Jennifer Rubell, consists of a busty mannequin who functions as a nutcracker. Patrons may insert a walnut in the opening between her legs. Pressing down on the top leg cracks the nut. Rubell has shown similar works at the Dallas Contemporary and Frieze, but the piece was new to this D.C. crowd. Jennifer Rubell is, of course, the daughter of Don and Mera Rubell, the Miami-based mega-collectors, but also an artist in her own right.

Associate Curator Virginia Treanor was leading the tour of the museum’s the new show, NO MAN’S LAND: Women Artists from the Rubell Family Collection, which opens to the public today. The exhibition features large-scale paintings and sculptural works by 37 contemporary artists from 16 countries, including their own daughter. The title references historical land parceling, battlefields, and the simple fact that no men are represented in the show. The security checklist available at the beginning of the exhibition provided specific instructions for Lysa III: “FYI – You do not have to pull the leg all the way down to crack the nut – if you do it smashes it into a lot of tiny pieces.” (Second prize for best security checklist note relates to Mary Weatherford’s Past Sunset: “Apparently, people like to touch the neon.”)

“Our registrar is having a heart attack,” said Virginia Treanor, the associate curator, on the topic of Lysa III. There will be nut pieces all over the gallery. The museum will also need allergy signage.

Treanor herself was particularly interested in a different artist she’d only discovered once she began exploring the Rubell Collection. “I was really drawn to Celia Paul’s work,” she said. “My background and my first love is old master painting and I really saw her reaching back to that tradition but giving it such a fresh interpretation.” On the other end of the spectrum, she was excited to show two works—Infinity Net paintings—by Yayoi Kusama, easily the best-known artist included.

Treanor explained her process for whittling down the Rubell Collection works and turning those pieces into an exhibition. She and Chief Curator Kathryn Wat visited the collection in Miami and first selected their favorite pieces. From that list, they noticed that themes of the body and process were emerging. “Because I tend toward more of the historical side of things, the body and the representation of the body and the nude female form especially interested me,” said Treanor. “And Katie is really passionate about artistic process and the philosophical associations with the work that goes into creating a particular piece. We teased those themes out.” From the list of works they liked, they pulled the ones that fit into those themes. The exhibition itself now separated into two sections while, of course, some works could easily belong to both.

Anicka Yi’s obscurely titled Life Serves Up The Occasional Pink Unicorn provides some of the exhibition’s most unique media. A trigger warning might be necessary here for some conservators. Yi’s work, which expands across an entire gallery wall, features tempura fried flowers affixed to five panels of Plexiglas. Ten chrome plated dumbbells rest on stainless steel shelves behind them. Treanor noted that if you get close enough, the work exudes a particular scent. Questions about decay, transparency, and ritual (of eating or exercising, perhaps) vaguely present themselves. Solange Pessoa’s 4 Hammocks comprises fabric, earth, and sponges. Forms that look like potatoes of myriad sizes hang from the wall like a giant hammock you can’t actually lie on. There’s something corporeal and grotesque about the work, yet comforting at the same time.

The artists in the show evidence a wide variety of concerns that extend far beyond artistic process and the body. Hayv Kahraman, one of the exhibition’s youngest artists (born in 1981), explores immigration and beauty standards in her paintings. Dana Schutz hints at artistic voyeurism in Lovers, a painting of two lovers in a clearing who aren’t quite alone—an arm reaches out from the side of painting toward the couple. Rosemarie Trockel, who works in wool; Sonia Gomes, who works in fabric; and Tauba Auerbach, who works in woven canvas all appropriate materials typically associated with the female sphere for their own work.

The exhibition also situates the Rubell’s Collection in a city where they’ve long been trying to expand. In the past few years, the Rubells bought Randall Junior High School in Southwest D.C. (from the Corcoran Gallery of Art and College of Art + Design) and began planning its transformation into a cultural center. Men, and their art, might even be allowed to enter. 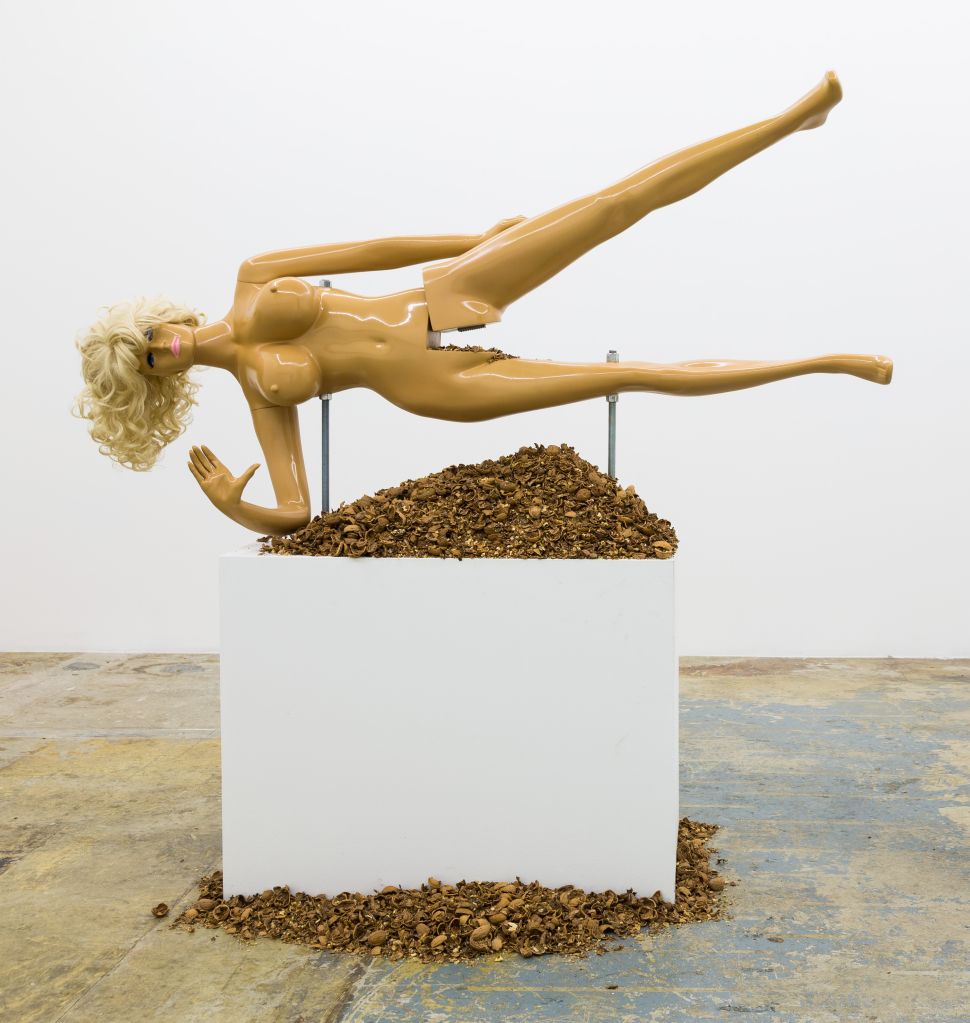