New York City Mayor Bill de Blasio said investigators have still not determined the motive behind a bombing in Chelsea last night—but urged New Yorkers to be on the alert and to expect increased police presence around the city today.

“For all New Yorkers, a central message we want to give today is be vigilant—be vigilant at this point in time,” de Blasio said today at a briefing at One Police Plaza, noting the already high-security United Nations General Assembly will be held in the city this week. “You will see a very substantial NYPD presence this week. Bigger than ever.”

But the mayor resolutely refused to speculate whether the bombing, which injured 29 people who have all been released from the hospital, was an act of terrorism—insisting that while it was “an intentional act” as opposed to an accidental explosion, they did not yet “know the motivation” behind it.

“It was intentional, it was a violent act, it certainly was a criminal act,” de Blasio said.

He and Police Commissioner James O’Neill—the former chief of department whose first day as commissioner coincided with the explosion—said they did not yet know if the motivation was social, political or personal. No one has been taken into custody for placing the bomb, which was detonated on 23rd Street near Sixth Avenue, official said. A second device, fashioned out of a pressure cooker, was found nearby on 27th Street and is currently being studied by the NYPD’s bomb squad.

“I am concerned. We did have a bomb that was detonated on 23rd Street and we have no one apprehended—so of course I’m concerned,” O’Neill said. “I know we’re going to find out who did this, and they’ll be brought to justice.”

So far, investigators have not definitively tied the two devices together—though Chief of Detectives Robert Boyce said they were operated under the theory they’re related—nor have they made a concrete connection with a pipe bomb that exploded during a road race on the Jersey Shore earlier on Saturday.

The mayor’s reluctance to label the explosion as terrorism comes after Gov. Andrew Cuomo held his own press conference and said that such acts are, generally, terrorism—but that there was no apparent connection yet to any organized international terror group. (Cuomo and de Blasio, who held separate briefings, did tour the site together at 11 a.m. this morning.) O’Neill said no group or person had yet taken responsibility for the blast. Pressed on why the department wasn’t labeling it an act of terror, O’Neill said they are “acknowledging that there was a bomb blast on 23rd Street” and would reveal the motivation once it was determined.

“We’ll say it loud and clear, and if it is an act of terrorism we’re going to come out and say it,” O’Neill said.

The mayor, along with police and FBI officials, urged anyone who had seen anything unusual before or during the bomb blast to report it to the NYPD using their tip line, at 1-800-577-TIPS.

Despite imploring New Yorkers to remain vigilant, the mayor also urged them to go about their business—and said that’s what he’d found when he toured Chelsea this morning.

“I think there’s a sense of resiliency and a real faith that the NYPD is addressing the situation,” he said. 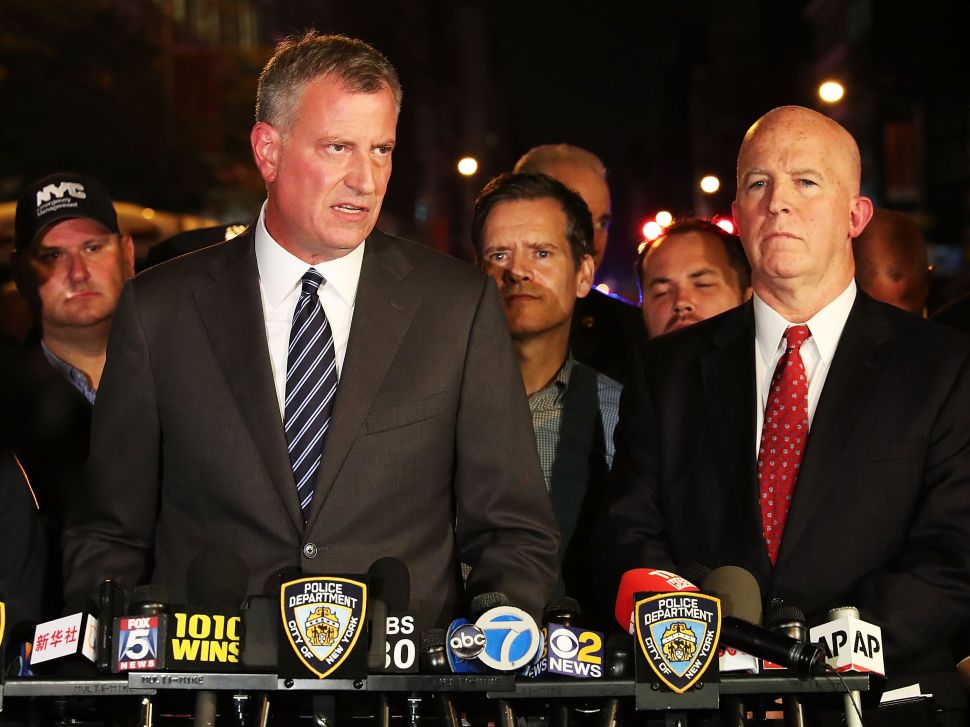