Opera has always been a stabby art, with the form’s superheated characters more often than not at daggers or swords drawn. But last night’s New York City Opera season opening double bill (which included no fewer than four onstage stabbings) was so ineptly done in every conceivable way that I was ready to grab the nearest sharp object and turn slasher myself.

The pairing of one-acts NYCO presented, though unconventional, is plausible enough. As a curtain-raiser to Leoncavallo’s familiar echt-verismo Pagliacci, in which a jealousy-crazed strolling player offs his wife and her boyfriend in mid-performance, the company offered Rachmaninoff’s relatively obscure Aleko, in which more or less the identical violence transpires, except with Russian gypsies.

What keeps Aleko out of the mainstream repertoire is perhaps its melancholy, rather misty score. But NYCO failed to do to that music justice, casting in the title role the bass Stefan Szkafarowsky, whose voice fell apart in his crucial post-stabbing scene of remorse. As the young adulterers, soprano Inna Dukach and tenor Jason Karn sounded whiny and unappealing. The only bright spots were Kevin Thompson’s sonorous Old Gypsy and a flashy turn by Andrei Kisselev as a flamboyant gypsy dancer whose next stop on his journey was surely a bus and truck tour of Chorus Line.

Pagliacci, you’d think, would be harder to kill, but here tenor Francesco Anile as the murderous Canio was working in a vacuum. His roiling middle register and trumpeting top more than made up for some rudimentary stage movement, but Jessica Rose Cambio’s brassy Nedda and Michael Corvino’s feeble Tonio drifted off in their own directions. Worst was Gustavo Feulien as Nedda’s backstreet squeeze Silvio, who lurched about like he was posing for a GQ photo shoot when he wasn’t struggling to remember his music.

The production, borrowed from Opera Carolina, bizarrely sets both operas in a rundown railroad station. You have to wonder how lax the security is in this depot that they allow dozens of gypsies to squat there indefinitely, or just how prosperous Canio’s little troupe is that they can afford a private railroad car for touring. A more imaginative director might have made something of even so unlikely a backdrop, but it seems like Lev Pugliese spent all his time encouraging the chorus to mill around aimlessly and flail their arms in the air.

Call this opening night a bloodbath, then… but not the fun kind at all. 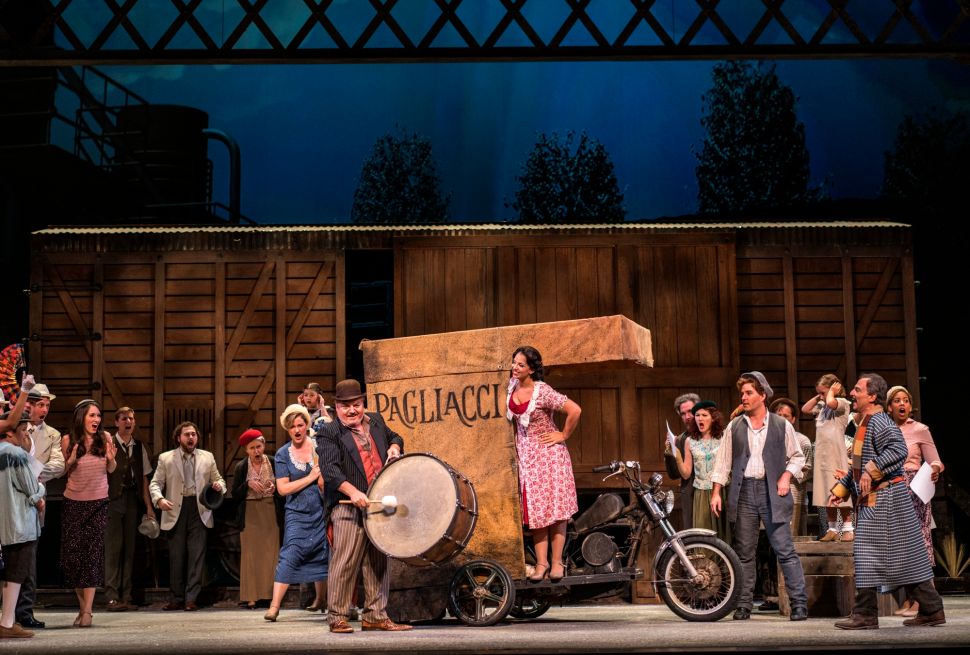