Just about every day, a letter arrives at the downtown offices of the Observer. The envelopes are covered in faces that have been meticulously cut and taped, usually of socialites, or celebrities like Jay Leno and Melissa McCarthy, or underwear models. Occasionally there’s a drawing in Russian and the letters are always addressed to “Donald J. Trump c/o Jared Kushner, Publisher of the Observer.” There’s always two stamps (often Janis Joplin). But the best part—that is, the best part other than the lack of anthrax powder so far—is the ransom note style messaging.

On all the letters, there are carefully cut newspaper and magazine headlines interspersed with shaky handwriting in all caps. The letters are addressed “Dear Donny” and mostly call Trump a liar and racist and “unpredictably dangerous.” And then they always end with a line like “Here are some women voters against Trumpie” followed by four of five photos of naked women.

The Observer gets plenty of mail (and email and phone calls) featuring advice and criticism for Donald Trump. Some people refuse to believe that the Republican nominee for President isn’t walking through our offices, commenting on pitches, suggesting editorials, and marking “Huge!” and “Sad!” on our stories that either smack Hillary or smack Trump. That’s fine. We have endlessly disclosed our publisher’s connection to Mr. Trump and it’s a fact of life for the Observer. We deal with it; we persevere.

The thing about these particular letters, though, is that they look like they take at least an hour each to compose. When I noticed 3-4 of them piling up, I asked someone else in editorial if he’d noticed any others with this distinctive pattern on the outside. He pulled out a file and said, “I knew this day would come.” We have received at least 30 of these, each painstakingly printed and cut-and-taped. They are never signed, though some of them seem to bear a Michigan postal cancellation mark.

The moral of this story: if you’re going to send crazy mail to a candidate, at least make them memorable. Should our correspondent choose to identify himself or herself, this story will be updated. 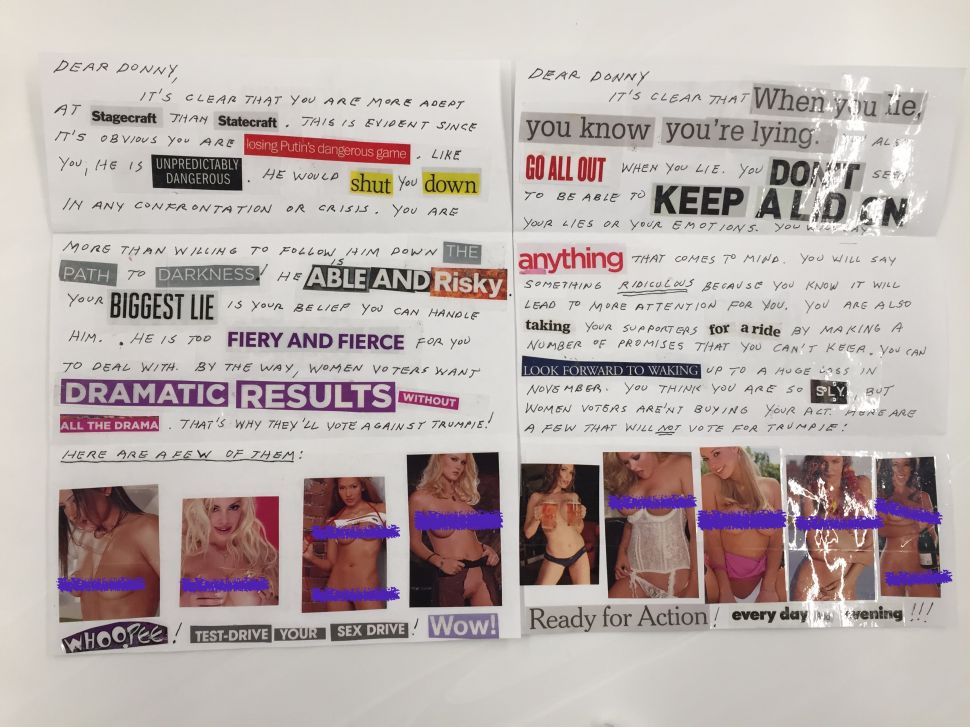