As Police Commissioner Bill Bratton wraps up his second tenure as the city’s top cop, Mayor Bill de Blasio said the NYPD leader’s controversial “broken windows” policing approach may need some tweaks—but insisted that it is “still the right approach.”

Speaking during his weekly ‘Ask the Mayor’ segment on WNYC’s Brian Lehrer Show this morning, de Blasio acknowledged that the broken windows policing strategy—coming down on smaller crimes to stave off large ones—has to be updated and implemented fairly. But he argued the policing method deserves recognition for helping to lower crime in the city over the years, a drop that largely occurred during Bratton’s first stint atop the department under former Mayor Rudolph Giuliani.

“Broken windows has to be seen for what it is: quality of life policing that helped us to address the problem of disorder that was plaguing us for decades turn the corner and it constantly evolves and it constantly has to be updated and it must be applied fairly and consistently across all communities,” de Blasio said. “There’s more to do to make broken windows a better strategy but it’s still the right approach.”

And despite the fact that the mayor and Bratton sometimes publicly disagreed with each other on a variety of issues—including the legitimacy of the Black Lives Matter movement and the extent of the city’s homelessness crisis, among other issues—he believes Bratton “just deserves all of our thanks.”

“He did more than anyone in the history of the city to make this city safer and also did more to reform police practices and create an opportunity for police and community to come together,” de Blasio said. “So I have tremendous appreciation and respect.”

But the mayor stressed that incoming Commissioner James O’Neill will bring “together a strategy of neighborhood policing in the modern world” through greater contact and coordination with local community leaders.

That strategy will involve a “cop on the beat” that people know and come to respect who will “respect the community equally,” a partnership with officers that he says comes with the advantages of modern technology and advanced training, which includes helping officers that have the ability to de-escalate in certain situations and know how to work better with the community.

“Jimmy O’Neill, who knows the city so personally and so deeply is the person who will bring that to life,” de Blasio said. “I am absolutely certain the best is yet to come both in terms of the relationship between police and community and in terms of lowering crime. I have total faith that Jimmy O’Neill knows how to do it.”

De Blasio picked Bratton, now 68, to lead the nation’s largest police department in 2014. The precipitous decline in crime during his first tenure in the 1990 helping to popularize the “broken windows” theory of policing. He also created and implementing CompStat, a system that tracks crime patterns throughout the city. He will be taking a job in the private sector with Teneo, a firm that advises CEOs.

Bratton’s tenure as police commissioner has been met with mixed reviews. He helped bolster the mayor’s record on decreasing crime: the use of stop-and-frisk has dropped under his tenure and crime in the city is at an all-time low. But his focus on broken windows policing has pitted him against activists who feel the approach unfairly targets minority neighborhoods.

And Bratton and the mayor are currently fighting Gov. Andrew Cuomo, elected officials and activists over whether state law allows the city to release police officers’ disciplinary records to the public. He has also been criticized by advocates for a back-room deal he made with Council Speaker Melissa Mark-Viverito that would allow the NYPD to handle a package of police reform bills known as the Right to Know Act despite the bills having enough sponsors in the City Council.

A caller also expressed concerns about the controversy surrounding Politico’s discovery that the NYPD paid Officer Daniel Pantaleo, the officer who put Staten Island man Eric Garner in a chokehold that led to his death, nearly $120,000 ($23,000 overtime and nearly $13,000 in unspecified extra cash).

He said both O’Neill and Bratton have “made very clear that situation’s gonna change” and that he had “no idea” officers on modified duty were being given that opportunity.

Bratton and O’Neill indicated that the new practice going forward will be that officers will not receive overtime unless it is signed off by the chief of department or if there is a “particularly intense need” such as an emergency situation.

“So I think that what happened sends a very unfortunate message to the people of New York City and that is being fixed as we speak,” de Blasio said. “So going forward, officers on modified duty will not have the opportunity for overtime unless it is signed off by the chief of department.” 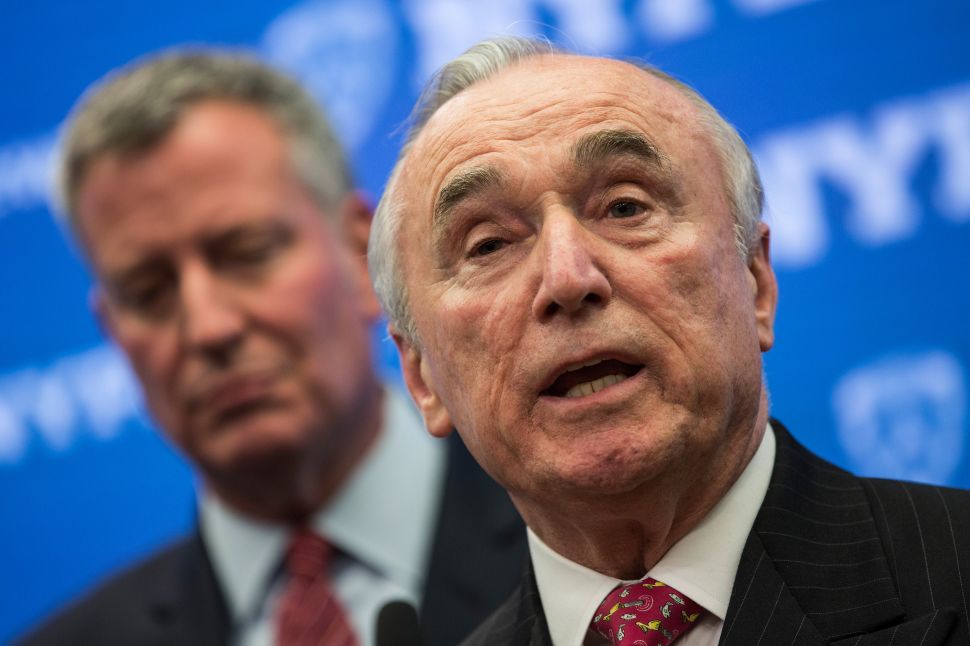