As a therapist, there might not be any show currently running that I like more than HBO’s new comedy, High Maintenance.  I like it a lot as a regular Human, too, but it really shines in its willingness to show the private moments of conflict, both inter- and intra- personal, that we all like to hide when we’re outside our homes.  This is the kind of revelation I spend a lot of sessions waiting for, because it’s in these moments of quiet conflict that our deepest vulnerabilities appear.  And while High Maintenance tends to play these moments of extreme emotional confusion for honestly appropriate laughs, it also treats all its characters with the respect deserved by anyone willing to show up as their most vulnerable self.

The show’s most recent episode, Museebat, follows a young Muslim woman, Eesha, as she navigates the pitfalls of living with her socially conservative aunt and uncle, as well as their young children.  We quickly learn that she is college-aged, has a group of smart and metropolitan friends, cares deeply for her family, moved to New York from Texas for school, and is damn excited to cut loose.  In a telling scene, we see her take her young cousin Nasim, who she picked up from school, to a bodega on the way home from work.  Eesha tells Nasim to go pick out anything she wants from the store, and while she’s distracted Eesha tries to buy cigarettes from the cashier.

What happens here sets the tone for everything that follows.  The cashier, adopting an attitude of supreme boredom, asks Eesha for her ID.  Eesha produces it, and is informed that she needs to be 21 to purchase.  She tells him that in Texas you only have to be 18, and asks if he’ll make an exception “…just this once, please”.  We don’t get to see how the negotiation resolves, but we don’t need to: is there any doubt that he sells her the cigarettes?  And does anyone think this exception has only happened just this once?  It’s an entirely typical scene for young women who are coming of age and learning to step into their desires, and their power.

This is an issue that comes up a lot with my clients, particularly among my young clients.  What Eesha is dealing with is a question of boundaries, both explicit and implicit, as she navigates the transition from childhood to adulthood.  In therapy, the idea of boundaries is the idea of how we make behavior acceptable or unacceptable.  It is also a classic marker of maturity, as boundary holding indicates self-awareness and integrity.  And while holding clear boundaries is a self-evidently good idea, it’s distressingly rare to see people who are willing to do so.

The reason most people are unwilling to be clear about our boundaries is that revealing them makes us look vulnerable.  A boundary is inherently a fence around concepts that make us feel small and childish.  If I tell someone that, say, I dislike being flaked on strongly enough to make reliability a crucial component of my relationships, then I have also revealed that I feel insecure around being someone’s second-best choice.  It’s the basic calculous of weighing our own needs against our own fears and, unfortunately, many people are very willing to let their fears win out.

So in Eesha’s case, we have a young woman who is starting to learn the value of holding boundaries and receiving a lot of conflicting messages about them.  On the one hand, we see from the way that she only wears her hijab around her cousins and hides her smoking from them that she acknowledges other people’s boundaries are worth respecting.  And from the way she clearly adores Nasim, the most observant member of her extended family, we can tell that she not only plays within those boundaries, but also respects them.

On the other hand, we see that she is completely hemmed in by those same boundaries that she can find respect for.  And much like she observes with the bodega cashier, she is beginning to learn that concealing herself – that is, concealing how she demands to be treated as an adult – can allow the seemingly overlapping boundaries of her own life and those of her cousins to never actually touch.  Of course, this means lying to her family, as well as occasionally hurting them by agreeing to their rules while secretly scheming to pursue her own.  At the moment we meet her in the episode, she’s trapped in a bind.

It’s when Eesha meets The Guy that she begins to escape that bind, albeit inexpertly.  At around the midpoint of the episode, Eesha sees The Guy making a delivery to her neighbors and decides to try and buy some weed from him.  In prepping for this, she drops her conservative act, unfolds her septum piercing, and adopts a too-cool attitude while futzing on her phone.  Whereas with the bodega cashier she used the innocent and unaware persona she has honed with her cousins, her play in this situation is much closer to her private sense of identity.

The Guy pays attention, he communicates openly, and he holds his boundary. Compared to her own world of secrets and appeasements, this must look like a revelation.

And it doesn’t work!  She tries to buy some weed, but The Guy simply and courteously turns her down.  He explains that he has a set of rules he follows in who he sells to, consisting of not selling to children and only selling to people within a referral network.  It’s a complete reversal of the bodega experience – The Guy pays attention, he communicates openly, and he holds his boundary.  Compared to her own world of secrets and appeasements, this must look like a revelation.

It’s no wonder that this interaction begins a change in Eesha from self-concealing to boundary-revealing.  Not only is it a perfect example from a respectable near-peer of how to assert yourself skillfully, but it also serves as an initiation into adulthood, a time marked by making the difficult decisions required by boundary holding.  During their negotiation, The Guy tells Eesha that he doesn’t sell to kids, and she tells him she isn’t one.  Rather than ignore her like the bodega cashier, he listens and gives her the rest of the rules, a kind of roadmap to how adults gain his services.

When working with teens and young adults, this is a crucial step.  People transitioning out of childhood are operating with children’s strategies – behaviors like lying and trying on false identities – to pursue adult rewards.  As anyone who’s ever been age 16-25 knows, it’s a fucking mess.  The trick to getting people to grow up is to treat them as if they already are, and in so doing show them how real adults behave.  Leave it to the pot delivery guy to raise our kids right. 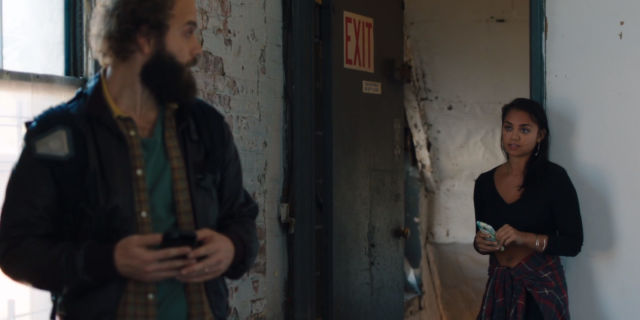