Welcome to our TV Fashion column, where TV Ate My Wardrobe‘s Emma Fraser discusses the trends in television apparel. This week: Fleabag teaches us what to wear in our moments of despair.

Mascara stained cheeks and an expression of despair from Fleabag creator/star Phoebe Waller-Bridge on the key art suggests a certain level of emotional crisis is to be expected from this character, but to borrow a line from the Crazy Ex-Girlfriend season 1 theme song; the situation’s a lot more nuanced than that.

There are many ways to deal with feelings of personal loss; you can bury those emotions deep by putting on the appearance that all is fine, you are coping, and wait for it to bubble up when it can’t be pushed down any further. On Fleabag this is the method that is chosen by the title character of the same name (we never hear her actual name) and this new Amazon Prime acquisition (by way of the BBC3) joins the likes of You’re the Worst, Transparent and Casual in the realm of gut-punch comedy.

Walls are erected and broken down in equal measure with direct address to camera giving an aspect of intimacy as Fleabag shares some inner thoughts combined with flashbacks, but she is also withholding from those she interacts with; both the audience and her family/friends/the guys she is hooking up with. Layers are shed in the same way her clothes are in the first episode; on purpose, accidentally and giving none of the fucks abandon.

A classic black trench proves versatile – this garment isn’t just for spies – giving the impression to her late night caller that she has just got in (which is far from the case) while also looking incredibly sexy. Same applies for the guy’s number she gets on the bus the following day. It also doubles as suitable attire for a meeting, even if that meeting goes sideways after an accidental bra flash and it almost conceals the sweater she ‘borrowed’ off her sister an age ago.

The latter results in a cab ride home where the layers are pealed back revealing Fleabag’s bra, the sculpture she just stole from her step-mother and the reason why she looks so broken on the Fleabag promo poster (spoilers to follow). In a moment that gives this comedy its gut-punch category title Fleabag tells a ‘funny’ story about her best friend and business partner Boo, and how she ended up accidentally killing herself; it isn’t just the recent-ish loss of her mother that is serving up an undercurrent of grief. The cab driver looks aghast at the scene which is unfolding in the backseat, but she is at peace for the first time in this episode; vomiting feelings and unburdening her soul has a way of making things better. Except this isn’t the whole truth.

While dealing with the death of her best friend there is also a financial burden from Boo’s demise; now Fleabag is shouldering their floundering cafe by herself and she can’t quite bring herself to ask her rich sister – who has two degrees, a husband and a Burberry coat – for a loan. At the silent retreat their father sends them on because he is also just as incapable of talking about his feelings, the discrepancy in beauty products shows a) that the amount of products available is pretty ridiculous and b) Claire is wealthy.

Talk of cheap underwear that gives you thrush leads to the first Boo flashback and some accidental honesty in a changing room; Boo tells Fleabag how terrible her outfit is because she doesn’t realize these are her actual clothes. Fleabag has been wearing a coat all day and it is significant that after this moment we never see her wearing this garment again whether because it is too painful or she took Boo’s fashion criticism seriously. A large portion of her wardrobe is stripes (a lady after my own heart) and I definitely found myself noting big similarities between Fleabag’s ensembles and my own. I’m pretty sure we have a similar budget.

Fleabag’s relationship with Claire is full of awkwardness including an aversion to affection that results in accidental physical violence when a hug is attempted. It isn’t surprising that when it is this hard to express familial love that Fleabag ends up baring her sole to the guy she accidentally flashed. There’s no way she’s going to talk through her feelings with her artist godmother, now step-mother and a caftan does not a empathetic person make. Olivia Colman gives such a great turn as a character that is superbly passive aggressive and awful with such little regard for her step-daughters.

Red lipstick is another staple part of Fleabag’s style arsenal and it might sound trite or cliché, but there really is something powerful when applying a shade of crimson this bold. Clothes are expensive and makeup can be too, but there is a reason why lipstick sales continue during a recession. I am relatively new to bold lipsticks and my foray into this trend coincided with finding out I had to wear glasses all the time and seeing Carrie Mulligan wearing a striking tone in Shame. There is an element of wanting to look in control and something about wearing red lipstick gives a much needed boost. It is why Donna opts for a strong lip color on Halt and Catch Fire to a business meeting before a couple of douchebros try and undermine her with their assumptions about why she picked that shade. Keep the red lipstick flag flying, Donna.

Giving off the impression of control is not the same as being in control and this excellent shade of red – personal recommendations include the often cited MAC ‘Ruby Woo’ and Urban Decay ‘F Bomb’ – is an important part of Fleabag’s look. But it doesn’t mean that she isn’t in pain and in what is perhaps the highlight of the season, Fleabag lets down her guard at the silent retreat in episode 4 and reveals exactly how she feels “I just want to cry all the time.” Clothes and makeup do a good job of painting over the cracks, but sometimes words are required to confront grief and catharsis can come from mascara stained cheeks. 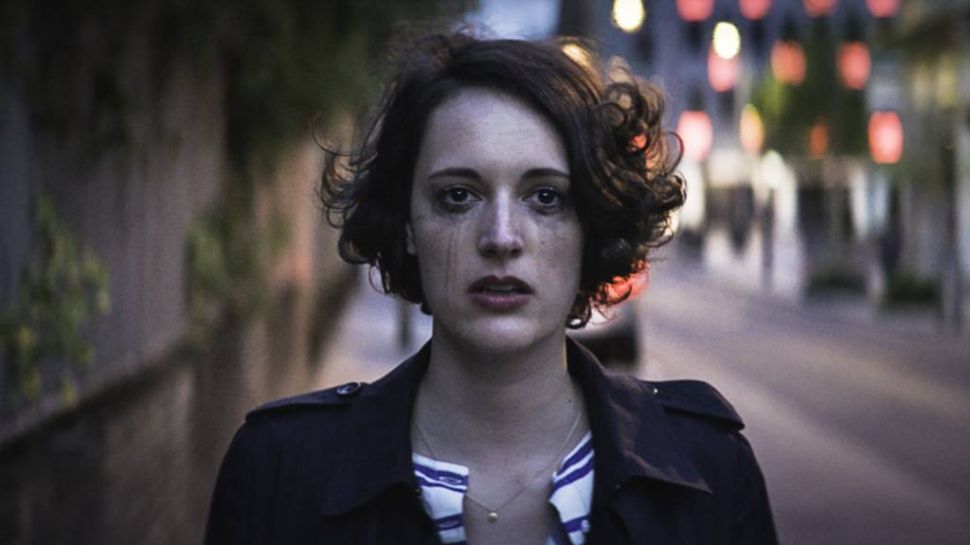