Police Commissioner Bill Bratton blamed the media for the NYPD’s crackdown on disclosure of officers’ disciplinary records last week—but elected officials and advocates say it is the mayor and the commissioner who are flouting state law.

Last week, the Daily News reported that the Police Department is ending its practice of publicly disclosing a police officer’s disciplinary record, arguing the 1976 state Civil Rights law makes it impossible for them to release the information. But elected officials and advocates say they are filing amicus briefs in opposition to the city’s appeal of a July 2015 state court decision that called for the release of a summary of misconduct findings against Officer Daniel Pantaleo, who put Staten Island man Eric Garner in a chokehold that killed him, noting that the law permits released based on a court order.

“Change does not happen without an honest conversation in our communities, in our courthouses, at City Hall about how we have real reform in the criminal justice system, real reform in our communities and real relationships between NYPD and the people they serve,” Tina Luongo, attorney-in-chief for Legal Aid Society Criminal Practice, the plaintiff in the court case, said.

Manhattan Borough President Gale Brewer said that the state’s Freedom of Information Law is a “vital tool in realizing open government” and that it has “necessary exceptions to full access to government functions” that include individuals’ personnel records which contain private information.

But the state court order and the fact that claims against Pantaleo are substantiated are an exception, she said.

“What is sought is the number, the count of claims against this officer that were in fact substantiated,” Brewer said. “Further, the FOIL request seeks specific recommendations made to the nipped as a result of these substantiated complaints. I am disheartened that the CCRB is resisting then court’s order directing the release of this information.”

New York State Supreme Court Judge Alice Schlesinger ordered the release, which had been sought by The Legal Aid Society under FOIL.  Elected officials and advocates said the de Blasio administration is appealing that decision, arguing that the fact that 50-a should also apply to the release of Pantaleo’s misconduct, which they say the administration views as a narrow request of the Civilian Complaint Review Board.

The activists and politicians asserted the state already has one of the strictest secrecy laws in the country relating to officers’ disciplinary records, and blasted the de Blasio administration’s appeal as further undermining transparency and accountability.

Bratton and Mayor Bill de Blasio both claimed they are following the state law by not releasing disciplinary records, and insisted that it is up to Albany to change that law—a change they both said they support. Bratton blamed a journalist for filing then FOIL request that led them to discover they were not following the law correctly.

Councilman Ritchie Torres, one of two Council members rallying colleagues to revolt against Council Speaker Melissa Mark-Viverito over a package of police reform bills, said that whenever a municipal employee engages in misconduct, it is subject to disclosure by the city’s Conflicts of Interest Board—a standard he says should be applied to officers as well. He said the CCRB “is failing to serve” if it does not inform the public.

“The standards that apply to every other municipal employee should apply to New York City police officers who have the power to kill,” Torres said. “The public has a right to know when that power is abused.”

In an emailed statement, the Law Department said that it welcomes the filing of amicus briefs on the scope of the Civil Rights Law.

“The lower courts have issued varying decisions and we seek clarity,” the department said. “More arguments and views before the court will provide the court with a more thorough view of the interests at stake and help it deliberate and provide thoughtful and clear guidance.”

The NYPD did not respond to a request for comment. 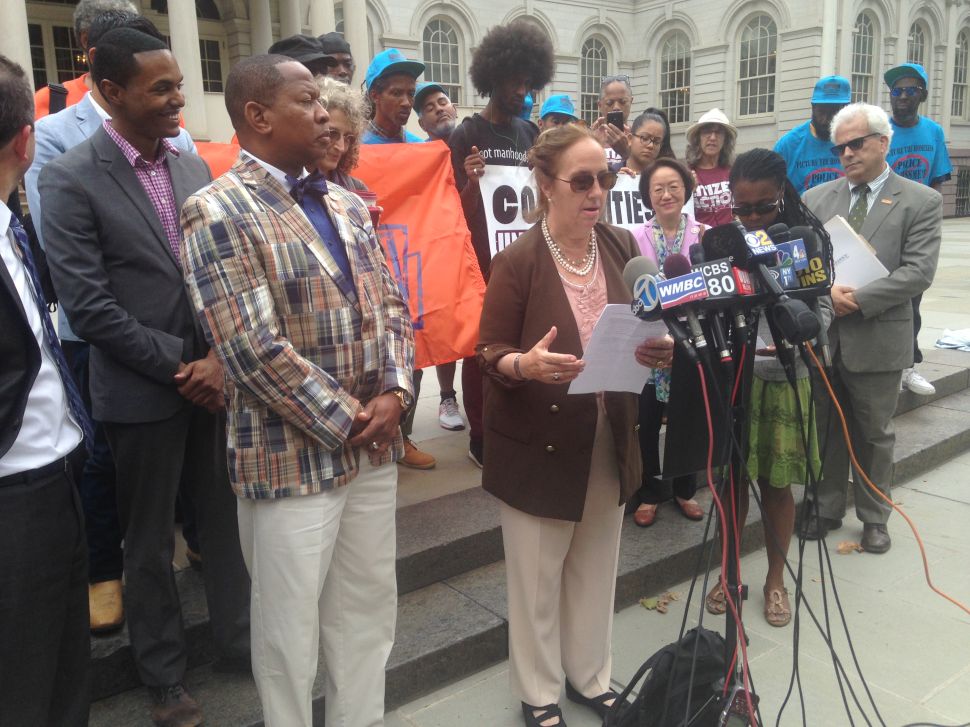