If the city wants to create more affordable housing and solve its homelessness crisis, elected officials and homelessness advocates say one way to do it is to conduct a citywide count of all vacant properties.

The package of bills, known collectively as the Housing Not Warehousing Act, has been introduced in the Council and was scheduled to be discussed at a hearing of the Housing and Buildings Committee today.

A 2011 census conducted by Hunter College and Picture the Homeless found enough vacant buildings and land in just 20 community districts to create housing for 199,981 people.

Public Advocate Letitia James said the city has not seen such a significant degree of homelessness—60,000 homeless New Yorkers, including 14,000 families and 23,000 children—”since the Great Depression” and that there is also a “critical shortage of spaces for schools, libraries and open spaces.”

“I’ve contacted so many individuals who’ve said there’s a lot here in my own district,” James said. “There’s a lot here, there’s a lot there. We were promised this. Move the process along and build. But you can’t build if you don’t know what you have.”

One bill, introduced by James, calls for the creation of a mandatory registry for all landlords holding their property vacant, also subjecting them fines for failure to register. Amendments could also introduce an escalating fee linked to the length of time the property remains vacant.

Another bill, introduced by Councilman Ydanis Rodriguez, mandates an annual count of all vacant property in the city. And Councilman Jumaane Williams introduced a third bill that would compile a list of city, state, federally and authority-owned vacant property suitable for the affordable housing development.

Advocates from Picture the Homeless, the Urban Justice Center and Gay Men’s Health Crisis held up signs and shouted chants such as “Housing’s what we’re fighting for, don’t let landlords shut the door!,” “Empty buildings don’t make sense, what we need are affordable rents!” and “Vacant buildings are a crime, landlords trying to make a dime!”

Al Williams, a member of Picture the Homeless, said the bills ensure “housing for everyone,” noting the gentrification that minority neighborhoods are currently experiencing.

In 2006, Picture the Homeless conducted a Manhattan-wide count of all vacant properties in conjunction with the office of then-Manhattan Borough President Scott Stringer.

Stringer said 300 individuals looked at vacant lots and abandoned buildings and found that there were 2,200 vacant properties in the borough, with enough space to create 24,000 affordable housing units.

The comptroller also said that an audit conducted by his office this year found that there are 1,175 vacant properties in the city, 556 of which are in Brooklyn—and that an estimated 57,000 low-income permanent housing units could be built.

“But what the city has said to me is no, no, no, all of these properties are already accounted for,” Stringer said. “Can you believe that? So if they’ve already made deals on the properties, who did they ever consult? They didn’t consult the community boards, they didn’t consult anybody.”

And the elephant in the room appeared to be Mayor Bill de Blasio’s affordable housing plan—in particular, the Mandatory Inclusionary Housing proposal.

That plan experienced a recent blow when the City Council voted to reject the Sherman Plaza proposal in Inwood after the local Council member, Rodriguez, expressed concerns about the bulk and size of the project and insufficient affordable housing (But the city was able to strike a deal with developers ensuring 50 percent of the units were affordable through city subsidies.)

The Council’s vote in favor of the La Central development in the Jerome section of the Bronx yesterday at its monthly stated meeting, however, was seen as a victory.

Although Stringer said changing zoning laws “to let some people build temporary affordable housing” is a “tool in the toolbox,” the city has to take a step further: in addition to addressing the vacant property problem, the city needs to “build a trust with communities,” he says.

“That’s what we did when I was borough president,” he said. “And so I think they just have to go back and start engaging the community boards, talking seriously about land use and zoning. When you do that, you get results.”

But the city says that of the 1,131 vacant properties the Department of Housing Preservation and Development controls, 670 are suitable for residential development. And it says 400 of them are already in HPD’s pipeline, with the remaining 270 to be designated for development within the remaining years of the city’s housing plan.

The remaining sites pose significant development challenges—lack of basic infrastructure and flood or hurricane zones, for example—or are being evaluated for other imperative uses, including parks, precincts and other services, the city said.

“We’ve looked and looked at our other vacant sites, but the truth is they have real challenges that make them unsuitable for housing,” Melissa Grace, deputy press secretary for the mayor’s office, said in an emailed statement. “Some are needed to build new schools or parks, others have contaminated soil or flooding risks. We appreciate that the City Council is highlighting this issue. We are on it.”

The city also said HPD has financed the development or preservation of nearly 53,000 affordable homes for low-, moderate- and middle-income New York families—calling it progress toward the 200,000-unit goal of the mayor’s housing plan. 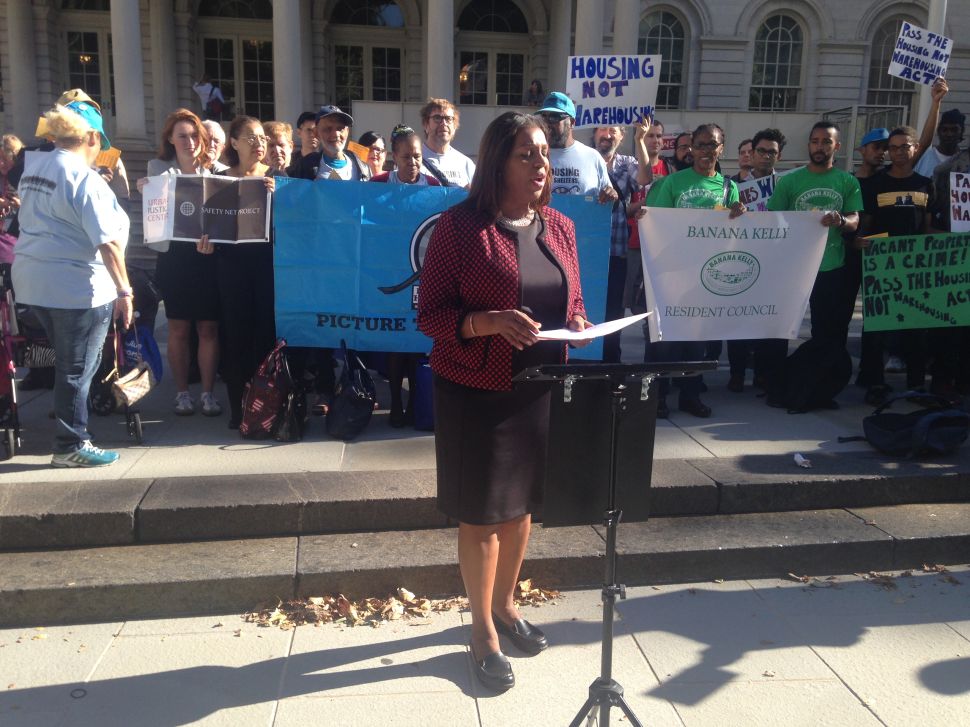