“Nikes,” the lead track and single off of Frank Ocean’s newest album, Blond, makes a strong claim right at the start. Ocean sits on the ground, his back leaning against a car straight off of the Furious 8 set, nursing a drink and forlornly telling the audience, “I got two versions” over and over. As he says this, the video itself goes split-screen, showing, what else, two versions of the same scene, yet neither able to move away from the bombed-out-on-the-ground-against-the-bumper Ocean, the two separated only by small differences in the way he tiredly gestures into the night. It’s a clear set up: Frank Ocean is here to talk about being split.

In psychotherapy, the sense of being split in two comes up extremely frequently, though that’s not to say it is any less a dramatic experience than what is being presented in “Nikes.” Splitting, essentially, is the feeling of having to be two things at once. Recent studies on multitasking make clear that we Humans aren’t quite capable of this, but we can come close to it by quickly compartmentalizing parts of ourselves on the fly to fit our context. Coming close isn’t what we’re after though: We want to be two people simultaneously, being one person and then a different variation of that person sequentially doesn’t cut it. As a result, we end up feeling all the alienation of having to present multiple faces to the world without managing to avoid the pain we went through these contortions in order to nullify in the first place.

By the end of the verse, both voices are asserting that they’re something special, in the sense that they are removed from the pack.

We see this play out in Ocean’s portrayal in his video of these two slightly different versions of himself. The track opens with him singing a solo duet, the result of two pitch-shifted vocal tracks playing to each other. Neither one is quite real, and while they seem to espouse different ideals they don’t, not really. The lines of the opening verse contrast each other—one voice coldly assessing a situation, the other emphatically judging it—but the takeaway is the same; by the end of the verse, both voices are asserting that they’re something special, in the sense that they are removed from the pack.

As the video goes on, these voices coalesce into form—one wearing a black T-shirt emblazoned with the text of Jenny Holzer’s Abuse of Power Comes as No Surprise, the other wearing a white glam outfit reminiscent of Prince and Freddy Mercury—but they remain intimately entwined. As one feels the pain of being set on fire, the other collapses, writhing, on stage. The split doesn’t work. Neither entity is protected from the pain of the other, and even worse can’t protect itself from the pain directed right at it. What seemed like a good idea for avoiding the horrors of the world proves to be an extremely temporary fix, and the two Franks end up right back where the singular one started, only doubled. 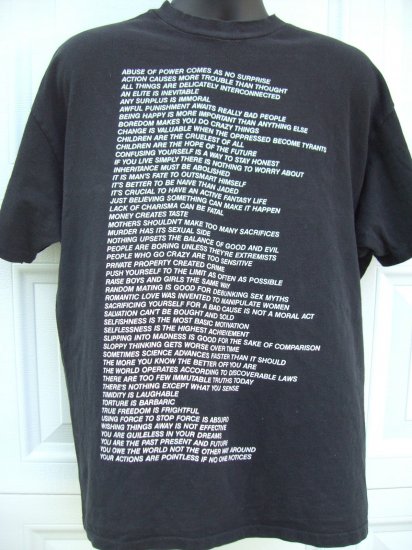 The video offers a number of reasons for why this may have occurred, and though it’s fun to speculate let’s keep in mind that this video, raw and honest as it may appear, is a fiction—leave the real Frank Ocean out of it. Sticking with the video, though, we see him wrestling with a series of events that seek to make him society’s Other. During a brief section of the second verse where he offers condolences to the dead, Ocean compares himself physically to Trayvon Martin, a boy killed seemingly only on account of his dark skin and outfit. The video also plays frequently with the notions of fluid gender and sexuality. The message is a clear one, the Frank Ocean of the video identifies with two groups unfairly and frequently targeted by socially endorsed violence; he is an Other in this world.

So what does it mean to be Othered? Put simply, it means that the rules of your society don’t apply to you and, perhaps more importantly, don’t apply to the members of that society with whom you interact. It opens you up to a kind of inescapable net of violence—you aren’t really protected by law, and you aren’t really supported by the institutions designed to help, so you can’t ever really escape. You are left to find your own society in the shadows of the world you live in. And we see this in the video: the only rules of the party are don’t take pictures of it. Don’t create evidence of your existence, leave no trail behind you when you leave the party to return to the world.

Put simply, this is not an easy way to live. You have no choice but to engage with a society that targets you, that wishes to destroy you, because you need what it offers. You need the roads, the electricity, the food, and a myriad of other things provided by it to survive. And this dual-role towards the world—oppressed, needful—leaves you in an emotional bind. It is very, very taxing to hate and fear a thing that you have no choice but to rely on. And to resolve this conflict, you begin to split.

Because we co-create the world we experience, we end up experiencing two worlds, neither of which feels like the real thing.

What ends up happening is a phenomenon called internalized oppression. Exhausted by maintaining two attitudes towards society, you end up convincing part of yourself that maybe society is right; maybe you really are bad enough to deserve the treatment you get. It’s an extremely common response to the trauma of being made into the Other for reasons far beyond your control. And while internalizing your oppression initially feels easier than declaring yourself, against the full weight of society, worthwhile, valuable and basically good, the cost ends up being far too high.

This is where the split usually starts, this is how one person becomes two—one of you loves yourself, the other one hates yourself. You can just look at that sentence and see how nullifying a a semantic proposition it is, before you even try to empathize with the experience. And nullified is the end result. The video is opulent beyond measure, a catalog of exciting events, beautiful people, expensive cars, and grade-A sex. But the emotional tone is entirely removed; Ocean seems utterly unconcerned and unmoved by any of it throughout.

This is the danger, of course, of being split: When you don’t know which one of you is real, you don’t know which desires are either. Because we co-create the world we experience, we end up experiencing two worlds, neither of which feels like the real thing. Perhaps this is why the lyrics seem to switch in the third verse to their focus on lighthearted, non-relational sex. Ocean isn’t currently available to feel good, but he’d be happy to make someone else feel that way.

And making someone else feel good, of many people dealing with a split, ends up feeling less nullified than their own experience. It’s an opportunity to borrow someone else’s nervous system for a moment. But it’s a poor substitute for actually feeling good yourself. But when you can’t feel yourself enough to know how to do that, to mean something to yourself, you find a measure of fulfillment by meaning something to someone else. You put your heart in their hands, you put your self into the care of a society that has nothing for you, and you hope it turns out ok. You must be careful though, as when someone else sets you on fire it can be tempting to see how long you can burn.