Four-and-a-half years after unarmed Bronx teen Ramarley Graham was fatally shot by a police officer, his mother is asking Mayor Bill de Blasio to meet a demand he made while public advocate—that there be a “fair, speedy and transparent investigation” into the circumstances surrounding the shooting.

The Wall Street Journal reported last week that the NYPD is getting ready to hold a disciplinary trial for Officer Richard Haste, the officer who shot and killed 18-year-old Ramarley Graham in February 2012 in the bathroom of his Bronx home in front of his sister and his grandmother.

Since the shooting, Haste has been placed on modified duty and was stripped of his gun and badge. Although he was initially charged with manslaughter, the charge was dropped.

One attendee held up a sign with a quote from a New York Times article in February 2012 in which then Public Advocate Bill de Blasio was quoted as saying, “Part of the healing process for the Graham family, and for the city as a whole, derives from a fair, speedy and transparent investigation. That work should begin immediately”—a comment Graham’s mother, Constance Malcolm, and elected officials and advocates in attendance referred to as proof the mayor did not make good on his promise.

Flanked by elected officials and advocates, Malcolm held back tears as she blasted the mayor, demanding answers and transparency about the circumstances surrounding her son’s death, including an investigation of the 12-plus officers on the scene. She also claimed that de Blasio and his wife, First Lady Chirlane McCray “would want the same the same answer” if it had been their son, Dante.

“First of all, I live in the Bronx. They don’t even sell the Wall Street Journal in the Bronx,” Malcolm said. “How would anybody in my neighborhood find out about this information. He’d rather call politicians or other people before he calls me. I felt that was a blatant disrespectful and he continues to disrespect my family and we’re not going to sit for this anymore.”

She also said she’d campaign for de Blasio’s current term to be his last term as mayor.

In a letter dated Feb. 1 to de Blasio and McCray, Malcolm and Graham’s father, Franclot Graham, asking them to remove Haste and the other officers involved in the crime from the Police Department and expressed concern about Haste receiving nearly $25,000 in pay raises since shooting Graham.

Malcolm sent a second letter April 12, this time to de Blasio and then Police Commissioner Bill Bratton reiterating the request but also requesting “a thorough and transparent investigation and accounting” of the facts and police misconduct.

She says the mayor has never called her and that she only received a phone call from Marco Carrion, commissioner of the Mayor’s Community Affairs Unit, who she said could not give her the information she requested.

“The mayor has not spoken with any of the involved parties so as to avoid prejudicing the process,” Austin Finan, a spokesman for the mayor’s office, said in an emailed statement. “The mayor supports Commissioner O’Neill’s decision to move forward with a department trial.”

The NYPD did not respond to a request for comment.

They told the caucus that the internal Police Department investigation has proceeded and that they are gathering up their sources and the people they need to testify and that the trial would start no later than November and have a decision by January.

He said the mayor and the NYPD “have all the trump cards against Haste,” the supervisors and the officers.

“According to their own Patrol Guide, if an officer engages in behavior that’s in violation of their own Patrol Guide, officers on the scene must stop that officer or they’re held accountable as well,” King said. “That’s the rule. Their own rule. So that means not only does Haste go down but all of those who acted in concert…they must go down as well.”

“They just said a month but that doesn’t say a date,” Malcolm said. “What I want is a date, because I want to be here. I want to know what’s going on, and if you can’t, you just give me a month, that’s not a complete, that’s incomplete.”

“I just want to be clear: the mayor made a promise to the BLAC that he would call Ramarley Graham’s mother,” Torres said. “He said he would personally call you.”

The request seeks disclosure concerning Haste’s shooting and killing of Graham on Feb. 2, 2012, the underlying circumstances, investigations into the shooting and the statements made to or by the NYPD to the media and prosecutors.

It also requests information about investigations, disciplinary actions and prosecutions undertaken or considered—including the leaking of confidential information to the media—as well as their outcomes, relevant NYPD procedures and practices, communications between the NYPD and City Hall and other agencies about Graham’s shooting or related investigations, disciplinary actions and prosecutions. 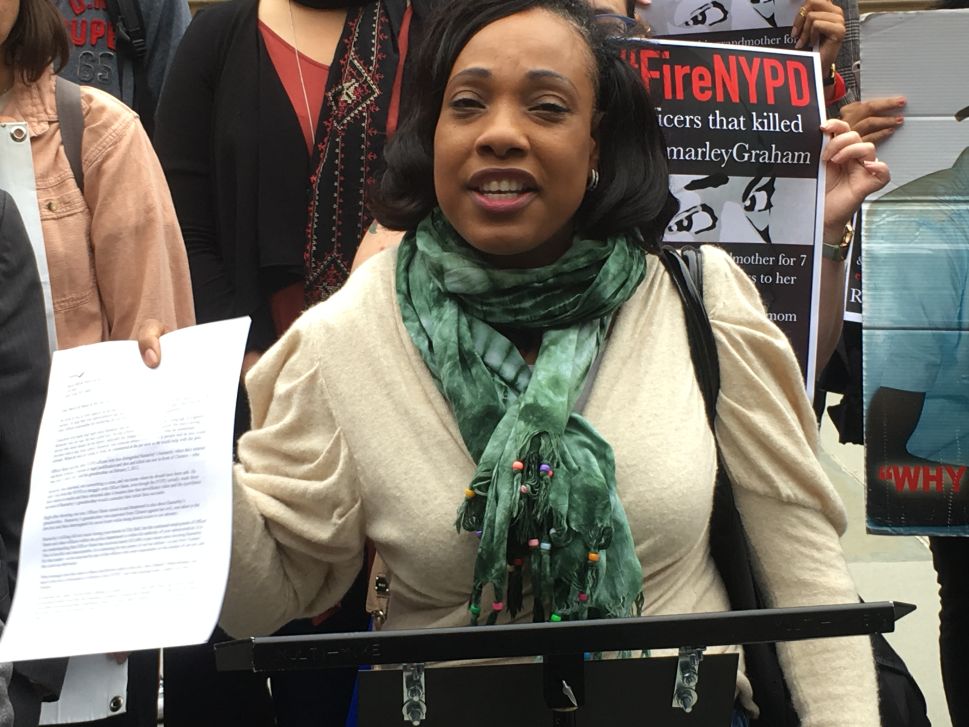