Well, that all worked out nice and neat, huh?

Last week, the question of the hour was “Is Ray Donovan good?” This week, it seems to be: Is Ray Donovan… God? What does that mean for him, and those he keeps close? What does that mean for people who get in the way? The entire premise of Ray Donovan is that he functions as a living, breathing deus-ex-machina, doling out free passes and mercy to people in serious jams. That function is fine on a storytelling level, but when you’re playing the long game with characters who have now had four years to develop, there needs to be something behind all those convoluted plans working out at the last minute. The show takes a few steps towards investigating Ray and breaking down the visage he’s able to throw over his clients (and himself) but at this point, it’s nowhere near enough.

Anyway, it’s finale time, baby! The big showdown between Hector Campos and Archie Whittaker is here, as is the one between Ray and Dmitri. First though, as is the custom for any family drama season finale, we open with a quasi-religious dream sequence, in which Ray gets an over-the-pants handie, sees his wife in a coffin, and gets leered at by Leland Orser. We’ve all had that one.

JK, Ray isn’t really in church, he’s in the police station. Still apprehended by Frank, who has a big ol’ file documenting everything Ray’s been up to since we’ve known him. If Ray doesn’t play ball and give Frank everything he wants on Dmitri, he’s going away for a long time, and ruining the lives of countless high-profile clients. I doubt anyone really cares about that second part. He and Sonia arrange a meeting with Dmitri, where Sonia works her way back into the family business, and Ray just wants it all to be over. Dmitri insists on ringside seats for the fight. Once Hector throws the fight and he gets his cash, it’ll all be over. Ray nods. Honestly, he would be more subtle if he’d rolled his eyes and yelled “YEAH RIIIIGHT”. Back home, Abby tells Ray her cancer’s disappearing. A miracle! He tells her everything’s over, and that they’re safe. She’s happy about the fresh start, and the two embrace, bound by their love for each other and also LIES.

Mickey heads to the art dealer, who makes the Kovistskys look like the goddamn royal family. Mickey is in deep cover, using all the right art-dealer-y lingo when he gives his reasons for selling the painting: “you know.. gotta make room on the walls for the… new shit.” The dealer offers him 10k, and stands firm until he sees the frame is packed with dugs, then immediately ups his offer to 50. NBD. Not suspicious at all. Is anyone on this show actually good at being a criminal?

Mickey shows Ray what was in the frame, and Ray calls for a family meeting, outlining a plan (that we don’t hear the details of) that’ll pin Dmitri and Make The Donovans Safe Again. He even involves Terry, who has put two and two together and worked out what hector did to Marisol, and that Ray’s forcing him to throw the fight. He shakes off the disappointment pretty quickly, though, just like he has his collapse, which I guess we’ll either get to next season or never follow up on. Neither would surprise me. Abby’s also in on the act, swiftly learning about and then forgiving Ray’s deceit. Seems to be a pattern emerging here.

Finally it’s FIGHT TIME, the big show this entire season has been leading to, and it’s… over very quickly. Ray tells Frank to go fuck himself re: wearing a wire, Hector wins the fight, and Dmitri all but tells Ray “K I’m gonna kill you ASAP”. Little does he know, his driver has been compromised by Darl and Avi, who kidnap Dmitri, take him to a remote parking lot in Anaheim, fill his car with the drugs from the guitar painting, and kill him. Once again: this is the fabled, untouchable Dmitri we’re talking about, who counted on one dumb driver as his protection at an event crawling with Donovans. Didn’t he have two bodyguards with him when he met with Ray and Lana just last week? Mickey and Bunchy meanwhile shoot up the Russians’ mansion, then head to the afterparty, neither of them the slightest bit affected by all that murder they just did, despite being haunted by the Bill Primm incident a few weeks back. I’m half convinced the writers don’t actually watch this show.

Which brings me to all this God stuff we deal with this week. For a finale, it’s a shockingly slow, serious episode. Ray Donovan is at its best when it’s firing on all comedic cylinders, acknowledging the inherently silly premise and cracking wise. It’s no coincidence the best episodes this season–the Piss Jar Roadtrip and the return of Ed Cochran–functioned as standalone capers. Outside of a couple of Mickey scenes,, the entire finale is steeped in seriousness, and it would be easier to accept this if… any of it had been even slightly hinted at before now. When was the last time we even saw the priest? When was the last time Ray’s faith, or his drinking, factored into anything? The reappearance of Father Romero only helps us realize how pointless it is to even care, since this show picks up and drops character traits at will. Is Ray Donovan God? Is he the devil? Depends on the week, TBH.

Some asides, this is the finale, after all:

– Nice of the “previously on Ray Donovan” segment to continually show us Belikov’s murder: perhaps the most brutal in recent memory.

– There’s a DOG who we haven’t seen in forever, and who factors into the plot more than Conor does. Maybe one of the writers cmd+f-ed “Conor” with “dog” this week just to mix things up. The dog gets fed by Mickey and then Abby lets him out to pee. We’ll probably never see it again, even if this show runs another ten seasons. Hell, maybe they’ll just get rid of the kids as well. Here’s how you do it: At the beginning of season 5, have Ray fall through an interdimensional wormhole and wake up in a universe where his kids were never born but also there’s 3 dogs. It would save us all a lot of time, though at least they sideline Bridget with a respectful “going off to college in New York” bit. Remember when Meadow went to college in The Sopranos? Of course you do. That’s everyone’s favorite bit.

– “Bridget got into NY-fuckin’-U” I swear, if Veep weren’t around, Ray Donovan would at least have the most creative swearing on TV.

– RIP Sonia, you were quite interesting, especially that time you blasted Ray with hallucinatory images and showed him your boobs.

– “I told you everything would work out, didn’t I? Don’t you ever fuckin’ doubt me again” I don’t think that’s really how it worked, Abby. 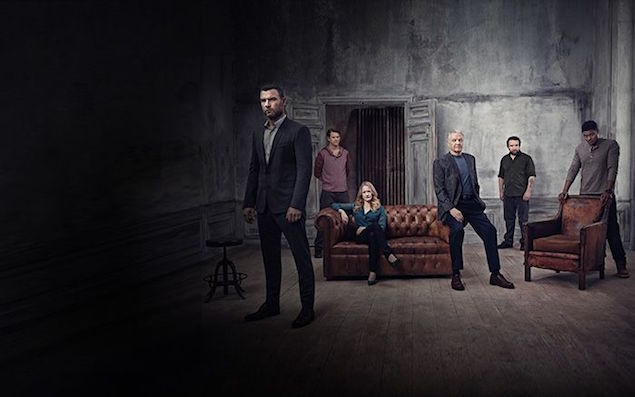