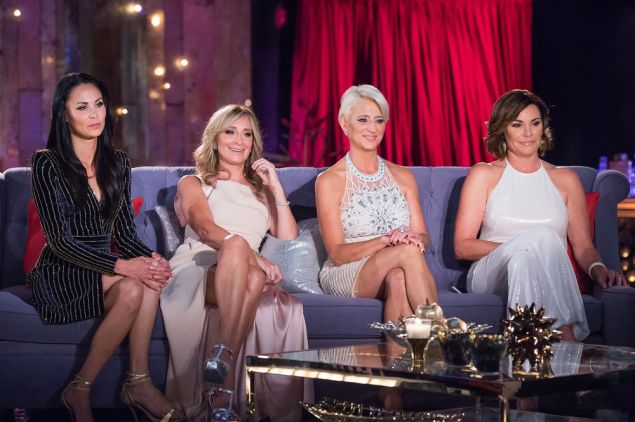 At last, we’ve arrived. It’s part three of the reunion. A time when we pretend like we’ve actually dealt with things. A time when the craziness comes to fruition, where the best of the drama is supposedly saved for last. And a time when Andy gets to finish sitting with these broads, throw back a shot or two, and mutter to himself, “There’s no place like home.”

But, surprisingly, this reunion actually felt like it had an ending, a sense that things were dealt with. True, not every issue got resolved. But Andy, for once, managed to be a good reunion host. He asked good questions. He allowed the women to tear each other apart when the moment called for it. He followed up when Ramona seemed like she had more incriminating information on Tom’s continuing infidelity. He even forced the ladies to conclude with their regrets for the season.

But before we got to the pretty ending tied up in a ww, we had to contend with the drama. And both Bethenny and Dorinda seemed so on edge, as if they were springs wound so tightly and ready to pounce. Bethenny was obviously unwell. The sickly pallor of her skin and her feverish eyes confirmed her illness before she mentioned, in an offhand manner, that she had strep throat. And so Bethenny was not her best last night (or really any part of the reunion). Normally Bethenny can hide her harshness under a blanket of humor. But she could barely muster up the energy and instead sounded so angry, that her barbs were sharper than she intended. I will always love me some Bethenny, and she pretty much came out smelling like roses after the stunts pulled by Lie-Ann and Dorinda Meddler. But she was so tense during the reunion, that it was difficult and uncomfortable to watch.

As for Dorinda, her aggressiveness felt unwarranted. And while Bethenny could blame her off-night on illness, Dorinda’s behavior seemed almost unexplainable.

She called Sonja a “stupid idiot” for daring to call Madame Paulette a dry cleaners (um, hate to break it to you, as wonderful as Madame Paulette’s is, it’s still a glorified dry cleaning institution). She yelled at Bethenny for “overreacting” to Sonja’s business name. She yelled at Sonja for calling Dorinda out on her condescending behavior toward Sonja. Bookended to these rants, Dorinda had on the fake, wide Heather-smile. The kind of smile that made you want to punch someone’s teeth out.

In her attempt to justify her actions, to show that she acted out of love, Dorinda continued to degrade Sonja. Sure, Sonja was quick to forgive Bethenny, and yes, it may seem a bit ridiculous after the horrendous treatment Sonja received from Bethenny. But that doesn’t make her delusional. Unfortunately, Dorinda doesn’t quite understand the definition of delusional. And she, like Lie-Ann last episode, wields it like a weapon—one that she can pretend to dull it with her supposed compassion.

Like the supposed compassion she showed by uninviting Sonja to the Berkshires. Yes, it was one night. And, in the scheme of things, it’s not a big deal. But let’s get real for a second—the very fact that everyone knew it was going to be a shitshow, a guaranteed multi-episode event, where every fight and every bit of drama would be filmed.

When viewed through that lens, her near-walkout and rivers of tears makes sense. She felt not only excluded, but edged out of her status as a Real Housewife, an important stream of income. And as Dorinda—stubborn, willfull Dorinda—dug in her heels and remained firm that she did not regret inviting her to the Berkshires, Sonja lost it. Her voice broke. Her eyes welled up. She declared that she was done with the show. She was halfway to stage left when the other women finally managed to convince her to sit down again. Sonja’s feelings were again bottled up and tossed aside, in favor of “moving on” to discuss important things like the trip to Miami.

I found it very interesting, when Andy asked Dorinda about why she told Bethenny to look in the mirror when Bethenny said that Dorinda brow-beats and forces her friends to do things (specifically regarding Ramona and Dorinda’s anger over her doing something else). This was her response: “I don’t brow-beat people. I think Bethenny brow-beats people. She calls them names. She’s terse with them. She makes them feel uncomfortable sometimes.” But all of that can easily be applied to Dorinda, just in last night’s episode. She called Sonja names. She was terse with Sonja, and Bethenny and Ramona for good measure. She made Sonja so upset as to make her cry. I’m pretty sure that Dorinda unintentionally described herself. And disproved her assertion about herself. And it was beautiful.

And it’s then that I realized: Dorinda cannot handle criticism. If it’s in good fun, she’ll have a laugh. But later, once she’s had time to digest and think it over, she will begin to obsess and get upset that people would say such things. She believes in a carefully constructed persona of herself—the voice of reason, the mama bear, the alpha of the group (note her sour face when Jules gives that title to Bethenny). And these accusations that she’s a shit-stirrer, that she doesn’t actually care for her friends, and that she can be a coldhearted bitch does not sit well with her. To her, she’s empathetic and loving.

But she has a self-importance about her. She knows what’s best for Sonja, she is the only one who could reveal sensitive information, she should be the leader of the group. But it’s that self-importance, in light of her shady party behavior, that holds her back from truly becoming a star. Because, as Bethenny has shown so beautifully over the years as a housewife, the best path to becoming a star is owning your shit. And Dorinda doesn’t own her shit.

But Bethenny, despite her illness, does, and continuously admits to fault, except for one thing: how she revealed the photo of Tom to Lie-Ann. I do think the way she went about the “Tom-Bomb” was sloppy and unnecessarily drawn out. As Bethenny said, there was no right way to handle it. The information, no matter how it was revealed, would be a blow to Lie-Ann’s carefully constructed reality. However, it wasn’t something that had to be revealed on-camera. And, if it had been anyone else’s husband or fiancé I would agree that it shouldn’t have been revealed to the audience. But this is Lie-Ann, the woman who has acted like a moony-eyed teenager over a fame-whore bald guy. And the bearer of bad news was Bethenny, who has had eight years’ worth of bad blood between her and Lie-Ann.

But Ramona—that crazy-eyed, Ramonacoaster—despite her literal rollercoaster of a relationship with Lie-Ann, and the anti-climactic reveal that she was originally supposed to do the “Tipsy Girl” wine line, turned out to be the most empathetic of all. It was clear in the way she kept asking, “would you really want to know?” that she knew something scandalous about Tom. And, in one of the few instances where Andy Cohen sucked as a host last night, he didn’t push Ramona to say what it was. If it’s something that Ramona planned to reveal off-camera to Lie-Ann at the end of the night, then deserves all the respect in the world. But hopefully Lie-Ann’s reaction will guarantee that Ramona will reveal what she knows next season.

To the end, Lie-Ann cannot stop lying. Her marriage was an open marriage. But, with the help of a few bends to the truth, now apparently Lie-Ann was, in her own mind, separated from the Count when he asked for an open marriage.

Lie-Ann’s lying and defensiveness over the way Bethenny acted was enough to make Bethenny stand up as if to leave (especially after Dorinda’s dance and pony show of aggressiveness and defensiveness) as Lie-Ann threw out platitudes about the beauty of her relationship as Bethenny tried to explain herself. Because Bethenny knows that Lie-Ann’s relationship with Tom is faker than Ramona’s boobs. Watching a vignette of Lie-Ann’s engagement yacht party, Lie-Ann’s interactions with Tom seemed so forced, like a bad actress trying to feign excitement. It’s something in the uptalk, in the way she had to force a squeal out of her every time she said Tom’s name, or that she was getting married, or that she was in love. And when Andy asked what she loved about Tom, she seemed to freeze for a moment, as if she had been called on in class when she had spent most of it sleeping, and then proceeded to list some superficial assets.

And then, the reunion was nearly over. Andy Cohen, who for once had complete mediating control over these women, decided to end with everyone stating their regrets for the season. It was, in a way therapeutic. By forcing everyone to say their regrets, it allowed it to end on a good note. Everyone’s answer was pretty self aware—Carole realizing that she needs to nip things in the bud, Bethenny realizing that she shouldn’t be so aggressive—except for Lie-Ann who was, predictably, regretful that she had that fight with Tom that led to his make-out sesh.

And with that, the reunion was wrapped up in a bow, a positive ending to a whirlwind season. True, the positivity and group hug (which Bethenny couldn’t join, sitting forlornly on the couch as the women embraced) were likely fake. But, in a lot of ways, it’s an illusory resolution that mimics real life. In the real world, things don’t get resolved and wrapped up in a beautiful bow. You will always hate that one co-worker, that one parent in PTA, or that frenemy you see at community events. Even if things get resolved, those people won’t change the essence of what makes you dislike them. And that���s ok. Being fake isn’t always so bad. Especially if it helps you get through the day. 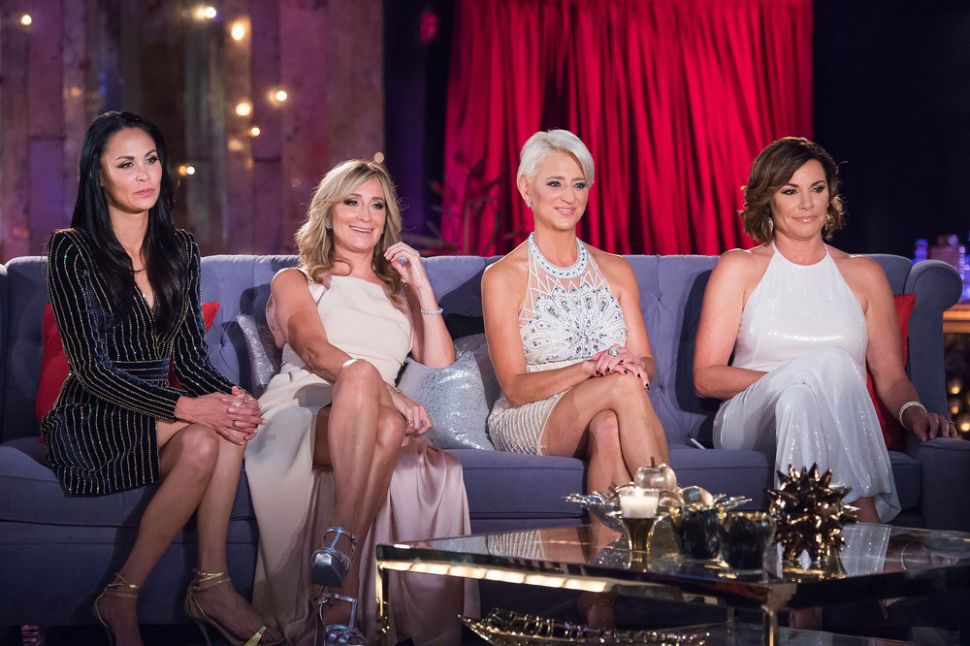