Reunions are like a courtroom deposition. Evidence is gathered, discovery is done, and attempts are made to vilify and undermine the opponent’s credibility. And, as Part II of the reunion demonstrates, Ramona is a master litigator.

When Luann continues to deny that Ramona went on a few dates, Ramona whipped out her phone, showing Luann and Andy the heart Tom drew on her hand on one of their later dates. When Luann denied that she knew Ramona dated Tom when she chased after him, Ramona reached deep into the couch cushions and pulled out articles that Tom planted about him dating Ramona (that Luann showed Ramona in the first place). After Luann claimed momentary loss of memory, Ramona retorted that Luann mentioned the article when they went up to the Berkshires and Luann and Bethenny had that blow-out fight.

Ramona has become somewhat likable this season for one simple reason: she is on the “right” side of season 8, and the “right” side of the couch. But her likability is also due to the way she genuinely cares about her castmates. She went out of her way to help Bethenny and Jules in their time of need. And this capacity to care, to be there for others, to give of herself is what allows people to forgive her ridiculous, often obnoxious behavior.

Last week, after my scathing critique of Luann’s behavior, a lot of people called me out on my hatred of her, saying my bias pulled down the entire recap. But I believe that it was warranted. Luann represents everything that’s wrong with the Real Housewives franchise. She is the embodiment of a narcissist, and will do everything she can to pretend her shit doesn’t stink. The reality television machine thrives off of drama and ridiculous antics, but it also thrives off of redemption arcs and “happily ever after.” It’s a formula that, as much as it pains me to admit, the Kardashians do well. It’s why Sonja has become such a pleasure to watch evolve this season – this is her redemption season and it’s a compelling story.

But Luann is so self-involved, so delusional, that she has become unbearable to watch. She made nearly every discussion at the reunion about her. And when it couldn’t be about her, she would roll her eyes, or point out other’s foibles. This whole second part of the reunion, all we get is a delusional Lie-Ann. Even when presented with the truth – that Tom lied – she obfuscates, shrugs her shoulders, deflects. Forget about Luann, Lulu, and Countess Crackerjacks. Bethenny came up with the perfect name for Luann, that encapsulates everything that is wrong with her: Lie-Ann. And so, I declare that Luann shall forevermore (or, at least, until next week) be called Lie-Ann.

Lie-Ann uses Sonja’s naiveté against her. In an effort to pull a Dorinda and take the heat off of herself, Lie-Ann put Sonja’s feet to the coals. Whenever the topic of Tom and Sonja’s alleged relationship came up, Lie-Ann would whisper under her breath, “delusional,” and occasionally make hand gestures indicating that she thought Sonja was crazy.

In total, Lie-Ann called Sonja “delusional” four times. And it looks like next week, Lie-Ann will do so a few more times. Ah, Lie-Ann playing the delusional card. That’s rich. Sorry Lie-Ann, that ship has sailed like fifteen episodes ago. Sonja is a reformed gal, a woman who spent the latter half of the season truly getting in touch with herself. Had Sonja continued to be a floozy, boozy Housewife, Lie-Ann could have succeeded in tearing apart Sonja’s reliability. But instead, Lie-Ann just looks like an asshole and a terrible friend.

But as disgusting as Lie-Ann got with Sonja, even as Lie-Ann nearly brought Sonja to tears, Sonja forgave her, nearly instantly, when Lie-Ann wished her well. It takes so little for Sonja to forgive Lie-Ann, because Sonja does value their friendship. And when Lie-Ann goes after her, Sonja is bewildered, whispering to Jules, “I don’t understand.” Because she still doesn’t understand that Lie-Ann isn’t a friend – she is a user, a person who befriends those she thinks she can take advantage of.

And so seeing Lie-Ann get called out by Bethenny on her lies isn’t just fun, it’s immensely gratifying. But Bethenny doesn’t come out of Part II looking so great. Bethenny is arguably the queen of the Housewives. She is exceedingly honest, using her acerbic wit to call out bullshit. That honesty helped grow an empire and has garnered her legions of fans. But that honesty can also make her unlikeable, especially if her target is someone that the audience has grown to like. And her attack on Jules last night fell into the latter category.

Bethenny isn’t wrong. Jules made a terrible impression in the beginning. Jules did stupid things, was obnoxious and condescending to the “help” and was overall incompetent. She was a spoiled, Jewish American Princess, who also happened to be Japanese (and mentioning it every other second lest anyone forget it).

And it can be argued that her antics were a bad representation of Judaism. Jules has a fundamental misunderstanding of what constitutes Jewish law, thinking that merely touching shrimp means she’s going to hell (spoiler: it doesn’t). But a lot of her ridiculous behavior tied to her status as a Jew or her eating disorder was her attempt at being funny.

Jules’s problem is that she has terrible communication skills. And it makes it easy to misunderstand her. So her jokes fall flat, her goofiness translates into incompetency, and her feelings get trampled on by her unsympathetic colleagues.

I agree with Bethenny – Jules has presented herself pretty terribly. But she is still an empathetic character, a person who is open about her struggles, who is still a nice, sweet person. She has also gone through a lot. She is getting divorced, her husband cheated on her, and she struggles with an eating disorder. And when she discusses these struggles, her vulnerability makes her relatable. Just as Sonja became an empathetic character when she dropped her delusions of grandeur, so too did Jules. Perhaps Lie-Ann should take some notes.

In any case, when Bethenny is unnervingly honest about Jules, I’m left cringing, feeling empathy for Jules and imagining the face of Regina George superimposed on Bethenny’s body. With Jules, Bethenny’s unrepentant honesty backfires, revealing Bethenny’s darker, caustic side.

Luckily (or, unluckily), Jules had an ally in the form of Dorinda. But Dorinda has become more and more like her bestie Lie-Ann, and her support of Jules is as self-serving as Lie-Ann’s relationship with Sonja. By protecting Jules, Dorinda can seem like a savior, redeeming herself from Bethenny’s characterization of her as being the “Meddler.”

Dorinda tried so hard to make it look as if her “meddling” had good intentions, even as there is ample evidence that proves otherwise. And after watching a montage of her meddling and stirring the pot, Dorinda declared that she will never meddle again. Bullshit. Dorinda will always meddle. Look how far it got her – camera time and the second seat on the reunion couch. It’s only her second year on this show, and she has already moved up the hierarchy. Had Lie-Ann not reverted back to evil Countess, she would have had the prime seat on the couch, especially with all the Slimy Johnny drama.

Dorinda also continued to find things about Carole to get offended about. Carole made a joke to Bethenny about Dorinda’s house being haunted by Dorinda’s dead husband. And while the joke may have been in poor taste, it wasn’t such a terrible comment. It certainly didn’t deserve a five-minute rant by Dorinda over what a horrible person Carole is for saying it. I, for one, do not believe that Dorinda actually cared that Carole said anything. Dorinda’s body language, with her refusal to make eye contact, said it all: she was lying. Why? To create drama for the sake of camera time. Dorinda is a famewhore.

Speaking of famewhores, last night’s episode made it clear that Tom wanted to be famous. It’s why he dated Ramona and planted stories of himself while dating her. It’s why he jumped at the chance to date Lie-Ann. Not to get really cynical, but I believe that this was his plan the whole time. Back in the first season of this show, he tried to flirt with Ramona and her friends on-camera, agreeing to be filmed. And once Ramona was free from Mario, he pursued her, assuming she would be his ticket to fame. But Ramona didn’t see him as more than a passing fling, and his desire to splash their relationship all over the tabloids made her uncomfortable, so she broke up with him.

But Lie-Ann was the perfect target. Desperate and delusional, she was the perfect patsy, as she would do anything to be with a seemingly rich, successful man. Except, it turned out she wasn’t a patsy, and she became complicit in Tom’s rise to fame. And it’s why, even though I still firmly believe that Lie-Ann will never marry and give up her title, they will be together for a very, very long time.

Next week is the conclusion of the reunion, and something happens to Sonja, causing her to snap and walk off-set. It should be interesting, so stay tuned. 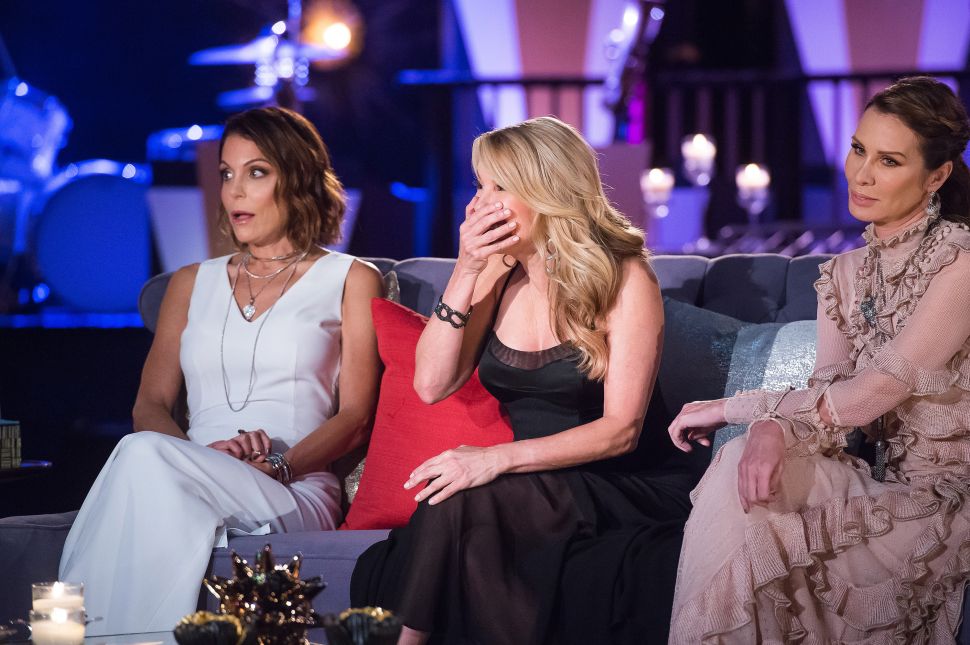