Polaroids, as irreproducible souvenirs of a particular moment, might seem like natural nostalgia inducers. Artist Paul Caranicas isn’t so sure. “I feel nostalgic about them,” he says. But—“I’m not sure how other people feel. They must think it’s strange…If you don’t know what the technology was like back then, it’s hard to imagine why these things were important…Like the telephone. It used to have a cord, and it sat in one spot, and it rang. And now…”

Jerry Kajpust, who works in external relations at the Leslie Lohman Museum of Gay and Lesbian Art, called Polaroids “a precursor to our modern day selfie.”

“You didn’t need to go to a dark room or photo processing lab for the image to be useable or viewable,” he said via email. Since no middleman is needed to develop the film, “photos could be somewhat edgier than normal, since there wasn’t anyone to censor the final image.” Unlike sex tapes and sexts, there was no way to leak these to the masses, either. Ah, the days before cell phone cameras—must certainly inspire nostalgia for Carlos Danger.

There’s also a unique anticipation in the moments after a Polaroid’s been shot and before it develops. Polaroids resist the easy, instant gratification of a digital camera but allow for quicker pleasure than a roll of film. Photographer and subject stand together, watching the image develop. The resulting forms are never a surprise, though unexpected details may appear. Without other cameras’ ability to focus, the photographer relinquishes control of the final work—one that often becomes a memento of a special event.

From September 9 to 11, the Leslie Lohman Museum and El Museo del Barrio will collaborate in paying homage to both the Polaroid and the legacy of iconic fashion illustrator Antonio Lopez, with Caranicas’s help. “Antonio Lopez: A Photo Cocktail Party,” at the museum’s Prince Street project, will feature Polaroids taken back in 1979, during the first “Photo Cocktail Party” at the old Robert Freidus Gallery on Lafayette Street. Coordinated by Juan Ramos, Caranicas’ former partner and Lopez’s collaborator, the party united the most stylish guests of the era, including Grace Jones and Jean-Paul Goude. Throughout the evening, a technician and photographer took their pictures in an 8×10 Polaroid format. The hosts mounted these images on the gallery wall, where they remained for a week. Since then, Caranicas has been sitting on the cache. He now oversees the full Antonio Lopez estate.

When I spoke to Caranicas in August, he was in the process of scanning the old images—he didn’t want to mount the original, irreplaceable objects themselves. They were funny, he said, because of the color. “It’s very vivid but it also tends to be very cold…It’s more greenish…the people therefore look very pale but also very, kind of very alive. It’s strange. You have to see them to understand.”

Caranicas attended the original party, though he says he barely remembers it. “I mean…it’s almost 40 years ago!” he says. “I can tell you generalities and I can tell you how it came about, I can tell you what the atmosphere was like. I can’t tell you specifics.” For those, you might need to look at the images themselves and the hints of emotions, fashion, and characters that emerge.

He does recall a particularly evocative scene. In the back of the gallery, Antonio Lopez was shooting Polavision film. “He made some short films of two models that he had with him, in the bathtub,” he says. Back in August, Caranicas was trying to arrange for these to play on a loop during the upcoming party.

Another detail yet to be determined was whether to use a Polaroid or digital camera for the evening of September 9. The organizers plan to take guests’ pictures and mount them on the wall, a recreation of the activity at the 1979 party. Caranicas’ niece, Devon Caranicas (who also works in development at El Museo), weighed the options. “Do we give up the instantaneous reaction of having this image that just exists in and of itself, that we put on the walls but in a much smaller format,” she wondered, “or do we retain the 8×10?” The original technology is impossible to use again. Their goal, she said, is to recreate as much as possible the aesthetics of the 1979 evening. More recently, the team confirmed they’d decided to use a Polaroid Sun 660 camera. Long live the Polaroid.

Devon Caranicas is a photographer herself but she’s never made the transition to digital. “I just can’t do it. To me, images and photography are so tied to memory and place and feeling and that is something that I think can only truly, really be captured in film.” Memory and place, of course, are what the upcoming celebration is about too.

The conceit of the 1979 party itself contained an element of nostalgia. In Juan Ramos’s proposal, he wrote, “This concept combines two fashionable events of the past: the traditional cocktail party and the ‘happenings’ of the sixties.” Both 1979 and 2016 fetes are, in their own way, celebrations of bygone eras. This time around, Facebook will invite guests. Instagram will memorialize the party. Let’s hope, though, for more of that original spirit of subversive celebration and creativity. And more models in bathtubs. 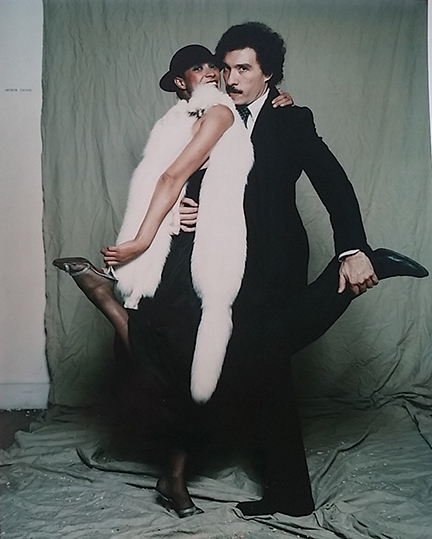