It was a fitting ending for a City Council hearing that was, at its heart, about failures to communicate: another miscommunication.

After two-and-a-half hours of questioning Deputy Mayor Anthony Shorris about the city’s decision to lift a deed restriction on Rivington House, which paved the way for the AIDS hospice to be sold for profit to luxury condo developers, his testimony ended with the City Council accusing the mayor’s office of misleading them about Shorris’ schedule.

“The administration misled the Council and the Speakers Office into believing that First Deputy Mayor Shorris’ availability for the hearing this morning would be limited because of events related to the U.S Conference of Mayors in Oklahoma City. This turned out to be false,” Eric Koch, a spokesman for Council Speaker Melissa Mark-Viverito. “At a hearing which focused on government honesty and transparency this is particularly shocking  and unacceptable.”

The miscommunication today played out in “real-time,” as City Councilman Ben Kallos, the chairman of the committee on governmental operations put it, when, during the hearing, he asked Shorris why he had to leave—”for the record.”

“I have appointments scheduled,” Shorris responded.

It obviously was not the answer Kallos was expecting. Earlier in the hearing, he’d referenced a plane Shorris needed to catch. “What was represented to us was that you have to attend the Conference of Mayors in Oklahoma,” Kallos said. Mayor Bill de Blasio is heading to that conference today.

“That is actually quite distributing,” Kallos responded. “And we deal with that later. I was under the expression that you had to be in Oklahoma and that is the only reason why I agreed to only two and a half hours.”

But the de Blasio administration is insisting that it’s the City Council that’s spreading “false” information.

“Ben Kallos said the administration said Tony Shorris would be going to Oklahoma. That’s false. The Administration has always been crystal clear that Tony Shorris’ time today was limited due to his role as acting Mayor in New York City during Mayor de Blasio’s short trip to Oklahoma,” spokesman Eric Phillips said. “Mr. Shorris testified for two and one-half hours, answering dozens of questions on this matter. The Council owes Tony Shorris an apology.”

Phillips showed the Observer (and other news outlets) an e-mail exchange between the City Council’s chief of staff, Ramon Martinez, and de Blasio aide Emma Wolfe. In it, Martinez asks if Shorris is traveling with the mayor today. Wolfe responds he is not.

The exchange happened at about 9:15 this morning, just about 15 minutes before the hearing began. Negotiations over the hearing have been ongoing for weeks.

“The hearing speaks for itself,” Kallos told the Observer. “Throughout the hearing I was referencing that we had him for 2.5 hours. I opened the hearing with a reference with him having a plane to catch.”

Kallos said he stood by the speaker’s office—which stood by its statement and from whom an apology to Shorris did not seem to be forthcoming.

Before it devolved into dueling statements from two spokesmen named Eric, the hearing focused on the lifting of the deed restriction in exchange for a $16 million payment to the city from developer the Allure Group—which the city says had promised to operate the former nonprofit nursing home as a for-profit nursing home. But in addition to a restriction requiring the property to be run by a nonprofit, the city also lifted the restriction requiring it to remain a healthcare facility—and Allure then flipped the property to condo developers for a $70 million profit. The sale and the fallout around it, including the administration’s refusal at first to hand over documents to investigators, has been a debacle for the de Blasio administration.

“This outcome is one for which I am ultimately accountable,” Shorris said today. “All I can say is I am very disappointed in what happened.”

As he has earlier, Shorris took the blame at today’s hearing—repeatedly insisting the buck stopped with him, not the Department of Citywide Administrative Services, which handled the removal. Information about the deed restriction was sent to Shorris, who oversees 30 city agencies and offices, in e-mails he has said he did not read.

“The story of the day is that the public now gets to see what happened: that Tony Shorris is managing 30 agencies, that he’s not reading memos, that he’s not giving directives to commissioners himself, that he’s relying on staff to do so even though he knows staff didn’t do so in the wake of Rivington,” Kallos told the Observer. “What seals the deal at the end of the day is that there are even communications issues relating to his testimony today.”

No one has been disciplined for the deed restriction debacle. But Stacey Cumberbatch, who was commissioner of DCAS at the time, left the agency shortly after the snafu hit the papers for a gig at Health + Hospitals, where she did not stay long.

Shorris was repeatedly asked if he suggested she take that job. He never quite answered.

“She had a position that she found at HHC,” he said, “and I approved her move.” 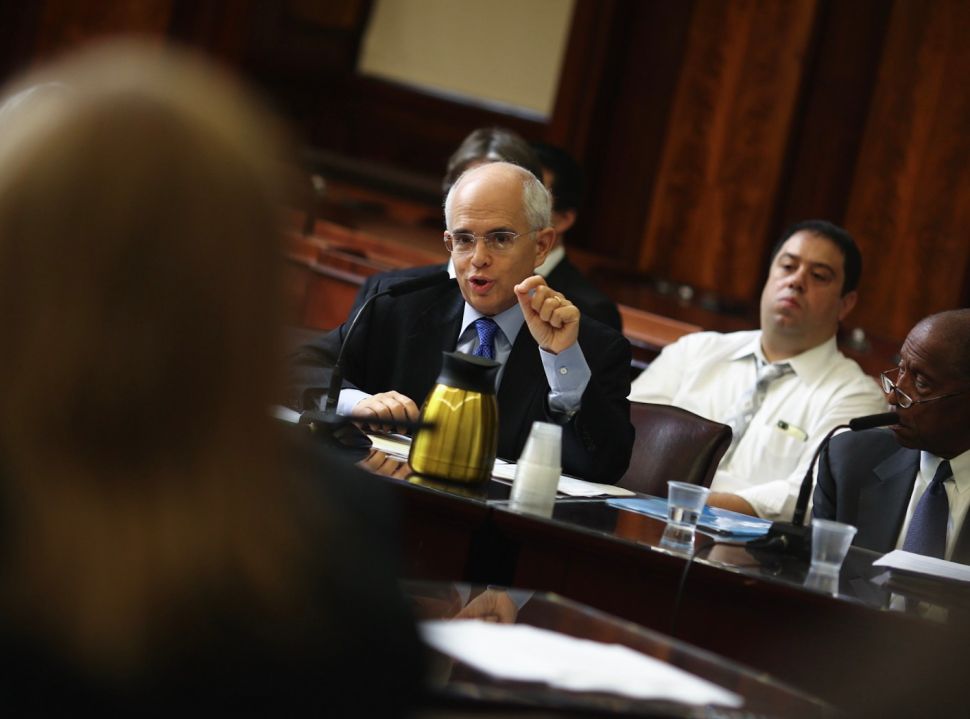