If there’s a reason the newest episode of Scream Queens looks familiar—well, it’s because it is. The season two opener begins very much the same way the first season did: negligent partygoers, distracted by revelry, leave someone to die. In this case, it’s a deathly ill patient, thrown into a murky swamp by a doctor and nurse that couldn’t be bothered to treat him during a hospital’s annual Halloween bash.

So yes. This is almost, play by play, the exact opener from last scene. However, season two feels just slightly stronger than the previous semi–disaster of a season last year. The jokes landed more frequently (that is to say, they land at all). The show still feels like some wonderful, gigantic catastrophe, make no mistake. Its tone is scattered, its acting is inconsistent at best, and its plot and character arcs are too absurd to be taken seriously. But the season premiere still feels hopeful, even if it is just a little bit. The writing, truly, does seem better. And John Stamos! That’s something, right?

Maybe the trick to Scream Queens is to not take it too seriously. The newest villain, after all, is named the Green Meanie. Like the Red Devil from last season, just a different color, and vaguely less threatening sounding. Oh boy. Here we go.

Thirty–one years after the hospital leaves a patient to die, the space is taken over by Dean Munsch (Jaime Lee Curtis), or rather, Dr. Dean Munsch. Having gained fame after writing an enormously successful feminist novel (yes, really), Munsch decides to dedicate her tremendous funds to founding a hospital, built to cure incurable diseases, aptly named CURE.

Munsch goes about recruiting the finest talent in the nation—in other words, two outrageously good looking doctors. Dr. Brock Holt (John Stamos) and Dr. Cassidy Cascade (Taylor Lautner) head the staff, mostly using their time to walk around halls in unison and marvel at how good looking they are. After a freak accident, Dr. Holt was left without one of his hands, which was later reattached, allowing him to be a surgeon once more. In other words, John Stamos just became the world’s most disappointing Jon Hamm impersonator.

Not much of Mr. Lautner’s character is known yet, but it is confirmed that he is very, very cold. As in, physically cold. As in, a full thirty seconds of dialogue was dedicated to discussing his body temperature. It would be unfair to be confused, however, because I’m pretty sure there was an entire Twilight movie exploring Mr. Lautner’s body heat as a werewolf.

Munsch also seeks out Zayday (Keke Palmer), enticing her with an offer of free medical school and training. To Zayday’s disappointment, however, Munsch also hires the Chanels. Recently released from prison after Hester (Lea Michele) mistakenly confesses to the murders, the Chanels struggle against their wicked reputation, earned after a hugely successful Netflix documentary about their case. Desperate for a fresh start, the girls head to the hospital, where they too are promised admission to medical school, which isn’t how medical school works, but it’s fine, everything’s fine.

The Chanels quickly run afoul of Ingrid Hoffel (Kirstie Alley), a nasty hospital administrator hell bent on making the Chanels miserable. Here I thought John Stamos was there for the throwback, and then Ryan Murphy tosses us Kirstie Alley. He never fails to please (and disappoint, in equal measures).

While bathing alongside a patient in a hydrotherapy tub, Chanel #5 (Abigail Breslin) witnesses the death of the newly recuperated patient (Cecily Strong)—beheaded by Green Meanie.

And as for some preliminary guesses about the Green Meanie’s identity? The dead patient’s wife was very pregnant, and if the first season of Scream Queens taught us anything, it’s to never rule out infants. Dr. Holt has a murderous hand and a creepy tattoo, which is as homicidal an indication as any. And Dr. Cascade is just really, really cold. 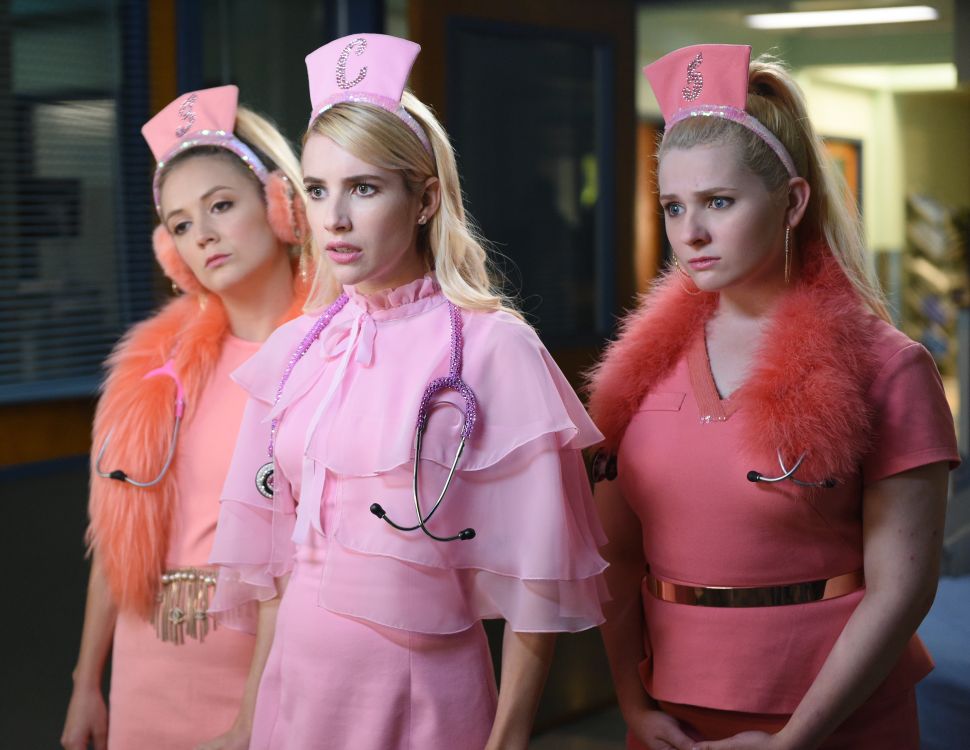