It’s the 40th anniversary of the National Dance Institute and heading into the fifth anniversary of their move to Harlem, on 147th Street, when I come to visit. This unlikely home will insulate the nonprofit organization, which provides free dance instruction to New York City kids, from the looming, ever-encroaching threat to institutions here: real estate prices. But when I meet with NDI director Jacques D’Amboise—who, for those not around when Neoclassical American ballet was in its heyday, was the Benjamin Millepied of his time, but perhaps a touch more masculine—he wants to recite ancient Persian poetry, give me books he thinks I should read and talk about the flaws in traditional academic pedagogy plaguing American education.

D’Amboise, 82, has probably never done a single thing half-assed. But if someone else did, he would probably be ok with it. Especially if it taught us something about the nature of half-assery. Such is his all consuming thirst and appreciation for others, whatever their perspective may be.

“Everyone should dance,” he says. But he doesn’t necessarily mean ballet.

D’Amboise’s arc—from Washington Heights childhood to MacArthur fellow and recipient of the National Medal of the Arts—would seem too crafted if it were fiction. When he was young, he had to watch his sister’s ballet classes because it was the only way to keep him from becoming involved with local gangs that recruited kids as lookouts while they stole cars. His mother knitted hats and scarves at home to pay for his sister’s lessons, due to her strong belief that children should learn to dance and play music. Their teacher, desperate for boy dancers—as ballet teachers always are—convinced him to try some steps, before quickly offering him free lessons. The teacher later admitted he and his sister were too talented for her classes and sent them off to the then-fledgling School of American Ballet, which would eventually produce most of the 20th century’s best ballet dancers.

Meanwhile, D’Amboise’s older brother served in World War II and came back traumatized, after fighting in Okinawa. “I remember dropping a fork off the table and him jumping up and screaming because of the clatter,” D’Amboise says. This left him acutely aware that his life in the arts was the type of gift he couldn’t waste, even now.

From the beginning of his career, he stood out, quickly rising to the top of the then-new New York City Ballet and creating some of the most iconic roles for men there, perhaps most notably as Apollo in the eponymous ballet. His athleticism was perfect for the golden age of American ballet that was in full swing by the 1960s, when he partnered the likes of Suzanne Farrell and Patricia McBride and served as ballet legend George Balanchine’s most stalwartly spectacular—if that could be a thing—danseur. D’Amboise danced forever, too (for a dancer, at least), only concluding his career on the stage at age 50.

He retired only because he noticed he was no longer cast in some of the virtuoso roles where he had made his name. “I couldn’t jump as high,” he says. But he was always able to choose roles and how much he would dance at NYCB, and that—the utter lack of restriction—was a gift from Balanchine that he values almost as much as the gift of being spared fighting in a war when he was young.

“Balanchine let me do anything I want. The other dancers used to complain…I’d go to Balanchine and say, ‘I’m going to do a movie, I won’t be here for three months’…I never asked him,” D’Amboise says. His freedom was such that his wife had to point out to him that not everyone was treated thusly. It wasn’t until after Balanchine’s death, in 1983, that he learned that actually his unilateral way sometimes angered the great choreographer. “All that time Balanchine came in and he would complain about you,” D’Amboise says Betty Cage, the legendary company manager, eventually told him. But Balanchine never interfered because, he said, according to Cage, Balanchine did not want to create a situation where “the patriarch is telling the son ‘you must do this.’ “

Most principal dancers, when they retire, go on to other glamorous dance pursuits. Farrell now runs her own company; Peter Martins, D’Amboise’s successor as NYCB’s premiere male lead, now runs that company; Mikhail Baryshnikov operates the White Oak Dance Project, an experimental dance company. Even those who don’t helm prestigious organizations often teach at them, or help stage ballets all over the world.

D’Amboise, who married fellow dancer Carolyn George in 1956 and has four children, decided to start giving inner city boys free dance classes through public schools and teach ballet to cops, starting as early as 1964, before he’d really left the stage. (Eventually, his classes for the NYPD had to end, mostly because their erratic schedules didn’t lend themselves to regular classes, D’Amboise said.)

He doesn’t even go to see the ballet much anymore, saying, “When I go there I see ghosts…the ghost of Eddie Villella.” Instead, he focuses on the present and giving other young boys the gift he got: an unlikely perspective—a life with art as part of it.

His effort to bring dance to children, especially young men and boys, eventually blossomed into NDI.

“It’s very hard to get boys [into dance] because of the father, sometimes the mother, but the father [usually] doesn’t want their son to go to ballet class,” D’Amboise says. “The father worries: ‘You can’t make a living that way,’ or ‘They’re all gay in the ballet.’” Pushing past that is one of the greatest challenges in teaching dance to boys.

At first, D’Amboise’s goal was not to start a nonprofit organization, but to have classes for boys in public schools and have them fully integrated into the curriculum. “Not after school, but…like mathematics or social studies,” a mandatory class, he says. And for a while he schlepped himself and some musicians to the local schools that wanted his instruction, providing it for free. But once his wife saw his bill for taking taxis to the schools where he was teaching—$6,000 the first year, he says, and this was the ’70s—she urged him to get nonprofit status.

The girls in the schools also protested the fact that the classes weren’t for them, so D’Amboise began including them. And soon, NDI was born.

NDI’s mission, since 1975, is simple: classes are free or nearly free, everyone is welcome, no one has to become a dancer.

“I danced for a long time before I asked myself the question,” he says. The question being, “What is dance?” He now thinks it’s “an invention by human beings to express space and time…to express wonder and emotion by losing control in how we move in time.” Needless to say, that’s something everyone should have in life, in some form, at some time or another. It’s so obvious to D’Amboise he never even says that.

Given NDI’s broad mission, you might think the classes would be free-flowing, experiential type affairs. Montessori school with yoga breathing, or something. But they are not.

When I visit, new teachers are learning how NDI works, leading kids in a sequence. When D’Amboise enters the spacious main studio, many veteran teachers run over to hug him. He observes the sequence and then issues the young dancers a challenge: “Do it twice as fast.” Execution is not perfect, but the kids love the challenge, easily speeding the steps up, using their new found knowledge of counting the beats in a measure. Then, D’Amboise issues another order: “Do it twice as fast as that.” Their eyes widen; they try. Execution is still suffering, but many are surprisingly up to the challenge. Then D’Amboise makes a request that even seems to surprise the teachers: “Try it twice as fast as that.” Execution is out the window, but he’s made a great point: Never assume you’ve tried everything or shouldn’t push something just a little farther.

Now that NDI has secured its home (the apartments above the complex help defray new costs, which are less now that they own their building rather than renting in Soho), D’Amboise can rest, knowing the school can continue with or without him. But he doesn’t. He flits from class to class, giving books you “really might like” to everyone and pointing out the priceless art that hangs, almost inconspicuously, on the walls, all of which is from his personal collection, which he probably wouldn’t even call a collection. They are just more gifts, like so much he’s gotten in his life and now wants to share with others.

“This is a Cezanne,” (though it’s a print). “These are [from] Rauschenberg.” He’s the kind of man who inspires that kind of generosity.

Still, he knows that at 82, he won’t be able to oversee NDI forever.

“I’m in the suppertime of life,” he says. But he’s definitely still enjoying the meal. 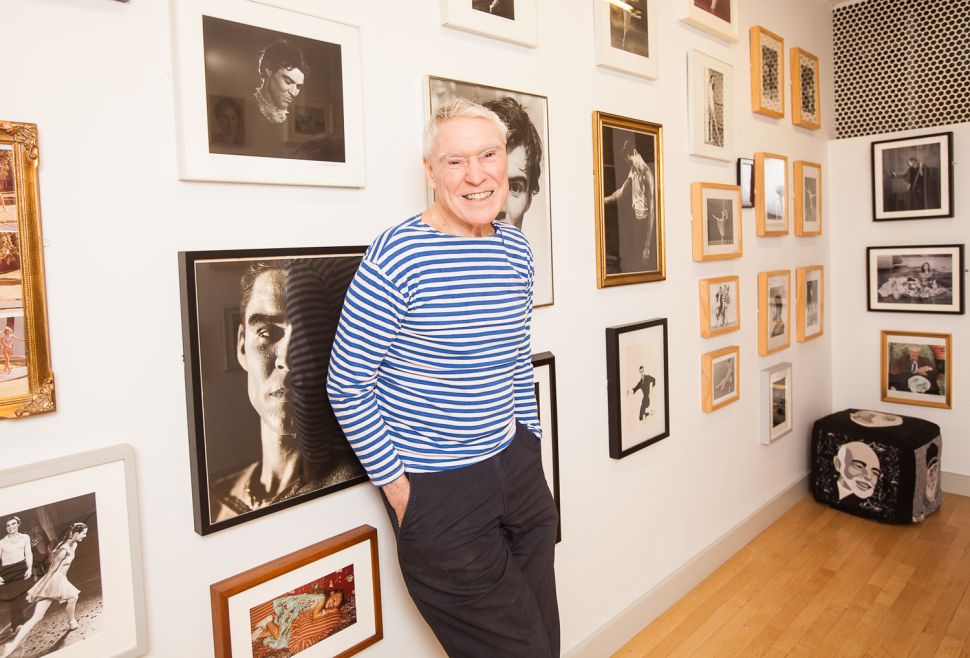