It’s no secret that local Council members typically have veto power over what developments go up in their districts. But after the City Council rejected a rezoning proposal for affordable housing in Inwood when the local member dropped his support, the practice is getting more scrutiny—particularly from a mayor who once held the same sway when he sat in the Council himself.

The Inwood development, Sherman Plaza, was one of the first tests of Mayor Bill de Blasio’s affordable housing plan. Under his Mandatory Inclusionary Zoning proposal, the developers were seeking to build a taller complex in exchange for including affordable housing—with 50 percent of the units being offered below market-rate, thanks to city subsidies. But following significant community opposition to the project, with protesters deeming it not affordable enough and saying it would hasten gentrification, Councilman Ydanis Rodriguez withdrew his support.

Rodriguez is just one of 51 Council members, but his vote counts the most—when it comes to matter of land use, the Council almost always votes the same way as the local member. Sherman Plaza was defeated in the full Council vote. The property owners remain free to build a slightly smaller apartment building on the property, as of right, without any affordable housing at all—leading the mayor to decry the vote as a loss of affordable housing for the community.

“There are some very valid reasons why there is a deference to members in their home districts,” de Blasio, who represented Park Slope for eight years in the City Council, said at an unrelated press conference after the vote. “It’s perfectly good history there and there are some times where that needs to be challenged.”

Manhattan Borough President Gale Brewer, who served three terms in the council and continues to deal with land use questions as borough president, called the question “a hard one.”

“In twelve years on the Council, the tradition of deference on local land use matters gave me the leverage I needed to negotiate better land use deals for my constituents,” Brewer said in an e-mailed statement. “It’s a tradition that usually produces better outcomes—but like all traditions, it can’t be absolute, and it shouldn’t be abused.”

This kind of local control is not unique to New York City government, says Paul Graziano, an urban planning consultant and Queens preservationist, who said the practice occurs “pretty much everywhere around the country” in state legislatures and in the federal government.

There are examples of local control on larger stages, too—the New York State Legislature itself must receive a “home rule” message to pass a bill if it affects a particular city, locale or municipality.

Graziano said the practice works in constituents’ favor most of the time—often, the city wants to pursue development to which locals are opposed, and they can often influence their local elected official more effectively or directly. Amid that kind of local outreach, Rodriguez, who supported the MIH zoning amendment that paved the way for such deals, seemed to struggle to decide how to vote on Sherman Plaza. A committee vote on the project was scuttled at the last minute, he waffled about whether he’d actually announce a position at a press conference and was even heckled by opponents to the development while he spoke at length before announcing his final decision.

“I think he was covering his ass,” Graziano said. “He’s very worried about being reelected.”

Unsurprisingly, some Council members don’t see an issue with their role in the land use process.

Councilman David Greenfield, chairman of the Committee on Land Use, expressed frustration over media coverage of the proposal, which he says portrays the process as lying exclusively in the local Council member’s hands.

“It’s not accurate,” Greenfield said of the idea that the vote is entirely up to the council member. “It’s not accurate because the Council member, by and large in my experience, wants to come to a place where they can make a deal. And there are factors that are out of their control, and hence the idea of negotiation.”

That negotiation typically involves the mayor, the speaker, the land use committee, special interest groups, community organizations, unions and trade groups. In some ways, the local council member serves as a check on the power of citywide entities like the mayor’s office and the City Planning Commission, which consider land use proposals as they move through the Uniform Land Use Review Procedure before reaching the Council stage.

But unlike other stakeholders, the Council member gets the privilege of speaking for his or her entire 51-member body in exercising their veto power.

Greenfield argued against that characterization, too—insisting that the full Council would contradict the local member if if there is not a “legitimate land use rationale as to why the Council member is voting against it.”

But examples of the Council doing that are rare. A well-known exception is when then Councilman David Yassky voted “no” and the bulk of his colleagues voted in favor of the 17-story Dock Street Dumbo development in 2009, pushing it through.

Yassky was term-limited out of the Council at the time, but was considering a run for Congress. Graziano said he suspected a “fake follow” had been afoot with Yassky’s vote: that he voted “no” to appease his constituents who opposed the project, but gave his fellow members the OK to vote in favor of it.

Yassky, now dean of Pace University’s Elisabeth Haub School of Law, denied Graziano’s assertion, noting that he was always firmly opposed to the proposal. He said the Council made the wrong decision on Dock Street Dumbo, but that he does not question the “ability and the propriety of the Council as a whole deciding that a citywide priority overrides a neighborhood concern.”

Still, he called Rodriguez’s rejection of Sherman Plaza a mistake.

Greenfield argued it was the administration that didn’t do enough to assuage Rodriguez’s concerns about the bulk of the development and its affordability. But the affordability at Sherman Plaza went beyond what’s typically called for through MIH. Negotiations had brought the project up to 50 percent affordability, or 178 units, in part funded through city subsidies.

The Council hasn’t always had so much power over land use—before 1989, it was largely up to the Board of Estimate, made up of the five borough presidents, the president of the Council, the mayor and the comptroller. But the board was dismantled for giving the populous borough of Brooklyn the same number of votes as sleepier Staten Island, and the Council became a larger player in land use debates.

Councilman Jimmy Van Bramer, a de Blasio ally who is currently at odds with the mayor over a proposed Sunnyside development, recently told NY1’s Inside City Hall that the mayor has to respect the Council’s role in land use decisions.

He said Council members know that the person who was elected in a given district is the one who “will have to face reelection there and knows the issues.”

“That is the person,” Van Bramer told NY1. “Democracy works, and it just can’t be applauded when it works in the way you want it to work. Even when you disagree with it, it’s still the best we’ve got.”

Queens Councilman Peter Koo, who withdrew support for the Flushing West proposal after widespread community opposition, said he cannot tell Rodriguez what to do in his district and that Council members’ power is limited as is.

“If there’s some merit, the mayor and the speaker will lobby all of the individual Council members about the merit, about the importance of this development,” Koo said. “But so far, I have not seen the mayor or the speaker do any lobbying on the developer’s behalf.”

But he stressed that the speaker’s role is to help individual Council members “when they have problems, to stand up to the administration,” not to help City Hall.

“The speaker is our voice so she or he shouldn’t try to come around and push us to do things,” he said. “Her role is to build consensus.” 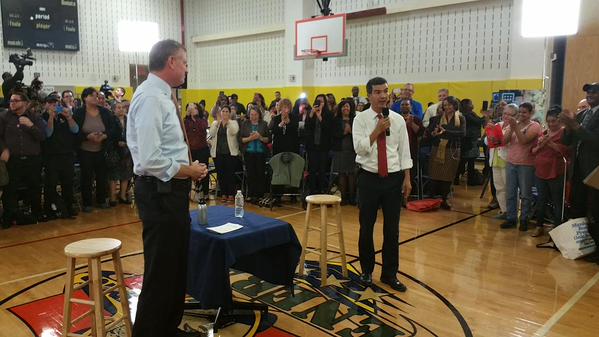