If Pat McGrath’s constantly sold out creations (glitter adorned lips, celestial-seeming highlighters) are any indication, the lines between runway beauty and DIY beauty are getting increasingly blurry.

Meanwhile “real” girls (or at least some of the ones you’ll find knee-deep in followers on YouTube) are experimenting with looks almost exclusively acceptable on the digital platform itself.

This season at NYFW, there was a beauty look for everyone, from the extreme beauty minimalist to the girl who never leaves the house without a red lip. So, with the New York leg of fashion month behind us—a trend roundup:

The cool kids of Class 2017 are back! @bandofoutsiders_la is reborn. Loved ❤️creating this look with boy brows, pinched pink cheeks and dewy skin. Thank you to my @maybelline team who killed this look. 🙏🏻 Epic Styling by the charismatic @matthew.henson 👏🏻 Hair @joeygeorge you nailed it. 🙌🏻 Nails @ritaremark YAS girl 👊🏻 #bandofoutsiders #maybelline #graceleebeauty #nyfw #mnyfw #ss17 #dewyskin #eyebrows

It was a bad season for SPF (or a good one depending on how you look at it) in that numerous shows mentioned a “has been out in the sun look.” At Alexander Wang, Diane Kendal used a simple mix of NARS’ famed multiples ($39), to create a sunburned look while Maybelline lead, Grace Lee created looks using the same blush on the cheeks and eyelids for a sun-kissed look at Band Of Outsiders.

It’s been reported that Alexander Wang (by way of Redken’s Global Creative Director Guido Palau) convinced 18 models to bleach their hair for this show. Some of those girls also got shaggy bobs to amplify those cool, boyish, surfer vibes.

Shift the gloss north from the lips and you’ve got one of the most prevalent trends in beauty right now. Truly, the look was everywhere. At Baja East, another Diane Kendal-directed look was done with sharp black liner and glossy lids. At Altuzarra, Tom Pecheux created a variation on the trend with a look that mixed a sweaty aesthetic with glitter. Ditto at Opening Ceremony where this NARS gloss ($26) was used in place of eyeshadow. It’s one of the easiest looks a trendy girl could ask for, in terms of at-home replication. All it takes is a little moisturizer, or lip gloss. But if neither of those appeal, you could always glam it up via Kevyn Aucoin’s new Exotique Diamond Eye Gloss ($38) (when it’s back in stock that is, if you needed any more proof that this is an of-the-moment look).

Red on top lip, pink on bottom. Using our Spring inspiration of #MichellePfeiffer's character in Scarface, @maccosmetics created this stunning makeup and @moroccanoil made the most perfect waves 💋

From Cushnie et Ochs’ red-on-top, pink-on-bottom lips to an almost-classic look at Creatures Of The Wind, makeup artists went all in on updating this classic beauty look this season. At Jason Wu, MUA Yadim created the look with a mix of two reds and a dab of neon orange theater paint smack in the middle.

VARIATIONS ON A CLASSIC SMOKEY EYE

The girl we all wanna be, Bad ass with a touch of class! Thank you @toocoolforschool.us for the gorgeous makeup I used to create the look. Hair by my favorite @kennalandny 👌🏻 cheers to my ace team for your beautiful work. Thanks to Johnson @officiallibertine for all the colorful happiness. 💜😍🔹🔥💜😍👁💜🍳🍳💚❤️😻💃🏼👯🐶

The smoky eye is not going anywhere. Backstage at Libertine, MUA Katie Jane Hughes created smudgy, but sharp look using thick black liner (K-beauty brand, Too Cool For School’s Dinoplatz Highline Eyeliner) ($22) all around the eye with a feline flick, and added dimension with a midnight blue shadow layered atop. Again, Kendal (I hope this woman is now on vacation) created a more everyday version of the look with MAC at Prabal Gurung. The key to the smoky eye: NYFW edition seems to be extending it all the way around and into the waterline. 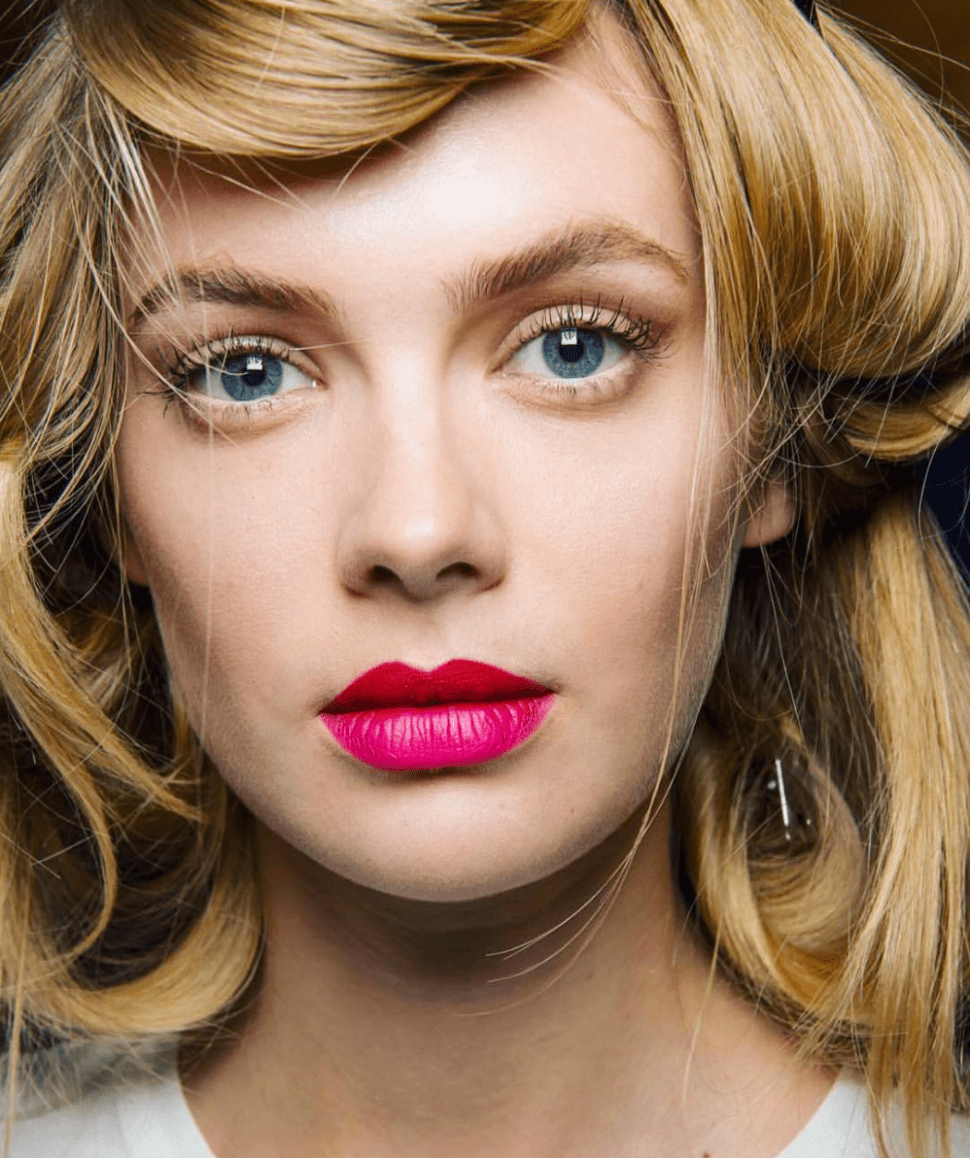