FXX’s dark and amazing comedy You’re the Worst (disclosure: it was created by a good friend of ours) had its third season premiere this week. And per usual, people loved it.

In case you didn't know, #YoureTheWorst @YTWFXX is off to a fantastic start this season! If you're not watching, jump in! You'll love it!

“This dress doesn’t have a butt.” – Lindsay #YoureTheWorst

I can't stop watching #YoureTheWorst it's so addicting!

Lindsay is the best supporting comedic character in a generation. So why is @MsKetherDonohue not nominated FOR ALL AWARDS? #YoureTheWorst

The show consistently proves to be very quotable.

Lindsay: Is this Feminism? Are we Feminists?

IT'S THE OPPOSITE OF THE TITLE OF THE SHOW 😳🤔 #YoureTheWorst pic.twitter.com/xrhPO4ZUFx

"I wouldn't say I have to be miserable to produce, but bone-deep horror & constant dissatisfaction are helpful." -Jimmy#YoureTheWorst

Dana: Didn't he ever go to middle school? #YoureTheWorst

“The unknowable is terrifying. That’s why humanity explores, to shine a light on the frightening dark that surrounds us.”#YoureTheWorst

Halt and Catch Fire is halfway through its own third season, and the show has become a nice blend of feminism and sociopathy.

#HaltandCatchFire is one of the most underrated TV Shows out there, why more ppl are not talking about it is surprising @HaltAMC

"Don't smile. We might fail." A phrase every founder should use at the end of a job offer. (Thanks #HaltandCatchFire, you're the best.)

Everyone on this show is a dreamboat.

Breaking:
I have a pretty big crush on the entire cast of #HaltandCatchFire 🔥

New crush in #HaltandCatchFire 🔥 I hope Manish Dayal who plays Ryan Ray gets it on with Joe. 👬 #AmazonVideo pic.twitter.com/VR1u8qRKM8

If you watch #HaltandCatchFire, you know about my attraction to Kerry Bishé. She's very hot.

This is fine art. It deserves to be hung at the Louvre.

Whoa. Does this really work??

Hey guys I've learned something shocking. Watching good tv is much better if I put down phone/tablet. Loving #mrrobot & #HaltandCatchFire 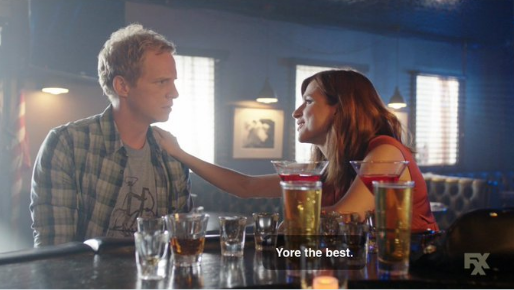