Nominally, South Korea is very much up to speed. Antecedent in the areas of fashion and WiFi accessibility, it’s easy to assume that everything else is just as modern. I’m guilty of this assumption.

On my fourth day in the peninsular country last week, I decided to venture out on my own—away from the galleries and museums where each viewing and interview was groomed and polished for a western journalist—and find some fried chicken. There was a well-reviewed establishment within walking distance of my hotel, so I consulted the service Americans generally do for directions: Google Maps. Alas, Google told me I couldn’t reach my destination on foot. Funny, I thought. Is it somehow confused, perhaps thinking I’m still in New York City? Stupid thing. I found the restaurant on my own.

Later, I concluded another meal at a tony gallery, not far from the so-called Blue House, the nation’s presidential residence. I had walked there and knew it to be a quick jaunt from my hotel. I again consulted Google and was again told there was no way to navigate home. I asked one of my South Korean hosts what was up; she quickly dismissed the strange results and suggested trying another service.

Turns out whip-fast internet doesn’t mean an unimpeded one. As others have pointed out, and I should have known, the South Korean government regulates the internet with a concerning zeal. Not only is pornography illegal, but the government also routinely deletes comments on social media, according to a 2014 report from the Economist. The story notes that a law is still on the books preventing South Korean maps from being taken out of the country (a precaution to keep North Korea from having detailed information on its southern neighbor). That rule has been interpreted, a cursory Google search reveals, to include any server data located in another country, which Google’s is.

This is a long way of saying that it makes sense that the bulk of the artwork on view at the Gwangju Biennale, which began September 2 in the southern city of the same name, has a political bent. Asia’s pre-eminent biennale, now in its 11th year, is not only held at the site of the Korean government’s notorious 1980 massacre of left-leaning students (and eventually civilians)—it is an ongoing source of reflection in a country that apparently needs it.

Let’s back it up, though. For those not familiar with the Gwangju uprising, sometimes called simply “5.18,” here are the facts as I can best construct them: In 1980, a group of students protesting President Chun Doo-hwan’s seizure of power (he was later “elected”) and use of martial law were beaten, shot and killed by paratroopers sent from Seoul. Gwangju residents came to the students’ rescue and effectively, shockingly, held the city for nine days. They were sure the American government would notice their plight and intervene, given the U.S.’ close ties with the South Korean power structure, according to a report by the Korean Resource Center, a nonprofit advocacy group based in California. The U.S. never showed. The government for years insisted that the uprising was led by communists, and even banned the music associated with the student protest movement.

Doo-hwan was later sentenced to death for his role in the massacre but was pardoned. Estimates of how many people died vary. A Korean newspaper says 165 people perished, while the Wikipedia page for the uprising says 606. A prominent Seoul gallerist told me “thousands of people” died in the conflict, which is now seen as a key moment in Korea’s democratization.

The Gwangju Biennale is a result of the protracted “sorry” the government has given the city in the form of a bounty of funding for cultural projects, the gallerist said, over a glass of wine. In addition to the Biennale, which attracts international visitors, the city boasts the Asia Cultural Center, which opened in 2013, and a host of other cultural events.

This year’s Biennale, the first under the stewardship of imported Artistic Director Maria Lind, appeared frenetically assembled. While each of five galleries in the main hall—an architectural feat that drops you onto a mountain path at the top floor—allegedly holds to a theme, I could not easily parse those associations. In the end, that didn’t matter. The show could be enjoyed in an experiential fashion, without reading about or knowing who, exactly, made each work. Political work, after all, has a way of explaining itself.

Such a format will not suit everyone. Art lovers often like, perhaps even need, context, and a lack of exposition on the provenance of each work, while liberating to some, may be frustrating for others. The show’s title “The Eighth Climate: What Does Art Do?”—a rather broad, abstract query that will alienate some—was supposedly inspired by a 12th-century philosopher. Thankfully that connection, too, was not made very clear.

Still, many of the 252 works by 101 artists on display stood on their own or in relation somehow, despite the lack of universal cohesion. The absence of a unifying thread may have been purposeful: Lind called the 2016 Biennale “radically heterogeneous” at a press conference.

Video art took the center stage, with one gallery on the top floor entirely dedicated to media works, including Jeamin Cha’s engrossing Fog and Smoke, which follows a fisherman driving a tractor through the last remnants of old Incheon. That gallery was arranged after “the Soviet constructivists and how they showed art,” according to Lind. While the choice made for a whimsical walk through video art, the gallery was too dark to navigate easily, and some visitors stumbled over parts of the installations.

That was just one way in which cracks in the organizational composition of the show were evident. Installation was still underway during the preview, and some works were not set to be completed until well into the next week, it was rumored. Air conditioning did not reach the top level, and the sultry Korean summer wilted viewers. But at the same time, the feeling that I’m far from the carefully appointed white walls of global city galleries, seeing art I’d probably never see there, is worth it.

Lawrence Abu Hamdan’s video and still photo work Earshot (2016) is a standout. The Lebanese-born artist plays an audio transcript of a murder trial in Israel over images of the audio ballistic analysis of the gunfire used in the killings. Hamdan’s work in the Forensic Architecture agency at Goldsmiths College in London centers on silence, recording and the nature of speech. The questions he raised with the investigation/work were later used in U.S. congressional testimony about whether Israeli soldiers had violated the U.S.-Israel arms agreements, according to the Biennale literature. The work is informative, profound and restrained.

Other pieces are even more explicitly political, such as Indo K-Work, an ongoing piece that consists solely of research into the patterns of Indonesian migrants working in Korea, by Julia Sarisetiati, and the mixed-media works Drift; Root 01 and Drift; Root 03 by Inseon Park, which look at the lives of physical structures that are slowly being destroyed by the human pursuit of convenience.

And other works dealt in issues lateral to politics, such as identity and performativity.

Berlin duo Pauline Boudry and Renate Lorenz presented three film works among an installation of related items that feel as though they guide the viewer from film to film. To Valerie Solonas and Marilyn Monroe in Recognition of their Desperation (2013) is about as feminist as titles get. The sound and film piece (one character is the 16 mm camera, according to the artists) reinterprets a 1970 work inspired by the book SCUM Manifesto, written by Solanas (best known for shooting Andy Warhol in 1968). The clever cinematography is all the more impressive as the film is just one long shot.

Some pieces strove for political import but came up lacking. David Maljkovic’s Out of Projection, a five-year project that brought Peugot’s factory workers into the French auto maker’s research department—where they had not been welcome before—lost its impact outside the context of French classism. An accompanying assemblage of video pieces and abstract sculpture failed to elucidate the project, which came off as somehow both inscrutable and condescending.

Meanwhile, Teeth, Gums, Machines, Future, Society, a video work by Lili Reynaud-Dewar, was a puzzling documentary about the importance of the grill mouthpiece in African-American culture. Interviews with African-American men about their tooth adornments are intercut with what looks like network news B-roll of some of Memphis’ most neglected neighborhoods. The effect is lazy ethnography, at best.

In choosing Lind, a Swede, as director, the Biennale president said he was consciously moving away from “grandiosity.” Lind, too, distanced herself from the art world’s impulse toward the spectacular, saying she selected work that looked at, among other things, how the “booming art market” has effected how art is funded. She also aimed to honor Gwangju’s history, with the tertiary programming in and around the Biennale—such as curated walks through the city with, say, a local carpenter, and Teatime with the Biennale, where people tell curators what they want from the event—forming a “stronger connection to the city” than in the past. “I don’t think spectacle is often interesting,” Lind said. In this way, the Biennale moved away from art fair mode, wherein what photographs well is often what’s talked about.

Indeed, one gallery was peppered with the relatively small folded three-dimensional paint and steel pieces of Rana Begum and the shiny metal mirror and wood wall sculptures of Monir Shahroudy Farmanfarmian. The pieces were mounted on the wall but placed in and amongst the other larger works. The curatorial choice highlighted each smaller piece, resisting our impulse to categorize and compare similar works by the same artist.

The centerpiece commissioned work was a full-scale reconstruction of a bookstore called Nokdu Bookstore for the living and the dead by Dora Garcia. The faithful reproduction of the meeting place where “the Gwangju uprising 5.18 was incubated and hatched,” was tastefully stocked with current left classics such as Dispute Plan to Prevent Luxury Constitution and Abolish Work. The books were also for sale. The graceful, simple work made its point effortlessly: The thoughts, places and people this event shattered should not be forgotten, and their work is not done.

The Biennale is up until November 6 at the Gwangju Biennale Exhibition Hall in Gwangju, South Korea. 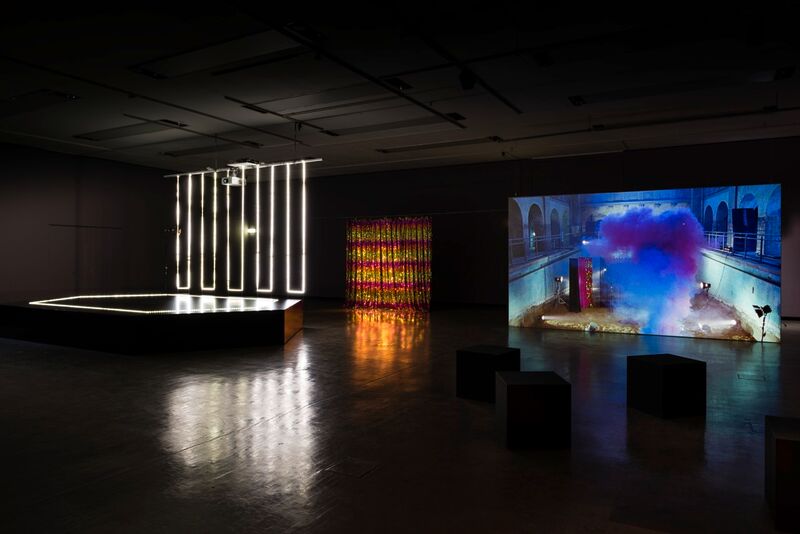