Saturday marks the 40th anniversary of the unveiling of NASA’s first vehicle in its celebrated line of history-making space shuttles, the Enterprise. These days, the spacecraft that helped build the foundation for America’s golden age of human spaceflight enjoys a well-earned retirement at the Intrepid Air and Space Museum in midtown Manhattan. But how did it end up there?

The journey of the Enterprise began before the Apollo era and even before NASA technically existed. Before the space agency we know today, there was NACA—the National Advisory Committee for Aeronautics—and they were the first to consider a spacecraft that could journey to space and back, landing horizontally on a runway much like a commercial airliner. A decade later, during the mid-sixties, the Air Force would conduct top-secret research into these kinds of vehicles and determined that a reusable design was possible and cost-effective.

In 1968, NASA officially began work on what they called the Integrated Launch and Reentry Vehicle and a year later, President Richard Nixon would throw his support behind the agency’s endeavour to build this spacecraft. After a few years of conceptualization and redesigns, NASA Administrator Dr. James C. Fletcher would present a space shuttle concept to President Nixon in San Clemente, California on January 5th, 1972. Three months later, Congress approved funding to build it.

NASA finalized a prototype design called Orbital Vehicle 101 (OV-101) in 1974 which would act as a test vehicle that will never actually leave Earth’s atmosphere. NASA completed this vehicle, that would later be known as Enterprise, in 1976. “Enterprise was not built to fly in space–it was missing key systems,” explained NASA’s Chief Historian Bill Barry to the Observer. “There were originally plans to retrofit OV-101 and make it the second operational shuttle orbiter, but during the course of development it became clear that the cost of making Enterprise space-worthy would be excessive.”

Enterprise was not the vehicle’s intended name. After construction was complete, Dr. James C. Fletcher told his higher-ups in Washington that NASA would call it the Constitution and be unveiled on September 17, 1976—the anniversary of when the United States Constitution was officially adopted. Star Trek fans, however, had a better idea.

Without today’s internet, Trekkies managed to pull together and launch a vigorous letter-writing campaign to the White House to have OV-101 named after the iconic spaceship commanded by James T. Kirk in Gene Roddenberry’s Star Trek television series. It was revealed in a recently declassified White House memo, that President Gerald Ford’s senior economic advisor William Gorog attempted to convince Ford to name the shuttle Enterprise and that Administrator Fletcher was not keen on it but could be convinced otherwise.

“NASA has received hundreds of thousands of letters from the space-oriented “Star Trek” group asking that the name ‘Enterprise’ be given to the craft,” wrote Gorog in the memo. “This group comprises millions of individuals who are deeply interested in our space program.”

President Ford, who served in the US Navy, told Administrator Fletcher that he preferred the name Enterprise because of the Naval vessel, the USS Enterprise—an aircraft carrier that was one of the few to survive World War II and the most decorated carrier during the war. On September 8th, 1976, OV-101 was officially given the iconic name.

Just over a week later, the Enterprise was unveiled to the world at the Palmdale California assembly facility in front of a crowd of a couple thousand onlookers, high-ranking NASA officials, and Gene Roddenberry along with most of his Star Trek cast. William Shatner did not attend.

Four months later, following the rollout, Enterprise was transported over land to NASA’s Dryden Flight Research Facility at Edwards Air Force Base—about 36 miles away—to begin the approach and landing test program. These tests would last nine months between February and November of 1977 and would showcase the shuttle’s ability to soar through the atmosphere and land like a fixed-wing aircraft. As the Enterprise was a test vehicle with no real power or engines, it was mated to NASA’s 747 shuttle carrier aircraft to be ferried to a higher altitude which could act as a proving ground for its maneuverability and landing approach.

NASA astronauts Fred Haise, Gordon Fullerton, Joe Engle and Dick Truly worked in crews of two and took turns landing Enterprise after it detached from NASA’s 747. In March of 1978, following these flight tests, Enterprise was ferried to NASA’s Marshall Space Flight Center to be vertically attached to solid rocket boosters and an external tank for firing. This would allow for crucial vibration tests. A year later, Enterprise would be moved again, this time to Kennedy Space Center’s Launch Complex 39A for a “fit-test” to make sure future shuttles can be successfully launched from that pad.

Over the course of the next few years, Enterprise would make its way around various NASA facilities to help engineers practice for the coming line of space-worthy shuttles. The first was Columbia in 1981 followed by Challenger, Discovery, Atlantis and finally Endeavour in 1991. Over the course of the program, two entire shuttles and their crews were tragically lost, but not in vain.

By the time the space shuttle made its final voyage in 2011, it was responsible for the construction of the International Space Station and the Hubble telescope—considered to be mankind’s finest engineering and scientific achievements. Both are still in heavy use today, helping to advance human exploration of space and understanding of the universe. Enterprise helped build the foundation for this and continued to be a flagship of sorts for the American space program.

“Enterprise was used to test out the hardware, fittings and procedures for shuttle launch,” said Bill Barry. “But, I think the most interesting aspect of Enterprise’s role has been its use as a cultural icon–representing our country internationally (in Europe and at the World’s Fair in New Orleans) and at the Smithsonian.”

On April 27th, 2012, for its final flight, the Enterprise was removed from the Smithsonian and flown out of Washington Dulles International Airport atop its 747 ferrier to John F. Kennedy International Airport in New York, where it soared over the city skyline before landing. Enterprise was then taken to New Jersey to be loaded on a barge and floated up the Hudson river to its new home on the flight deck of the Intrepid, a decommissioned US aircraft carrier turned Air and Space museum. 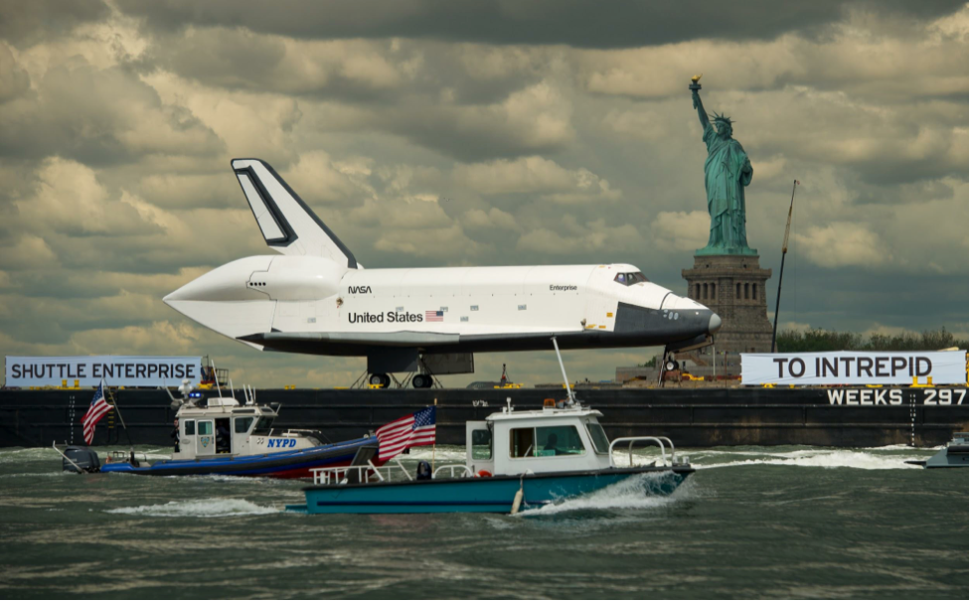