Heidi Chakos was walking alone at roadside before daybreak along Tahiti’s main road, fresh out of border control at the Pacific island’s airport, laden with bags. She’d been terrified landing on a runway right on the edge of the ocean, but now the young woman, who looks as though she just won Girl Next Door of the Year, had a much more ground level view of a foreign place without a clear plan for getting to the village where she’d made arrangements to stay. And it’s still kind of dark out. Here’s what she wrote of that moment:

In the back of my mind I’m very much aware that I have no wifi signal, meaning I’m virtually unable to connect to anyone if this whole hitchhiking thing were to go … badly. I have no choice but to put my full faith in the good of humanity and trust that I will get there safely.

Whatever you felt reading that, you’ll feel it a lot more if you read more of Chakos’s posts about her travels, which she’s been sharing on a relatively new social network called Steemit that runs a lot like Tumblr. Only a couple months of posting her stories has financed more adventures abroad with a brand new digital currency (like Bitcoin) called Steem.

Chakos funded her most recent trip, to Peru. Steemit rewards users for using it by giving them some of the cryptocurrency that runs the site. “I have really been using my Steem Dollars to fund my trip to Peru,” she confirmed over email to the Observer.

CoinDesk recently ran a feature on how the Steem system works. It explains how the site uses three different crypto financial instruments. Steem, Steem Power and Steem Dollars (which isn’t confusing at all). Coincap ranks Steem, the money, as the fifth largest cryptocurrency by market capitalization (the value of all the Steem in all the world), at a $120 million.

This reporter has been sharing excerpts from stories there since May. The system says the account is worth $127. We’ve bought a little Steem and sold a little, just to see it in action.

If Steemit gains traction, its users will realize profits more quickly than users of other social networks have, because the site isn’t only giving them a share of the money it creates (one social network, Tsu, also said it would share its profits, but that didn’t work out so well), but users can also earn a stake in the whole system, in the form of Steem Power.

Knowing how weird internet money works and actually seeing it in action are two very different things. Chakos appears to be doing well on the site, but she’s not one of its biggest movers. Her best post earned more than $12,000 Steem Dollars, but she usually ends up somewhere more around $1,000 (often less). She’s not made the top 100 on this list of the so-called “Steem Whales,” some of whom have total account values estimated at more than a million Steem Dollars, but she’s doing well enough to live a more interesting life.

It was a friend who told her about the site, which only launched in March. “I remember he told me about a post that made hundreds from talking about grilled pineapple. I thought ‘Well, if they like grilled pineapple I’ve got a ton of recipes to share,’ ” she wrote. “But I was even more interested in writing about my travels.”

Chakos first posted to the site two months ago. She has 24 posts up so far, but only one recipe (“Authentic Greek Style Potatoes”). Overwhelmingly, her posts concern where she’s been or where she would like to go.

“I was in Florida when I wrote my first blog post,” the Indiana-native wrote. “I didn’t have much expectations for my post so it wasn’t a particularly poignant time for me.” She introduces herself in the first post, which is the normal first post on the site (this reporter still has not done it). The community has that in-this-together vibe we also remember from Google Buzz. In her second, she writes about how a breakup gave her a taste for getting out of the country.

“When I saw the value of my first two posts I thought that it was incorrect,” she wrote. The site shows how much an offering earns in Steem Dollars, which are supposedly equivalent to U.S. Dollars. Each of her first two posts now show a value of more than $400. “When I logged onto Steemit one morning and saw two of my posts about Morocco on the trending page I thought, ‘O.K., this could be a huge life-changer.’

“Before I began posting on Steemit I wasn’t sure how I’d be able to pay for my cell phone bill, let alone be able to afford a three week trip,” she added. “It is absolutely due to my success on Steemit that I’m able to travel much more then I’d expected to this year.”

The tenor of her posts has been shifting. It could be that her involvement in the world of crypto and her encounters abroad have changed her, but Chakos would probably argue that she’s just revealing more. The shift starts to happen in a post she called “Let’s Get Uncomfortable” where she reflects back on her trip to Tahiti (where she nearly died), how living comfortably doesn’t help people grow and how travel resets her thinking about how communities can function.

“I think it’s the post that I cared less about stepping on people’s toes and was more motivated to give my real perspective on traveling and why I choose to travel in the way that I do,” she told us. “This is the most I’ve written in a very long time, so with each post I can feel myself grow and explore more thoughts and different ways to convey my perspective.”

She’s adopted globetrotting as the defining feature of her identity. “At this point my baggage has become the one constant in my life, I suppose that’s something most people wouldn’t like to admit,” her most recent post says. She wrote to us, “It really makes me feel lazy that I don’t have to actively translate words that I hear. That’s always how I feel when I come back to the States after a trip: Lazy.”

It goes a little further, though. Her interest in crypto predated Steem. “I’ve educated myself on geopolitics,” she wrote, looking for ways to hedge herself in case “‘shit hits the fan,’ by investing in things like gold and silver stocks and physical gold and silver.”

She’s also started to write about referring to herself as an anarchist more and more often, particularly in her description of her recent interview for The Anarchast on YouTube (not yet posted).

The perspective isn’t entirely surprising considering how much has happened so quickly for the young woman. This money that doesn’t even have a physical manifestation covered her cost to travel to South America, where she got hypnotized by ants running their own mushroom farm in the jungle and met a 23-year-old woman who founded an educational program for kids in Lima.

Steemit’s founders seemed to have people like Chakos in mind when they wrote in their whitepaper:

There are two ways people can get involved with a cryptocurrency community: they can buy in or they can work in. In both cases users are adding value to the currency, however the vast majority of people have more free time than they do spare cash.

Normally, that work comes in the form of servers breaking codes. Steemit has that, but it also lets people work by posting on its social network. It calls that “subjective proof of work.”

That opportunity has meant enough to her that she got Steem T-shirts printed that she wears in all her photos from the Peru trip. She planned the excursion as something of a mission. “I’m excited to tell them about the new platform and how it can potentially help them to make some extra money also,” she wrote. Additionally, she committed to devoting some of the money she earned to supporting people she wrote about. “I want to help out this amazing platform that has absolutely improved my life,” she wrote.

Fortunately for her, the community seems glad for her to contribute by traveling to places that are nothing like her home and telling them about it. Very shortly, she’s making her way to South Africa, for what she says will be “one of the most risky trips I’ve done yet.”

Successful social networks have a bit of a virtuous cycle for early adopters (if they survive). Myspace gave us Tila Tequila. YouTube gave us PewDiePie. Here in New York, we’re living in the age of the Snap Pack. If Steemit achieves traction, pioneers with a following will be in a uniquely strong position to make the most of it.

That said, the site is still tiny, at about 8,000 weekly active users.

All photos used by permission. 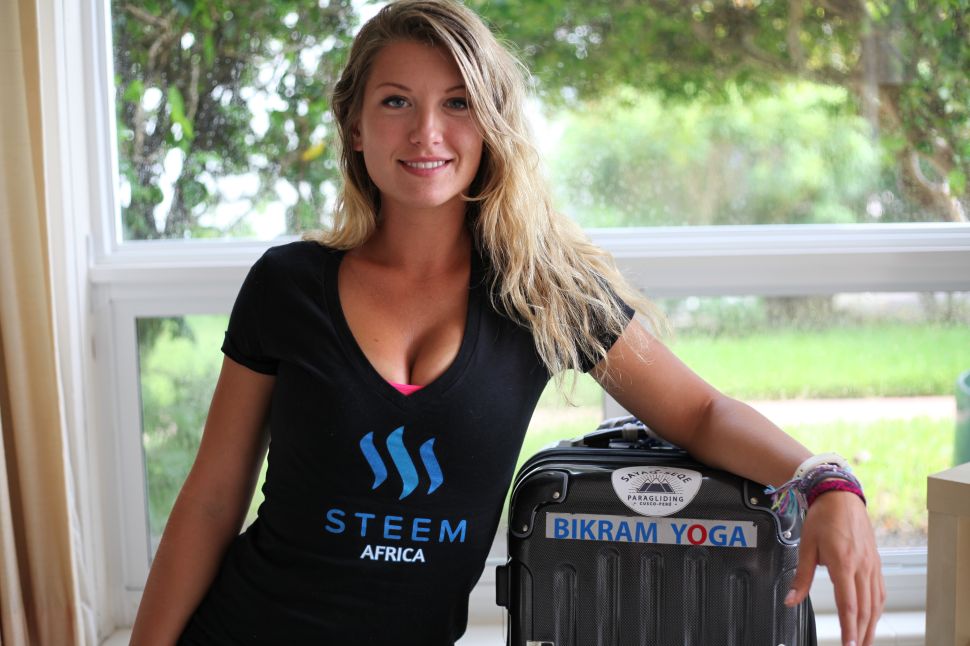