Only three days after the mayor sought to defend his record on transparency, Comptroller Scott Stringer—a rumored mayoral candidate—is calling on the city to release its communications with outsider advisers it calls “agents of the city”—because one way or another, they’ll be coming out, he says.

When running for office, the mayor promised to usher in a new era of transparency and openness with both the media and the public. But his transparency record has been tested by a number of pending cases that throw that campaign promise into question.

One of those cases involves a lawsuit filed by NY1 and the New York Post last week against the de Blasio administration for access to emails between the mayor and close outside advisers de Blasio’s counsel at the time, Maya Wiley, called “agents of the city.” They (and Freedom of Information Law expert Robert Freeman) reject the notion of the advisers as “agents of the city,” arguing that the public should have access to correspondence between the mayor and non-city employees. (The state’s FOIL law allows for emails between government employees and non-government employees to be made available in public records searches, but bars “inter-agency” communications between fellow city workers.)

The administration has said it will defend the city’s position in court and the mayor himself said last week that he views transparency as “providing appropriate information to the public.”

But Stringer does not seem to be buying that story—he says that there isn’t a single explanation the city can give to justify withholding these emails, noting that his own job as comptroller centers on transparency because he says he’s “fighting to get information from city agencies.”

“There is no excuse to hold back these emails from these so-called agents of the city,” Stringer said, seemingly mocking the term. “I think it’s outrageous. As I said a long time ago that they have to release this information. A transparent, open government is what the people of this city demand.”

And though the case is currently pending, but Stringer says the outcome is clear: the city will lose this battle, he says.

“And by the way, there’s no doubt that they’re gonna be ordered to release these emails,” Stringer continued. “I don’t see any way that the agents emails do not become public.”

The comptroller said he believes the administration’s refusal to release the emails must be rooted in fears about the timing—a possible reference to the fact that the 2017 Democratic primary for the mayoral race is coming up.

Earlier this week, Stringer called on the city to release the disciplinary record of Officer Daniel Pantaleo, the officer who put Staten Island man Eric Garner into a chokehold that led to his death.

He also described the mayor’s nonprofit fundraising group Campaign for One New York—which he formed to promote his policies—as a “slush fund,” noting that even though it was cleared by the Campaign Finance Board, it is not “best practice for conducting a political campaign.” In response, the mayor said Stringer “doesn’t know what he’s talking about,” but has experienced another blow as a state judge ordered the nonprofit to release documents and communications it had with the mayor.

The comptroller has been openly critical of the mayor on other issues. Although he did not directly attack the mayor over the controversy surrounding the removal of a deed restriction at former Lower East Side nonprofit AIDS hospice Rivington House, he did blame mismanagement at City Hall and poor execution of city policies for leading to the removal.

The mayor’s office did not respond to a request for comment. 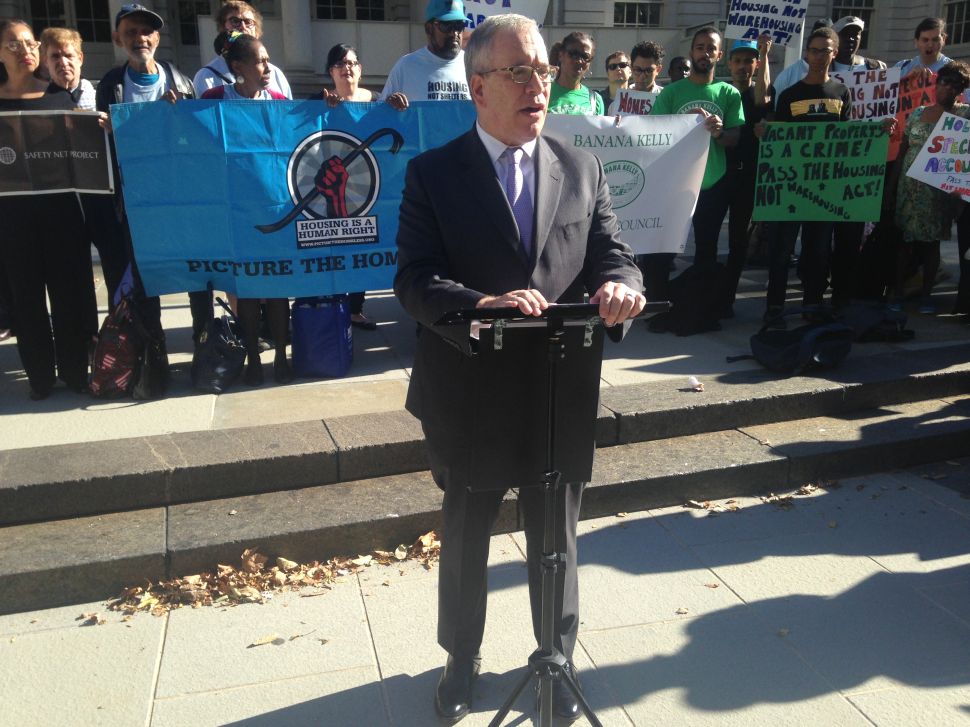