If Zelig’s gift was to be in the right place at the right time, Rabbi Shmuley Boteach has developed a knack for being in a strange place at a strange time. Right now, that place is a taping of The Dr. Oz Show on the Upper West Side, just a few hours after Donald Trump made news by revealing his medical records to the television physician.

Their joint story went viral, with many readers commenting on the obvious dissonance of someone so well known for having appeared in a sex tape with her former husband, Mötley Crüe drummer Tommy Lee—a tape that was stolen from the couple and from which she derived no material benefit, she is quick to point out—chastising others for viewing pornography. Indeed, of the hundreds of comments on the Journal‘s site, many were sarcastic or expressed dubiousness about her sincerity, and some nastily attributed her viewpoint to aging out of being desirable herself.

Well, that last part is just ridiculous. The Canadian-born Anderson remains, at 49, a “total smoke show,” in the admiring words of the fellow who served as campaign manager for Rabbi Shmuley’s ill-fated Congressional run in 2012. But the rest is equally suspect. For one, Anderson has a long track record of forcefully advocating for causes she supports (including occasionally in the Observer). But for another, the instant dismissal of the idea that a beautiful woman might just have something meaningful to contribute to an important discussion kinda proves her point.

The Dr. Oz episode is slated to run later this week, and in a lengthy interview with the Observer, Anderson and Rabbi Shmuley go into deeper detail about what brought them together on this issue.

So we’re here to talk about what’s on everybody’s mind all the time: pornography. It seems like everybody in the world read this article. So why don’t you tell me the genesis of why you two decided to attack the subject?

Rabbi Shmuley: We had seen that Pamela as a supporter of Israel speaks out very positively about Israel, even honeymooning in Israel, and my organization wanted to honor her and thank her. She gave an amazing speech, and what everyone saw is that while Pamela Anderson is arguably America’s most famous sex symbol of the past 25 years she has a great mind, great heart, very insightful.

So we became friends. We started meeting for coffee in California when I’m there a lot visiting my father, and I was amazed at her insights about relationships, which is what I write about. So when the whole Anthony Weiner story broke there was a tragic quality to it. I think people see it as, “Oh, if you hate Anthony Weiner, you’re happy to see him self-immolate. If you hate Huma Abedin, you’re happy to see her suffer.” But there’s a little boy stuck in the middle, and his parents are now divorcing. I was only four years older than that boy when my parents divorced. So I called up Pamela, and I said, “You know, what we’ve been talking about, the loss of sensuality, the addiction to pornography, men’s need for this constant fraudulent erotic stimulation consumed this guy. What do you have to say about it?” And I started taking notes and everything and wrote it up and showed it to her. She said, “That’s a good piece.” We submitted it, and it went gangbusters from there.

Pamela, why is this topic near to your heart?

Pamela Anderson: Well, I’ve been writing for a while now on sensuality, and I have this book called The Sensual Revolution that I’m working on, and I see the disconnect and the lack of human interaction and technology. I think from my perspective I can really see the worst of it. I feel like I’ve seen just even being me and having this kind of objectification, and kind of taking it as a compliment at first and thinking ‘this is great and this is love’ to be called sexy and wonderful, but to see my relationships really suffer because either porn addiction or maybe being cast into this relationship as a caricature, I just really felt disconnected from my partners. It’s going completely the wrong way. I’m used to Playboy and this really wonderful kind of free-spirited sensuality, sexuality, but I think it’s taking a really dark turn. I have two teenaged boys, and I realize that it’s a little bit hypocritical because I’ve been in Playboy and because of the tapes that were stolen, but those were home movies that were stolen, and people made money on them, and they weren’t anything for the public to see. It just really struck me, and I feel a real lack in my own sexual life, and I felt like, Gosh, if I’m feeling this way, so many women must feel this way.

This really blows my mind, because if you’re saying this—you, the very definition of a sex symbol in the post-World War II era…

Rabbi Shmuley: Don’t leave me out of that as well. I kind of define it as well. We’re kind of a team here, you know.

Pamela Anderson: Neglect is a form of abuse too and is a way to control somebody. And to make them feel less than and not worthy or not sexy, and a lot of times with women I think that maybe you get into a relationship because of a certain image. I’m still trying to figure it all out as we’re discussing it, but I find that committed relationships and loving relationships are the way to have the best sex and the best sexual connection, and women are very sexual creatures, so when you’re ignored and people withdraw from you to go into a basement to watch porn, it’s devastating.

You mention you’re raising two teenage boys. I have a teenage son, and I just don’t want him to think that that’s what love is and that’s what marriage is.

Pamela Anderson: And that’s what people do say to me: “That’s how people learn how to make love.” I say, “What? Oh, boy. Really?” That’s how to become a very bad lover if that’s how you’re thinking. People that are addicted to porn sometimes are addicted to prostitution, and when you are hiring people for sex, that’s very self-indulgent and not about giving to another person. So I worry too about my kids looking at that or dating sites or you know, swiping the girl left to right. I want them to experience real love, real passion and to be able to treat people respectfully, and I always tell them if you disrespect women you disrespect your mom.

To repeat what Pam said that neglect is a form of abuse. I’ve always believed that in relationships the sins of omission are much more serious than the sins of commission. I do marital counseling, and I have seen wives forgive their husbands for affairs and all kinds of bad stuff, but they don’t forgive them for neglect because there’s no relationship if there’s been neglect.

So let’s get to some prescriptions though. What do you do? What are some solutions here?

Why do you think that this article took off so strongly?

Rabbi Shmuley: I think there’s two reasons. The first is definitely the wives and the girlfriends are sick of it, and they fear that they can’t say anything because they will come across as prudes.

Rabbi Shmuley: A couple of pictures, what are you bitching about? What are you complaining about?

Pamela Anderson: Everybody is doing it.

I’m glad to be able to look you guys in the face and say I never watched your sex tape. And it’s not because…

I never watched it because I thought it was intruding on your privacy.

Pamela Anderson: Yeah. It was two people in love. It wasn’t two people trying to be famous, trying to make money off of something.

And I’m such a huge Mötley Crüe fan, too. It was like a double fan. I didn’t watch it because of that and subsequent ones of other people too. I just don’t do that.

Pamela Anderson: We were offered so much to…We just said no, absolutely no.

Pamela Anderson: It was pretty devastating.

Rabbi Shmuley: I think bootleg copies of some of my sermons have done far better to be perfectly honest.

I want to thank you for Borat as well.

Pamela Anderson: Thanks. We did a few different endings, and that’s what we came up with, yeah. I found that since I did that actual movie I’ve been offered roles on a daily basis pretty much just to play myself, cameos as myself, which is no fun for an actress. But it’s been kind of like here and there with raising kids and stuff like that, but now I’m kind of ready to get into some more fun roles that are not playing me.

Rabbi Shmuley: Who is your dream guy?

Pamela Anderson: I’ve been turned off completely. My kids are just going to the university, and like I said, it’s that spark I see in someone’s eyes. It’s not going to be someone I meet on the internet. It might not be here, it might be back home, it might be in Canada. I’m not saying just American men; I’m saying that when I came to do Playboy I think some people kind of looked at me as a different person. I just kind of generalized and thought Canadians were better lovers. There’s something more sensitive and sensual about people that are…

Rabbi Shmuley: It says in the Bible that when Queen Esther meets Ahasuerus the King, and he has his harem, and she has to win him over, because otherwise her people are going to be decimated in a genocide, that God engineered that it was winter so that the friction of bodies was so much more pleasurable. So I think the fact that 99 percent of Canada is under an arctic layer of ice most of the year, definitely.

Pamela Anderson: [Laughs] I think that’s it. That’s my calling. I’m going back. 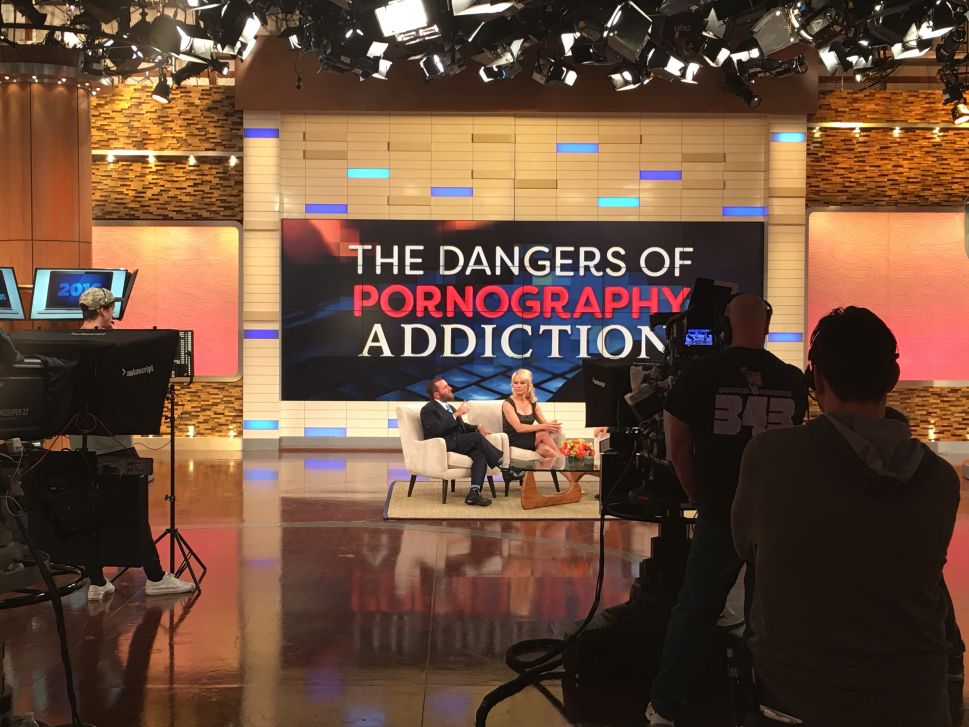