Australian films are like local wines from Australian vineyards. They don’t always travel. A bore called The Dressmaker is the latest example. I remember years ago, when I was invited by the Australian Film Commission to travel Down Under and preview the newest movies from Oz on their way to the outside world. In addition to classics such as Mad Max and My Brilliant Career, they also showed me a baffling rural curio called Dimboola. It was a depiction of life among rural Australian hillbillies in a remote section of the wilderness in the title. It didn’t make a bit of sense, and the intended humor was as foreign to an outsider as Scottish haggis. I imagine its elusive qualities were considered hilarious only to Aussies, in much the same way our homegrown Ma and Pa Kettle movies remain a source of head-scratching mystery to anyone in Melbourne, Amsterdam or Rome. What is the Australian slang for “hillbillies”?

Anyway, a year after it was greeted with total indifference at the 2015 Toronto Film Festival, we now get a predictably brief appearance by The Dressmaker on American shores that wastes the estimable talents of Kate Winslet. She’s made odd films before, but this time someone should have advised her to stay in bed. Set in a hick town called Dungatar in 1951, she plays an eccentric called Tilly Dunnage who was sent away when she was 10 years old after killing a classmate—a crime she doesn’t remember. Two decades later, she returns as a chain-smoking bleach blonde with a trunk full of Paris fashions and a Singer sewing machine, hell-bent on revenge. She takes one look at the ramshackle village she came from, exhales a blast of Bette Davis smoke and sneers, “I’m back, you bastards.”

Regarded with suspicion and distrust, she soon wins over the acid-tongued, mean-spirited local women with her sewing skills and plans to open a dress shop of her own designs. After what seems like an impossible length of time in which nothing ever happens to move the whimsical plot along, the mystery of Tilly’s childhood is solved. But not before she meets up with a tangle of contrived eccentrics with names like Marigold and Beulah, guzzling Browne’s Elixir Nerve Tonic. In addition to assorted villains, the plain girl in the dry goods store turned into a fashion plate and the town hunchback, the quirky characters include Tilly’s mother, played by the enchanting Judy Davis, disguised as a haggard, toothless old crone, an Australian version of Mammy Yokum (talk about a stretch) and Hugo Weaving (Priscilla, Queen of the Desert) as a cross-dressing policeman who craves some of Tilly’s off-the-shoulder satin for himself. Hanging around for the beefcake, there is Liam Hemsworth as the local hunk who unconvincingly falls for Tilly, looking and acting like a gay porn star while baring every inch of flesh the censors will allow. By turns dark, tragic and downright silly, The Dressmaker epitomizes a certain corny side of Australian country humor, crudely emphasized by the plodding direction of distinguished filmmaker Jocelyn Moorhouse (Proof) and the superficial script of her writer husband PJ Hogan (Muriel’s Wedding). Whatever were they smoking?

The real stars are the colorful costumes created by Marion Boyce and Margot Wilson, but they’re not enough to save the movie at large. The Dressmaker is threadbare before Tilly’s first taffeta strapless comes out of the trunk. 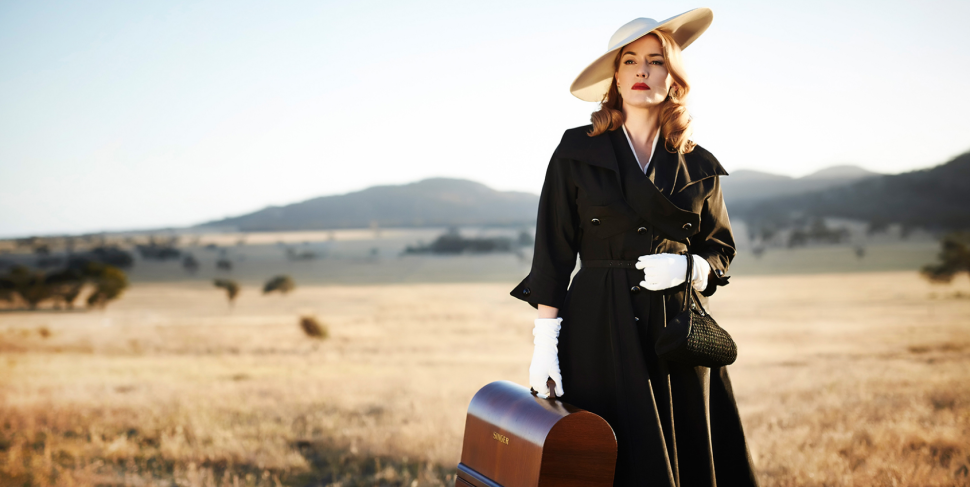