On Friday, NFL teams made their final preseason roster cuts, reducing the players on each team down to 53 men in preparation for the grueling 17 week regular season, which kicks off Sunday. Tonight, the cuts made by the Los Angeles Rams will be repackaged into what is always the year’s greatest hour of reality TV: the final episode of this season’s edition of HBO’s Hard Knocks, a show that has quietly become the paragon of the genre.

Every year Hard Knocks follows one NFL team during its month-long training camp. Training camp is the NFL’s preseason. Hard Knocks has shown it also might as well have been designed by a television executive, although no television executive would have the resources to pull of a show like Hard Knocks. It turns out the NFL, a league built on spectacle, violence and machismo, accidentally created the perfect setting for one of the most goosebump and tear-inducing reality shows.

“This is the ultimate ‘Survivor’,” series creator and executive produce Marty Callner told the Observer. “The thing I like about Hard Knocks is that it’s not alternate reality, not made up reality. It’s real reality. It doesn’t get any more real.”

Consider: a team invites 90 players, all of them world-class athletes, to camp. Only 53 make the final roster over the course of two separate reductions in personnel (from 90 to 75, and then from 75 to 53). Those who make the team are immediately wealthy (minimum annual pay for a rookie is $435,000). Those who don’t lose the dream they have spent their entire lives pursuing. They do this while sequestered in Spartan dorms on a college campus a few hours from the city they represent. And no women allowed, a rule that ends in an immediate dismissal from the team, as one Ram learned this season.

To break up the brutality of the practices and the monotony of film sessions (in which coaches deliver expletive-filled tirades that would make Gordon Ramsey blush), teams sponsor rookie talent shows, “whose ugliest?” competitions, and Mexican food spelling bees. It all makes for great TV, and so do the pranks players regularly pull on each other. Of course, there is rookie hazing as well, which often involves locker room haircuts that look like crop circles.

Hard Knocks can be funny, really funny. Bengals receiver Chad OchoCinco (formerly Chad Johnson) might be the best character in the whole series (his catchphrases –“kiss the baby” and “child, please” – as well the reaction they elicit from players and officials alike, were worth the cost of an HBO subscription back in 2009), which is why he got his own reality show on VH1 the next year.

He returned to the show a few years later with the Dolphins, who effectively ended his career when they released him for a domestic battery charge. The show can be deadly serious as well.

Most episodes culminate in preseason games played front of thousands of fans. The four preseason games on the NFL schedule are pretty boring affairs compared to regular season contests: the best players only play a handful of snaps as a kind of tune-up, while the scrubs do their best to prove themselves to coaches. What Hard Knocks does brilliantly is make the back end of the roster, the undrafted rookies from small no-name colleges, the veterans hanging on as their skills erode, the journeymen with years of experience but not one meaningful play on their resume, worthy of our rooting interest. “You have the chance to see these guys without the armor,” Callner said.

“They aren’t just playing to make the team for themselves,” Callner added. “They are playing for the families that made all these sacrifices to get them to this point.”

Callner started his career as the director of the Boston Celtics TV broadcast in the late 70s before putting together a resume full of iconic music videos and concert films. In 2000, the same year “Survivor” and “Big Brother” launched the reality competition genre, he first pitched the show to both the NFL and HBO. During the fall of 2001, Callner and four camera crews shot the defending champion Baltimore Ravens during their training camp in Westminster, MD.

Callner gained access to Ravens camp thanks to coach Brian Billick, who had served as an assistant director of PR for the 49ers in the late seventies and understood the PR value of Callner’s idea. The next year Callner filmed the Dallas Cowboys, owned by famous attention seeker Jerry Jones (who got plenty of airtime as both owner and general manager).

The show went on extended hiatus after that – with a sort of watered down version with the Jaguars airing on the then fledging NFL network in 2004 – before returning to cover the Kansas City Chiefs in 2007, which was narrated by local fan Paul Rudd.

“One year HBO wasn’t satisfied with the teams being offered,” Callner said. “At which point I tried to explain and qualify that it doesn’t matter what the team is…the stakes are still the same.”

In 2008, with the return of the Dallas Cowboys and previous narrator Liev Schreiber (who Callner calls the “MVP of the series”) the show took on its modern form: five episodes with heavy narration. The second incarnation of the show was such a success the NFL instituted a rule to ensure a team would have to subject itself to HBO’s cameras, even if none volunteered.

What started as four camera crews shooting 700 hours of footage for every episode in 2001 is now 30 cameras shooting 3,500 hours of footage per episode. Luckily, the increasing size of the show’s production has occurred as the size of cameras and microphones have decreased.

“When you go there, the first thing you notice is how inconspicuous we are. Its like we aren’t even there,” Callner explained.  “It also helps that in today’s world cameras are everywhere. We’re just another camera.”

Despite increases in production value and the quality of the cinematography and score, what has always made Hard Knocks unique in both sports and reality TV production is its turnaround. The show airing tonight will be mostly comprised of footage from Thursday’s final preseason game and Friday’s final roster cuts. Callner estimates it takes 15 or 16 editors to turn thousands of hours of footage into a tight hour-long narrative, with a variety of characters, in just a few days. Players and coaches will often reference the previous episode. One episode this season featured a woman in full mermaid costume at practice after Rams defensive end William Hayes declared that dinosaurs are fake, but mermaids are in fact, real.

But what makes Hard Knocks our greatest reality TV show, and not just, say, a sports documentary, are the roster cut episodes, which occur in the final two installments of each five episode season. The proceedings are ritualized and emotionally powerful. They are effectively stripped down rose ceremonies or tribal councils, but with higher stakes.

After weeks of practice and preseason games, the coaches gather in a conference room to debate the merits of keeping or cutting players, and, off-camera, final decisions are made. Then it is the job of a mid-level team employee, known as “The Turk” in NFL lingo, to tell the cut players the coach would like to see them. Usually, he does this by knocking on the door of a player’s dorm room, which are shared by two players. The uncertainty of who the Turk is coming for only increases the tension.

The cut player, always stoic, goes to see the coach, who informs him that he will be released in a tense and awkward one-on-one meeting (these meetings are always filmed by a robotic camera in the corner of the coach’s office.) The coach sometimes tells the young man he should keep trying, that he can play in this league someday. Sometimes the players do catch on with other teams. Diminutive running back Danny Woodhead, who the Jets cut in the final episode of the 2010 season, went on to find success, and even stardom, with the Patriots and Chargers. Other times the assessments are less rosy, and the implication is clear: the player will need to find something else to do with his life, and abandon what is usually the only dream he’s ever had.

According to Callner, this is the emotional center of the show.

“The last two weeks of Hard Knocks are really the best weeks. Those are the weeks where the reality sets in,” Callner explained. To him, “Hard Knocks” is a name that isn’t just evocative of the physical pounding the athletes take during training camp.

“Obviously, it means pads and the hitting. But it also means The Turk coming to your door and knocking on your door. That’s a hard knock.”

It’s also a dramatic one. And when a young man answers it, it’s as real as reality TV gets. 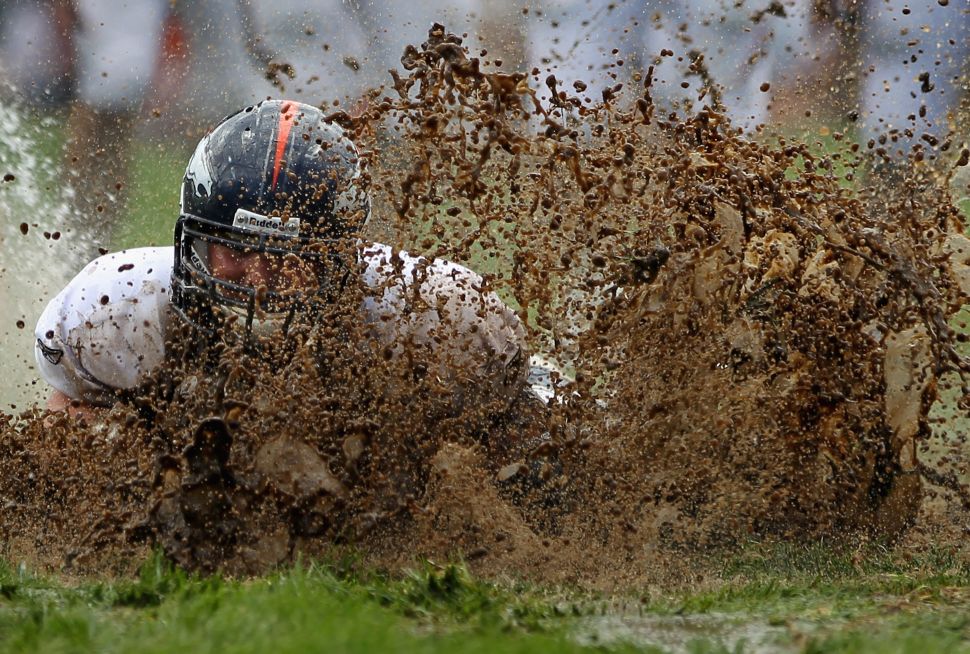