In a CNBC piece entitled “What I learned reading 3,721 pages of Hillary Clinton’s schedule,” Eamon Javers fills us in on the juiciest, most scandalous piece of information yielded by his painstaking review of every single page of Secretary of State Clinton’s schedule from early 2009 through mid-2011. What Javers was able to extract after untold hours of tedium will surely excite the Large-Print-Note-Card-Writers in Donald Trump’s headquarters.

Among what must have been thousands of meetings conducted all over the world, the United States secretary of state met with some famous people, and some rich ones. This is surely the only time in history that high-ranking government officials have hosted famous philanthropists or influential business leaders, and it is no wonder, therefore, that such unprecedented meetings should be regarded as constituting the dreadful “scandal” that they do.

For example, it emerges that on March 19, 2009, Clinton met for 30 whole minutes with actor Ben Affleck, who also does a great deal of work on human rights and humanitarian issues in the Democratic Republic of the Congo, and who has repeatedly been asked to testify before Congressional committees on African affairs. On October 26, 2009, Bill and Melinda Gates, whose foundation devotes staggering resources to delivering vaccines, drugs, and diagnostic devices to address third word afflictions like HIV, malaria, and hunger, met with the secretary of state for 50 minutes. A year later, on October 5, 2010, Warren Buffett, whose foundation partners with the Gates Foundation on those causes, had lunch with Clinton for an hour. And less than a week later, on October 10, Clinton spent half an hour with Mort Zuckerman, the owner of the New York Daily News, and a staunch supporter of Israel who has written and spoken often on issues in the Middle East.

This nefarious conduct has provided still more fodder for Hillary-Haters, who seem to feel that all of this is nothing less than “MeetingGate,” an outrage that proves once and for all that she is “dishonest” and “untrustworthy.” It is far from clear how these meetings are even newsworthy—let alone a scandal—but here we are. It is a measure of the lunacy that has kidnapped American political discourse that backers of a billionaire Republican candidate who talks endlessly of his acquaintanceships with third-tier celebrities can excoriate Clinton for meeting with rich, famous people.

The Trump campaign’s willingness to say absolutely anything, no matter how over the top, and no matter how flatly it contradicts something their candidate has said on previous occasions, raises the concern that political discourse in this country—admittedly never anything to write home about—has been worsened irreparably.

Thus, Trump traveled to Iowa late last month to deliver this thoughtful analysis: “Hillary Clinton wants to shut down family farms just like she wants to shut down mines and steelworkers.” This was positively high-brow material compared to the GOP standard bearer’s previous characterizations of Clinton. She is “unstable,” “unbalanced,” “pretty close to unhinged,” “actually not strong enough to be president,” “crooked,” and “a pathological liar,” to name just a few of the insults that have flowed from the would-be leader of the free world over the last several months.

If it seems that time-honored standards for candidates for the most powerful position on the planet have been destroyed by Trump’s capture of the Republican presidential nomination, the same is true of the demise of hypocrisy as a perceived negative for potential candidates. We may someday regard with nostalgia the days when blatant duplicity on the part of one seeking high office was actually seen as an impediment to the candidate’s election, let alone a disqualification for it.

Thus, twice-divorced Trump, with a robust history of enthusiastic adultery, derides Clinton because her husband was unfaithful to her. The Trump who travels the country uttering the misogynistic dog-whistle that Clinton lacks “stamina” told Fox News not all that long ago, “I think she works really hard.” The candidate prone to nonsense—like calling her “the worst secretary of state in the history of the United States”—famously told Fox previously, “Hillary Clinton, I think is a terrific woman. I am biased because I’ve known her for years.”

To be fair to Trump and his surrogates, however, they are onto something and they know it. Whether it is raw anger, or the fact that the prospect of a smart, resilient woman as president unleashes something very unpleasant, or because to some degree she has brought her high unfavorable ratings upon herself, there is a willingness—a desire, even—to assume the worst about Clinton, regardless of supporting evidence.

It is unclear, for example, why the Clinton Foundation—set up by her husband to make a large-scale positive difference in areas of the world that desperately need help, and which has achieved great success in doing just that—should be spoken of as though it is a racketeering enterprise.

In 2004, I was asked to travel on the Foundation’s behalf to India to help address a potential issue which, it was thought, might adversely affect the Foundation’s work. Bill Clinton and his team were in the process of leveraging his stature and their knowledge of the HIV/AIDS crisis in Africa to provide relief where none had previously been provided.

Beloved in India, Bill Clinton and the Foundation had persuaded Indian generic pharmaceutical companies to provide anti-HIV medicine at a sharply discounted price. He then used his relationships with donors around the world to provide the funding to purchase the drugs for delivery in Africa. This occurred while the Foundation’s team of experts was in the process of setting up a delivery system so that the drugs that the Foundation has managed to make available could actually be delivered to patients in African villages.

This was five years before Hillary Clinton was appointed secretary of state. That Bill Clinton schmoozes with potential donors whom he hopes will donate handsomely to the Foundation so that the Foundation can do more of this sort of work seems to be regarded by some as “corrupt.” It is nothing of the sort, unless the wooing of prospective donors by every other charity is corrupt.

The potential for ethical problems is real when donations to the Foundation might translate into favors from a Hillary Clinton administration. Still, the hype that surrounds the Clinton Foundation “scandal” is just that.

“There is little if any evidence that federal ethics laws were broken by Mrs. Clinton or anyone working for her at the State Department in their dealings with the Foundation,” wrote Richard W. Painter, the chief ethics lawyer in the George W. Bush White House from 2005 to 2007, in The New York Times on August 31. “Unfortunately the Foundation is still fuel for Mrs. Clinton’s persistent critics.”

Like all but an exalted few, Hillary Clinton has made mistakes. And the debasing of our politics is the fault of both Democrats and Republicans alike. It was Democrats, after all, who were more than happy to hurl unfair accusations at George W. Bush and his administration for being everything from deliberate deceivers of the American people to war criminals.

Still, it would serve us well to remember that there will be “a morning after” the upcoming election, when the season for governing resumes, and there is important work that needs to be done. Reining in the hyperbole, and getting a collective grip on our over-caffeinated rhetoric will help to prevent that work from being made completely impossible. 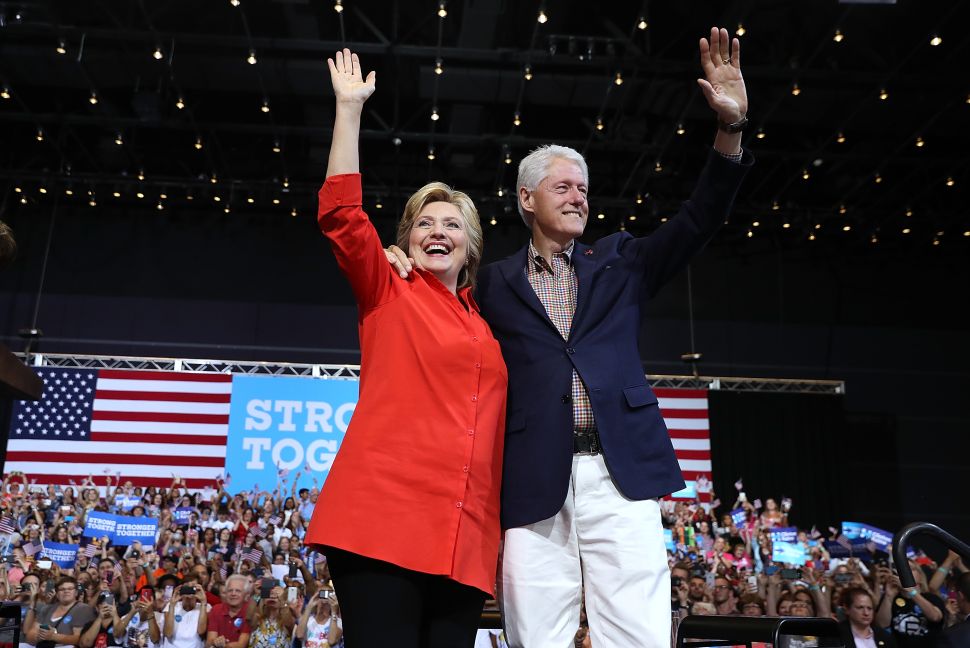