KENNEDY SPACE CENTER, Fla.—Dr. Dante Lauretta is the pioneer behind NASA’s bold 7-year mission to intercept a potentially hazardous asteroid, collect a sample from it, and bring that sample home to be studied for generations to come.

As a professor of Planetary Science at the University of Arizona in Tucson and the Principal Investigator behind the OSIRIS-REx Asteroid Sample Return Mission, Lauretta leads a team of scientists and researchers from his University’s Planetary Laboratory and NASA’s Goddard Spaceflight Center.

Today, Lauretta awaits the 7:05 p.m. EST launch of his state-of-the-art spacecraft at Cape Canaveral—over a decade after he began working on it—and stands among the titans who are helping get his project (literally) off the ground. Veteran spacecraft manufacturers Lockheed Martin built OSIRIS-REx, NASA is facilitating the overall mission and research, and United Launch Alliance—the Uber of rides to space—is launching the spacecraft on their workhorse Atlas V rocket. The goal? To study a carbon-rich asteroid named Bennu and answer some pretty startling questions. How will we mine asteroids for resources? How did life begin in our solar system? How do we track asteroids that could impact Earth?

When Dr. Dante Lauretta listed the objectives for his spacecraft, he realized the acronym spelled out OSIRIS-REx. To get an overview of the mission, the Observer asked him to break it down for us:

“OSIRIS-REx is an awesome acronym that defines the primary science objectives of the program.”

“The origins investigation really focuses on the fact that Bennu is a time capsule from the earliest stages of our solar system’s formation. And we believe, represents a reservoir of -rich and organic-rich material similar to the kinds of bodies that delivered those critical compounds to the surface of the Earth—making it the habitable place that it is today and also potentially providing the molecules that were the seeds of life.”

“The spectral interpretation is where we’re looking at this asteroid. We have looked at Bennu with telescopes all over the world using phenomenal instruments. We’ve utilized space telescopes like Spitzer, Hubble, and Herschel to really to characterize Bennu as best as we can with those assets. But for most of those telescopes, it’s just a single point of light. And you’re trying to determine its size, shape, composition, rotation, and its orbit—that’s why we need OSIRIS-REx out there with its own phenomenal instruments. We’ll be able to ‘ground-truth’ all of those measurements.”

“For the resource identification—as I said in 2004, when I wrote that down, I was thinking that this was just kind of a cool science fiction-themed idea but sure enough, now we’ve got companies that are now incorporated with the objective of mining asteroids. We’ve even got nations that are starting to invest in this activity as a way to get resources in space for the future. We’re going to substantially contribute to those sorts of activities because we are developing all kinds of cutting-edge techniques and technologies for maneuvering a spacecraft in the microgravity environment around an asteroid. So that turned out to be a great challenge that we first anticipated when we started designing the mission.”

“Most of the time, on these planetary missions, we orbit a body like Jupiter or Mars—with massive gravity fields. You’re able to predict where your spacecraft is going to be way into the future and you can plan around that. But when you’re in a microgravity environment like asteroid Bennu, the small forces like solar radiation pressure, outgassing from the spacecraft—even thermal emission from the asteroid itself, can have enough of an impact on the asteroid’s trajectory. We can only predict where it’s going to be two or three days into the future on a short-term timeline. So we’re coming up with processes to deal with that—so you can operate the spacecraft, map the surface of the asteroid, identify a region where there’s material that you want to process, and then send the spacecraft down to collect it and bring it back to Earth.”

“For the security investigation, just by virtue of this target selection, we needed an asteroid that would enable us to launch off of the earth, rendezvous with it, spend an extended period of time, and then depart from it and return to our planet. Those requirements get you to a near-earth asteroid that has a relatively high probability of impacting the Earth. In fact, Bennu has a 1 in 2,700 chance of impacting the Earth in the 22nd century. In 2135, we can predict that Bennu will pass in between the Earth and the Moon. The orbital solution after that event kind of scatters and that’s when we get into the statistical analysis.”

“One of the biggest uncertainties is the Yarkovsky effect. It’s not just Kepler’s laws that are dictating where this asteroid is going to be in the future, but the fact that its absorbing so much energy from the Sun on such a dark surface then re-emitting that energy back into space as infrared radiation. That’s like a thruster that is acting continuously on the asteroid and since Bennu is a retrograde rotator, the emission of infrared radiation acts like brakes and kind of slows the asteroid down. So we really need to understand that phenomenon if we’re going to accurately predict where Bennu is going to be in the future and really any asteroid that we are tracking as a potential impact hazard.”

“Regolith is the loose blanket of rock and the surface of the asteroid and we are going to map it down to sub-centimeter scale. We have to in order to make sure our TAGSAM device is going to work. But just understanding the geology on a small body like this is a whole new area of planetary science for us, so we’re going to learn how these bodies evolve and how they express themselves. All kinds of fascinating planetary science is going to come out of that.” 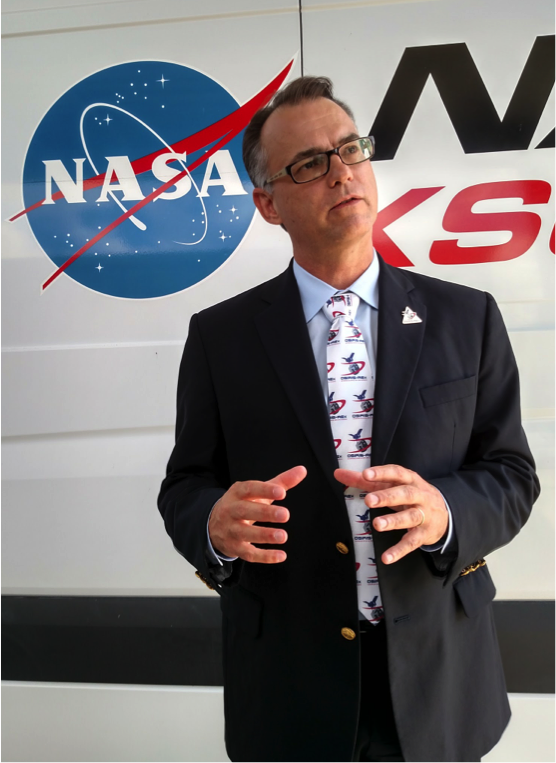