Monse is the brand of the moment, so it makes perfect sense that designers Laura Kim and Fernando Garcia tapped into another “it” phenomenon for their latest show: Stranger Things. Alongside their oversized shirting silhouettes and voluminous cargo shorts, the eery tune that evokes images of Eleven and her crew wafted down the runway.

Kim and Garcia started as interns at Oscar de la Renta, and they are returning to the American fashion house this season as duo creative directors, as announced just last week. But even before that news broke, their third runway show was one of the most highly anticipated ones of the New York season. And they didn’t disappoint.

Though they made showgoers queue up for nearly 20 minutes past the starting time in the late summer heat, they made it up to the crowd with thrilling wares on the runway. Capitalizing on their mastery of the man tailored shirt, and knowing how to deconstruct it, the show was teeming with crisp cotton and striped silks–via shirts, dresses and skirts. Evening wear was well executed, too. It was mostly sequined, like a fiery red one-shouldered gown and a trompe l’oeil off-the-shoulder black top.

You will definitely want to invest in a pair of cargoes for Spring/Summer 2017, as they were a staple of this range. These weren’t your father’s embarrassing vacation shorts; they were reworked (and basically reinvented) with a fold down waistband and a wide leg. The look was elevated and basically as chic as a cargo could ever get, especially in a silky blue version.

But the most major moment on the runway was when two models walked out side by side, donning the same crisp shirt with a pinstripe skirt layered on top. It was a nod back to the creepy vibe you get from the Stranger Things theme song and solidified the fact that #twinning will still be acceptable in real life (and on Instagram) come Spring 2017. Plus, we could totally see Eleven rocking this look, accessorized simply with a box of Eggos. 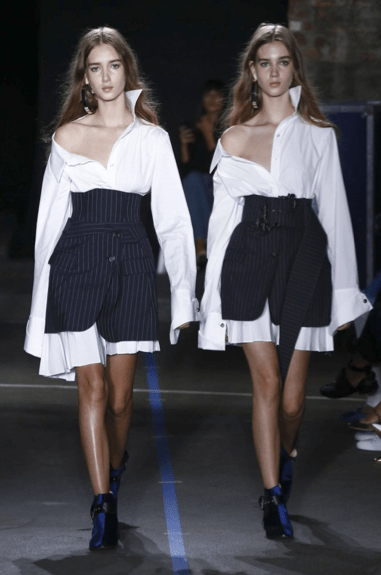