The genre-ripping breadth of can’t-miss shows going down across this city in October dispels the naysayer’s cry the scene is in a downward spiral.

Naturally, the renaissance has been spearheaded by a familiar face: John Zorn. His downtown avant-garde hotbed The Stone is hosting five essential residencies this month (Ches Smith, Brian Chase, Ava Mendoza, David Krakauer and Brian Marsella) and on October 22, Zorn brings his Bagatelles-fest to National Sawdust for a marathon. So dig in and get weird.

Ches Smith Residency at The Stone from Tuesday, September 27 through Sunday, October 2

Smith is as protean as they come: he slays the traps with punk-jazz mettle in Marc Ribot’s Ceramic Dog, composed ghostly minimalist experimental jazz for pianist Craig Taborn and violinist Mat Maneri on The Bell, his debut as leader for the famed ECM label earlier this year and helms big-band super-group These Arches with Tim Berne, Tony Malaby, Mary Halvorson and Andrea Parkins.

Serialist composer and provocateur David Earl Buddin is a beer-guzzling, chain-smoking trainwreck who happens to be one of Brooklyn’s most forward-thinking mad scientists of experimental music plus he’s the gravely-throated troubadour/pianist ringleader of honky tonkin’ bar-band American Liberty League.

Brooklyn is a haven for experimental outliers obliterating sound boundaries with the mashing of jazz with metal. Experi-metal grinders and doomers like Weasel Walter, Child Abuse and Pulverize The Sound have led that earsplitting and mind-bending charge along with doom jazz trio The Gate.

Tubist Dan Peck is deep into that mix: he counts membership in The Gate, runs his own label Tubepede, squelched out tuba doom on Solo LP and is 1/3 of primal noise terrors Earth Tongues with trumpeter Joe Moffett and percussionist Carlo Costa. In 2015 the trio served up the punishing minimalism of Rune and for their follow-up for Neither/Nor Records, Earth Tongues have ventured further into the noise-jazz abyss with monolithic double album, Ohio, a 90-minute free-improv slow-burning sprawl of brutal clang and clatter, cathartic drone and skronk wallop.

Holy Sons is the solo alias of Emil Amos, best known as the drummer of bass/drums doom metal mystics OM and post-rockers Grails and Lilacs & Champagne.

As Holy Sons, Amos trades the sticks for singer/songwriter guise, experimenting with medium-fi downer, yet melodic doom folk. On overlooked gems such 2014’s The Fact Facer and 2015’s Fall of Man, both for the Thrill Jockey label, he aced moody finger-picking atmospheric Americana twang.

Amos keeps the streak going on the forthcoming In The Garden (due October 21 via Partisan), a ’70s songwriter Bonnie ‘Prince’ Billy-esque strum-heavy and lush stroll that finds the drummer turning into quite the tunesmith in his embracing of classic and folk-rock.

With his freewheeling improvisational gigs all over town with likeminded luminaries such as Zeena Parkins, Chris Pitsiokos and Ron Anderson plus alum status in Kid Millions’ Man Forever percussive army, the experimental pedigree of drummer Brian Chase has arguably eclipsed the superstar band he’s been in since 2000: Yeah Yeah Yeahs.

Now John Zorn has tapped Chase for a residency at his Avenue C avant-garde space The Stone and the lineup is A-list. Chase will be free-improvving alongside Lee Ranaldo, Alan Licht, Susie Ibarra, Andrea Parkins and Peter Aaron, just to spout off a few of what will be otherworldly sets.

Hoffman keeps pretty busy himself: he’s a vet of Henry Threadgill Zooid, who plays The Village Vanguard from September 27 through October 2 while his Trio (with bassist Adam Hopkins and drummer Craig Weinrib) hits The Rosemont two sets on Tuesday, October 18. Hoffman also plays a solo set at Happylucky No. 1 in Crown Heights on October 27.

As for Chicago’s Oozing Wound, they take their beer-sloshed cues from ’80s-era sludge-dipped thrash-metal in the vein of Slayer’s Reign in Blood, early Metallica and Seattle grunge rife with the DIY hardcore ethos and a dose of black humor.

Noisy screamoid keepers like 2013’s Retrash and 2014’s Earth Suck trashed NYC coke-snorting posers (“New York Bands”) and featured ragers like “Everybody I Hate Should Be Killed” and “Hippie Speedball.” True to slacker form, Oozing Wound have named their new joint Whatever, Forever, a nihilistic slab of Rambo-obsessed lightspeed thrash with a centerpiece that sums up the band’s creed: “Everything Sucks, And My Life Is A Lie.”

[soundcloud url=”https://api.soundcloud.com/tracks/248380383″ params=”color=ff5500&auto_play=false&hide_related=false&show_comments=true&show_user=true&show_reposts=false” width=”100%” height=”166″ iframe=”true” /]
Downtown avant-garde jazz titan John Zorn has presented “The Bagatelles”—300 new compositions he wrote and collected in a book of music—at both The Stone and at iconic jazz spot The Village Vanguard performed by heavyweights from his stable.

Zorn himself will be making an appearance as his Bagatelles Quartet (trumpeter Dave Douglas, bassist Kim Cass and drummer Kenny Wollesen) will kick off the bacchanal at 2 p.m. followed by an avant-jazz freak’s dream lineup including, but certainly not limited to, Mary Halvorson Quartet, pianist Kris Davis, electronics guru Ikue Mori and Jamie Saft Trio. Stick around until 11:30 p.m. as the festivities conclude with what promises to be a loud as hell mind-fuck by tech-metal assault unit Hollen-voi, better known as Matt Hollenberg-Nick Millevoi Quartet.

Mendoza’s residency will be a clinic in dizzying shreddery as Unnatural Ways (her trio with bassist Tim Dahl and drummer Sam Ospovat) fittingly celebrate the Tzadik release of We Aliens at Zorn’s experimental hub The Stone. Other must-see sets include a rare set by the notes ‘n’ beats-crazed Quok (with Dahl and extreme-music drummer Weasel Walter), chaotic noise-rock goons Chaser, Quartet (with Walter, Battle Trance saxophonist Matt Nelson and bassist Max Johnson) and a duo set that pairs Mendoza with violist Jessica Pavone. Click here for full calendar.

Glenn Branca: The Third Ascension and World Premiere of The Light (for David) at Roulette on Saturday, October 8

No wave maverick and iconoclastic symphonist Glenn Branca presents two works this evening at downtown Brooklyn experimental venue Roulette: the third installment of The Ascension and “The Light (For David),” a piece he wrote in the wake of the death of David Bowie.

Happy Place, an all-instrumental two-guitar, two-drummer mathy jazz group led by composer and percussionist Will Mason, channel the cerebral and mind-altering metal-prog-classical complexities of Zs and Don Caballero on Northfield, due out Friday October 28 on Exit Stencil Records.

Brain Tentacles at (le) poisson rouge on Sunday, October 30 with Gorguts and Intronaut 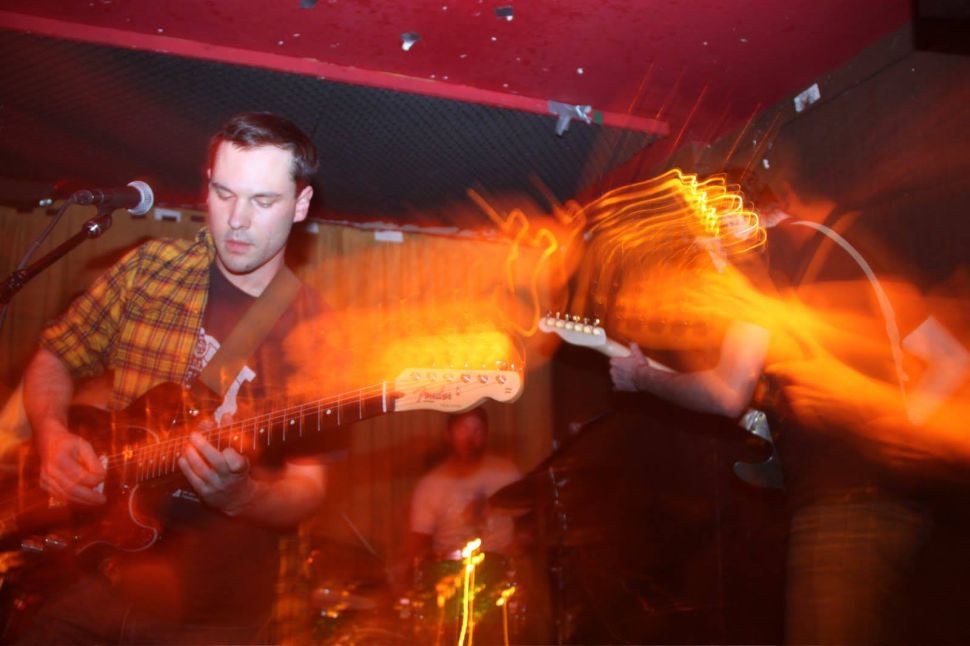