Artists have long flocked to New York City for reasons as diverse as they are. Maybe they want to prove their meddle, maybe they seek a like-minded community—but they also want to be paid for their work.

New York City boasts the largest cultural funding agency in the country. The Department of Cultural Affairs had a budget of $156 million in 2014, and the effects of its relatively profligate spending are everywhere. The Astor Place Cube, the LOVE sculpture, the “Crack is Wack” mural, and even the Wall Street bull are installations that New Yorkers gloss over every day, yet are popular international tourist attractions.

What often gets lost amidst the Harings and the Koonses, though, is the less in-your-face stuff (though it’s not hard to be less in-your-face than giant metal balloon animals). Functional public art actually surrounds us constantly in New York City. And we’re the beneficiaries of the city’s functional public art: helping, guiding, or controlling them, often without us realizing it. Especially downtown, where security concerns are numerous, and especially after 9/11, which sent more funds for cultural projects flowing southward from City Hall, the pedestrian landscape is littered with functional art. But you might have missed a lot of it.

“The most important part of doing a work that’s going to be used publicly is that it inspires or moves people. It has a certain amount of vitality that you don’t have to explain,” James Garvey, a New York-based artist and blacksmith, told the Observer. “It’s sort of visceral.”

Garvey has done numerous commissions for the city of New York. The thick metal loops that wind around columns at the Wall Street subway station for customers to sit on are his signature creation, part of his Lariat series and formed from his proprietary, eponymous technique he calls the JG Bend.

He’s also produced, among other works, Lariat handrails in Central Park; Lariat tree guards on city sidewalks; and benches and other types of street furniture made of the same smooth metallic curves. Garvey describes the JG Bend as “a knuckle-like form” in which a metal bar is forged back onto itself before twisting off in a new direction, adding strength and fluidity to the structure.

Dr. Larry Shiner, emeritus professor of philosophy, history and visual arts at the University of Illinois, Springfield, once described public art of this type in Contemporary Aesthetics as “the importance of two kinds of function: one side emphasizing practical function, the other side emphasizing symbolic or aesthetic function.” If you’re going to undertake public, functional art, you have to be prepared to have it perform both types of work—pretty and useful. But, not so pretty that people are distracted by it. The whole game’s a balancing act.

And sure, if someone sits on your bench, you’ll know it’s working. But what about art that people can’t physically use?

For Maya Barkai, if a work of art is beautifying public space, then that’s enough The Israeli American photographer is best known for her Walking Men installation, which made its debut in 2010 on Church Street in Tribeca and has since become a worldwide collaborative project.

Walking Men is a collection of all types of pedestrian walking signs from around the globe, the international cousins of that little white illuminated figure. Hatted men from Japan, women from Spain, cubist humanoids from Poland, and more all line construction sites, walking alongside the pedestrians that they are simultaneously corralling. The figures are the same size as the pedestrians, and they lend themselves perfectly to Instagram.

“It was functional in the way that it was beautifying; it was rebuilding an area that was going through years of rebuilding,” Barkai told the Observer of the Church Street work.

Walking Men and Garvey’s pieces have more in common than their public context: both were commissioned by the Alliance for Downtown New York, a non-profit that manages the Downtown-Lower Manhattan Business Improvement District.

In addition to providing research and statistics on commercial developments in the area, the Alliance facilitates streetscape services. This is where the artists come into play. The organization has commissioned over 40 works over the years to beautify all the streets south of Chambers Street, including, from 2007 to 2013, a program called Re:Construction.

Re:Construction recast construction barriers as large-scale canvasses for temporary art, covering unsightly worksites with everything from swirling color palettes to country landscapes to flying cows. “It was a little more inviting, a little more bridging,” says Barkai. “The construction was all over…and the art was, as well.”

It’s not hard to believe that people respond positively to art when they see it as they’re walking down the street. But could it be that people are actually more likely to heed a warning, take in a message, or use a public fixture for its intended purpose when it has an element of artistry?

“If it doesn’t, they’ll take it for granted,” says Garvey. He believes that people would “respect,” a trashcan more, for example, if it has aesthetic quality. To Garvey, every public fixture that doesn’t have an element of art is a missed opportunity.

Barkai agrees, through the lens of her own work. “When people see friendlier [walking] icons, they respond to it when they cross the street. But also when they see a friendlier fence…it’s the same idea. When you see something that’s a little out of the ordinary, maybe you just have a better reaction to it.”

What follows, then, is a neat little psychological trick. When faced with a command (“Do not enter”; “This way, please,”) people will be more receptive to obeying it if it’s rendered artistically, simply by virtue of it catching their eye and being out of the ordinary. Barkai lauds the decision in the early 2000s to switch the old WALK and DON’T WALK signs to the new ones featuring the white pedestrian and the red hand. Not only are the symbols more universal, they grab people’s attention more than words.

“Being able to transform an object that’s functional but mundane into an interactive piece of art is exciting,” Jessica Lappin, president of the Alliance, told the Observer via email. “It surprises people and catches their attention and engages them in a positive way. Anytime you can get people stop and take a photo of a traffic barrier, you know you’ve succeeded in changing our streetscape for the better.”

Traffic barriers control human movement – a useful tool in a city of over 8 million unruly citizens (and, in downtown especially, hordes of tourists who aren’t used to New York pedestrian customs). But barriers themselves, such as Garvey’s metal contour roadblocks outside the New York Stock Exchange that take the shape of the vehicles they’re prohibiting, don’t have any actual information to impart to people beyond that no one should plow through them. When it comes to way finding, maybe people are simply focused on how to get where they’re going—especially on their commute.

“In the subway, people just want to know how to get someplace and what train to take and don’t care at all what typeface is used. Just make it easy to read and make the sign easy to understand,” said Paul Shaw, typographic scholar and author of Helvetica and the New York Subway System: The True (Maybe) Story. “Legibility, visibility, location are what count most in such situations.

Designer Douglas Morris of Manhattan design consultancy Poulin + Morris, Inc. agrees that when specific information is to be transmitted, funky designs must take a backseat. “Novelty is not always desirable,” he said. “We have been trained to expect certain information in specific formats; no one wants a novel stop sign.” While it’s a designer’s job to make a sign look nice, when people need to receive a message, it’s important not to overwhelm one type of Shiner’s “work” (the functional) with the other one (the aesthetic).

Morris and his company designed a way-finding motif, as part of Re:Construction, that is on display at four different locations downtown. At 50 Trinity Place, white, sans serif text on black background explains shopping and dining options. Next to that, a red-rimmed white circle features a black, capitalized “YOU ARE HERE,” above a black map of lower Manhattan crisscrossed by white streets. Floating around the backdrop are bold graphics indicating the streets names, the nearest subway stops and how many blocks to get to various locations. It’s utilitarian with an audacious flair.

“The graphic designer has a number of items in their tool box—novelty, shock, whimsy, beauty – to make people stop, take notice, and understand and retain the information conveyed,” Morris said, citing the need to make information stand out in the “visual din” of busy areas.

It can certainly be a din. Standing on any street corner on this island, it seems like there’s a visual megaphone demanding your attention everywhere you look. That bench you’re sitting on features a JG Bend snaking through its seat. The construction site on the next block has figures of giant walking men plastered on it. Even the street map a few steps away is the result of meticulously planned design, bold enough to catch your attention but humble enough to not distract you from the information it’s conveying.

In a city that seems to know exactly what it wants to accomplish, functional public art certainly succeeds in double duty: it serves its purpose and looks pretty damn good doing it. 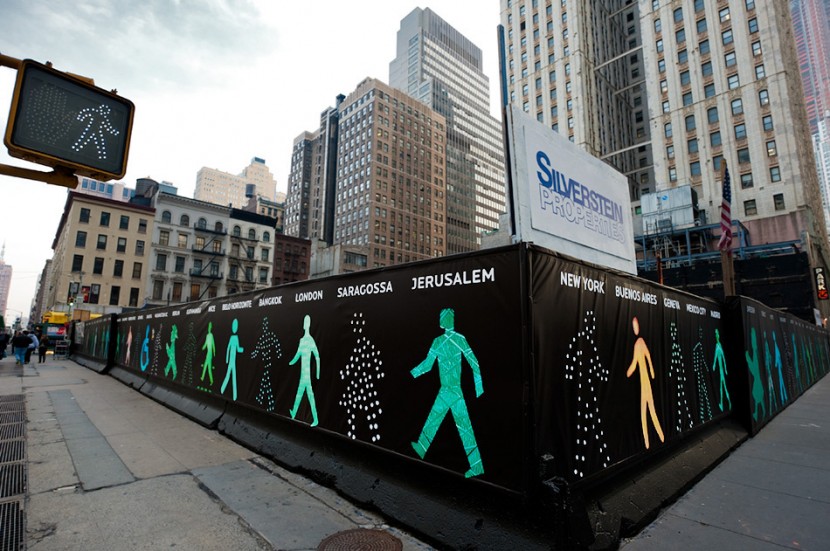