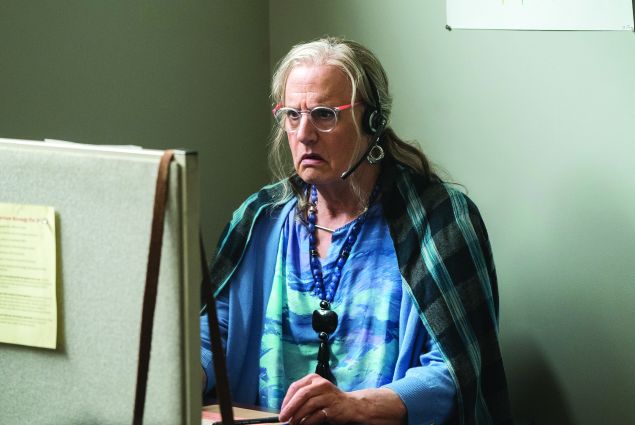 Jeffrey Tambor as Maura Pfefferman in Transparent. Photo via Amazon

What is there to say about Jill Soloway’s critically acclaimed, award-winning show Transparent? It is a beautiful, well-written series with its third season now available on Amazon Prime. The acting is fantastic. The themes are complicated, often without clear right or wrong sides. But when it comes down to it, what matters is there is such a great deal to say about it—the conversations surrounding Transparent are just as important as the fact that its main character, Maura Pfefferman (played by Jeffrey Tambor), is a trans woman.

One of Transparent’s most oft-quoted lines comes in just the second episode. In response to eldest daughter Sarah Pfefferman (Amy Landecker) asking Maura, “Are you saying that you’re going to start dressing up like a lady all the time?” Maura simply replies, “No, honey…My whole life I’ve been dressing up like a man.” And that’s that. She’s pulling herself out of unbearable circumstances—but this is just one step, and we are coming along with Maura for the very long road ahead.

Throughout its course, particularly in the second and third seasons, Transparent has featured scenarios that are more than mere storylines to trans folks—they’re the difficult and often dangerous realities of living in a world where politicians and their followers want to put you in jail simply for using the bathroom. A small, sharp taste of this specific risk is offered early on when Maura attempts to use the women’s restroom at the mall but is rebuked by an angry mother. Conservatives and trans-exclusionary radical feminists (a.k.a. TERFs) have long demonized trans women as a risk to cisgender women and children, often citing bathroom as a sort of danger zone.

This harmful, fictitious notion is one that many feminists still believe—an unfortunate fact that is boldly examined during the second season, as Maura is confronted by feminists who champion for seemingly all women in one breath, then condemn trans women in the next. This discrepancy culminates, when Maura, Sarah and Ali take a trip to the fictional all-female Idyllwild Wimmin’s festival, as Maura learns having been assigned male at birth is an automatic disqualifier for a certain type of feminist.

While once again waiting in line for the bathroom, this time alone, Maura witnesses festivalgoers chanting, “Man on the land,” as male workers arrive, citing potential triggers as necessitating the chant. She is understandably triggered, and in one of Tambor’s most emotional performances of the series, she experiences the absolute terror that comes from being in a purportedly “safe space” that is anything but.

Adding further context to the history of oppression, scenes of the festival are interspersed with flashbacks to the Magnus Hirschfeld’s Institute for Sexual Research in 1933 Berlin of Maura’s mother and transgender aunt, a place where the latter can express herself openly. And in a heartbreaking conclusion, it depicts the destruction of the Institute at the hands of the Nazis—a historic event that, in truth, happened not so very long ago. 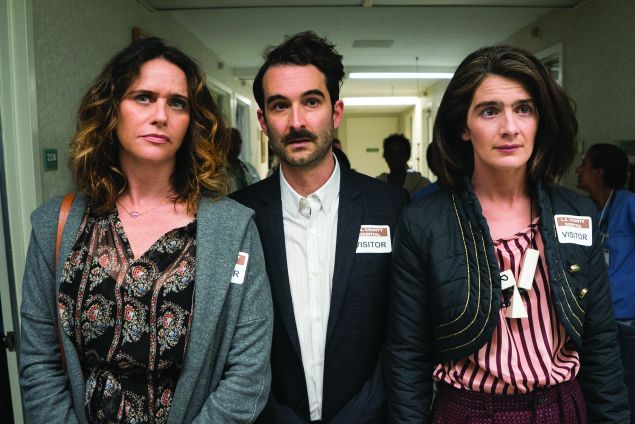 On top of showing the oppression Maura experiences, many of the show’s most revelatory moments come from her own recognition of the privilege she possesses. When Maura confronts her friend Davina (Alexandra Billings) about her taste in men, Davina rejects her input, reminding Maura that her familial support, wealth and good health protect her from many dangers trans women face. In reality, countless trans people face job discrimination and difficulty finding safe and affordable housing, let alone being able to get expensive procedures related to transitioning, including electrolysis, facial feminization, mastectomies and hormone therapy. Maura is the exception in many ways.

Season 3 quickly plunges into the benefits Maura’s status as a wealthy white person offers. A tumultuous attempt to save Elizah (Alexandra Grey), a depressed trans teen with whom she speaks on the phone, sees Maura head into South Central Los Angeles, mistakenly assume three trans Latinas are sex workers, and obliviously steal a Gatorade—a crime she’s chased down for by two employees who misidentified her gender. The season premiere is sticky with Maura’s misguided efforts and lifelong privileged experiences, serving up uncomfortable truths about intersectionality surrounding race and class.

This is the lesson Transparent effectively teaches: Being a part of one marginalized category of people does not make you an informed expert on all disenfranchised groups. Being a woman does not convert to expertise on the struggles of all women; being queer does not translate to knowing the unique challenges of being trans; and in Maura’s case, living as a white trans woman does not automatically render an understanding of the additional adversity that trans women of color face.

Yet even with all her privilege, Maura soon faces a heartbreaking reality. After making the huge decision to undergo gender reassignment surgery, she is informed that her health conditions prohibit her from it. And just as so many trans people do, and for so many different reasons, she will have to navigate what it means to feel authentic when your body cannot be altered in the way you need.

There are smaller discussions the show gently provokes, too. For instance, Josh’s sexual abuse by his older babysitter Rita has explosive, complex consequences. Having impregnated his abuser in a subplot reminiscent of Mary Kay Letourneau, repeatedly brushed aside by society, Josh spouts the pervasive false narrative that he was living the dream of all teenage boys.

Josh’s dysfunction in relationships combined with confusion over unknowingly fathering a child while still a child himself weave into his development, asking the viewer to simultaneously take into account reality and his view of it. In Season 3, this comes full circle, with Josh granting Rita his forgiveness—a move that is not one she, nor any abuser, necessarily deserves but one that finally shows Josh’s acknowledgment of his own rape. Rita responds by killing herself—an action that sends Josh into yet another spiral, this time with Maura’s beautiful friend Shea (Trace Lysette) along for ride. But unlike the women he’s previously used during his self-exploration, she refuses to be his adventure.

There is Ali, the youngest Pfefferman child, whose exploration of sexuality and gender offers a look at what it’s like to be a young person struggling with an ever-evolving identity in a world that values definitive labels. Initially investigating her queerness in Season 2 through a relationship with her female best friend Syd (Carrie Brownstein), she finds herself both idolizing and lusting after poet and moderate TERF Leslie Mackinaw (Cherry Jones), with whom she continues a dysfunctional relationship in Season 3.

It is deeply apparent that the second season took into account many of the concerns people had with the show’s first and not just within the story itself. Its first transgender writer, musician Our Lady J, joined the staff after taking a private screenwriting workshop with Soloway herself. “[Soloway] acknowledged that there was a lack in the number of trans people who were writing and working in Hollywood,” Our Lady J told the LA Times in December 2015. “She wanted to teach us all the tools so we can write our own shows or be staffed on other shows.”

Indeed, Transparent has become one of the most trans-inclusive shows on television, with over 50 trans and gender-nonconforming cast and crewmembers. Still, concerns have been repeatedly raised that no amount of brilliant dialogue or character development can fix, the casting of Tambor being one of the largest.

Soloway has stated that if she could do things over, she would cast a trans woman as its lead. “I would unequivocally say it is absolutely unacceptable to cast a cis man in the role of a trans woman. Ever,” she told TV Insider. “I know that sounds ironic coming out of my mouth, but at this point, I would throw that down as absolute.” Yes, Transparent has evolved to make strides in Hollywood’s very cisgender, very straight, very whitewashed world, but it’s also shown what happens when a film or show doesn’t include enough of the people it seeks to portray in its planning and production from the very beginning.

Even Tambor acknowledges this, having told the 2016 Emmys audience that he would be happy to be “the last cisgender male to play a transgender female,” subsequently urging filmmakers to give transgender actors opportunities.

One can hope that his sentiments are reflected in Hollywood soon and the days of the industry’s Jared Letos and Eddie Redmaynes portraying trans women will soon be over. But progress is more than trans people telling trans stories—it’s casting trans actors as characters whose arch is not simply about being transgender. It’s casting trans actors as the complex lead, romantic interest, scientist or the geeky friend. With its highly inclusionary cast and team, Transparent will hopefully open doors for future talent to break into an industry that has systematically excluded them.

Having been renewed for a fourth season, the question is, How Transparent will next move the conversation forward. Now that we know Maura is unable to undergo the surgery she desperately desired, her path to happiness as a woman—and how she defines it with regard to herself—remains to be seen. ν 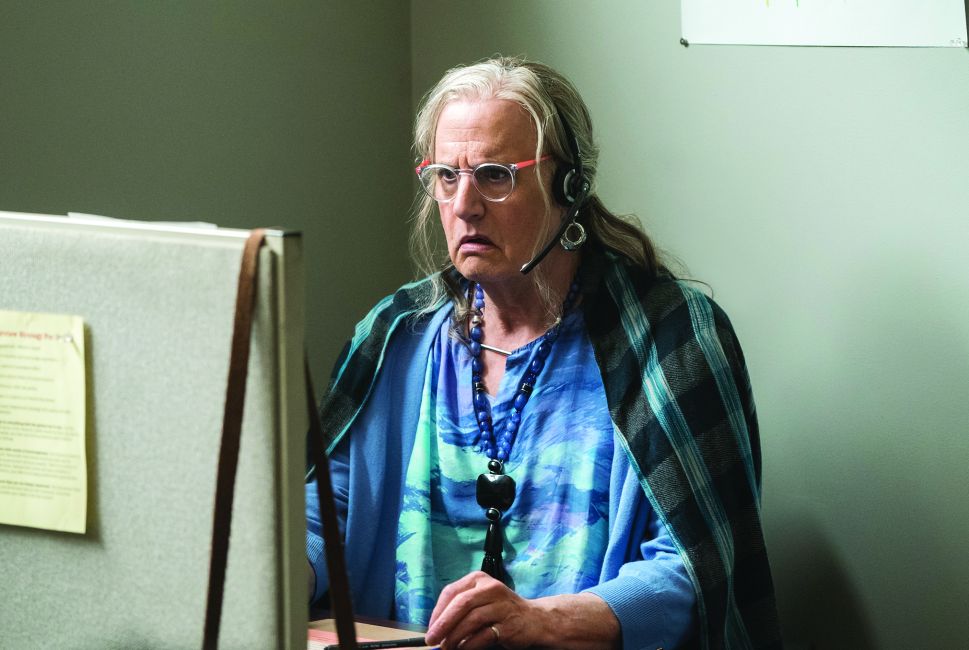